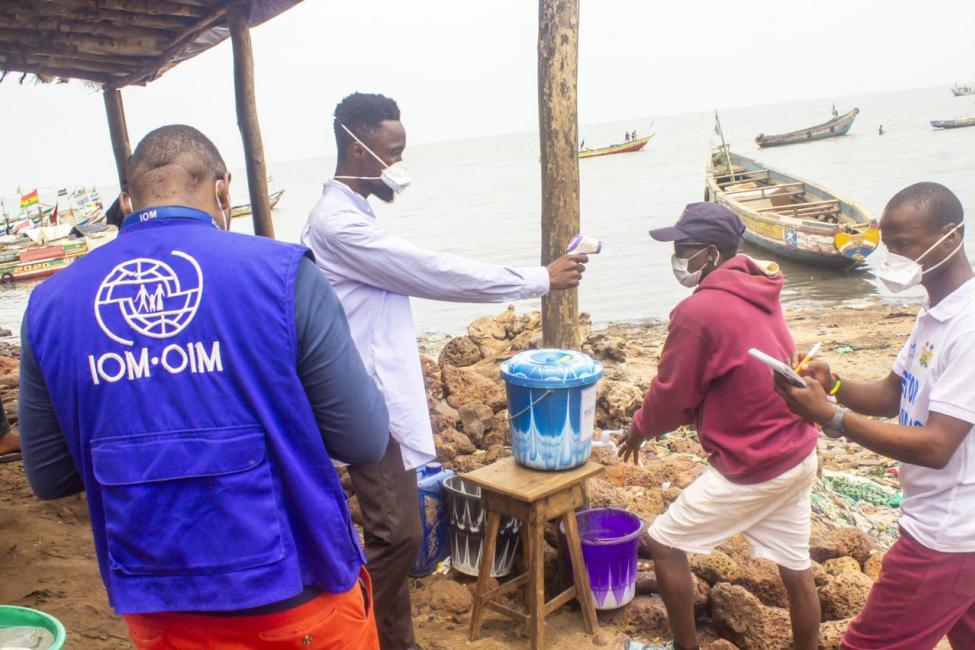 Freetown – With more than 14,000 Ebola cases and nearly 4,000 deaths, Sierra Leone was one of the hardest hit countries by the 2014 – 2016 outbreak. Ebola overwhelmed the country’s fragile public health system, which was still rebuilding after a brutal civil war, and struggling to meet demands for additional healthcare practitioners.

Now Sierra Leone faces COVID-19. As of 7 May, there were 225 confirmed cases and 14 deaths related to COVID-19 in the country.

These numbers, actually, are low compared to other countries in the region. That’s in part because of what Sierra Leone learned from the Ebola outbreak.

Sierra Leone developed a COVID-19 preparedness plan three weeks before its first case was confirmed. This enabled the Ministry of Health to quickly identify, test and quarantine most of the primary contacts of the index case, thereby limiting spread of the disease.

In a region known for its porous land borders and high degree of cross-border trade, disease surveillance and health screening are key to detection and referring potentially ill travelers to adequate healthcare structures to limit the spread of any disease. Engaging with communities in high risk border areas, crowded urban slums and informal settlements also plays a significant role in further preventing the spread of a disease.

In 2016, after the Sierra Leone became Ebola-free, the country counted 156 doctors and 5,668 nurses for a population of just over 7 million people, according to the World Health Organization. Although the human resources are still limited, since then, the Sierra Leone government has made substantial improvements to its public health system, especially in response to COVID-19. As of 9 April, there were 130 hospital beds available for COVID-19, 200 oxygen concentrators and 15 beds for patients needing intensive care.

Sierra Leone, with other countries hard hit by Ebola, received other support from the international community allowing for the deployment of treatment centres and the training of frontline workers in infection prevention and control. The revitalization of the country’s disease surveillance system, the establishment of emergency operation centers (at both at national and district levels), and the development of strong networks to support community outreach and mobilization also played crucial roles in putting the country in better share to withstand the contagion.

When COVID-19 broke out, these measures were immediately upgraded and applied to stem the propagation of disease in the country. Even before the first case of COVID-19 was signaled in the country on 31 March 2020. IOM worked closely with Sierra Leone’s Ministry of Health (MOH) through emergency operation centers set-up during the Ebola crisis, to support the country’s preparedness and response to COVID-19.

“We are now revamping our infection prevention training, social mobilization and health screening in local communities especially in border areas with our network of volunteers to ensure that everyone, regardless of social class, is informed and empowered to protect themselves and their loved ones against the disease,” Dr Bagonza said.

IOM conducted a rapid vulnerability assessment of the 16 districts of Sierra Leone in collaboration with the MOH. At the Ministry’s request, IOM trained and deployed 60 community health workers equipped with infection prevention and control (IPC) materials to conduct health screening and communication activities at prioritized locations such as ports and ground crossing points in five of the country’s districts.

Back in 2014, the first case of Ebola was recorded in Kailahun, a town located about 320 kilometers from Freetown but less than 10 kilometers from the border with Guinea. “IOM’s priority is to reinforce and reactivate health screening at high volume informal crossing points in coastal areas as well as wharfs in border areas with high economic activity were people from neighboring Guinea and Liberia continue to enter Sierra Leone despite border closures,” Dr Bagonza explained.

Hard-to-reach border communities and coastal areas are particularly vulnerable to COVID-19 because of limited access to information and the lack proper healthcare infrastructures and personnel to adequately screen and quarantine suspected cases. To ensure that everyone has access to lifesaving information on IOM works with youth, community leaders and returning migrants to raise awareness on COVID-19 preventive measures in these areas.

In total, more than 200,000 people have been reached in crowded Freetown, in informal settlements, coastal communities and border areas. Returning migrants also joined the fight against COVID-19 and recorded a song to encourage communities to adopt and respect preventive measures.

IOM’s response to COVID-19 in Sierra Leone is supported by the Governments of the Netherlands, Japan and the United States.