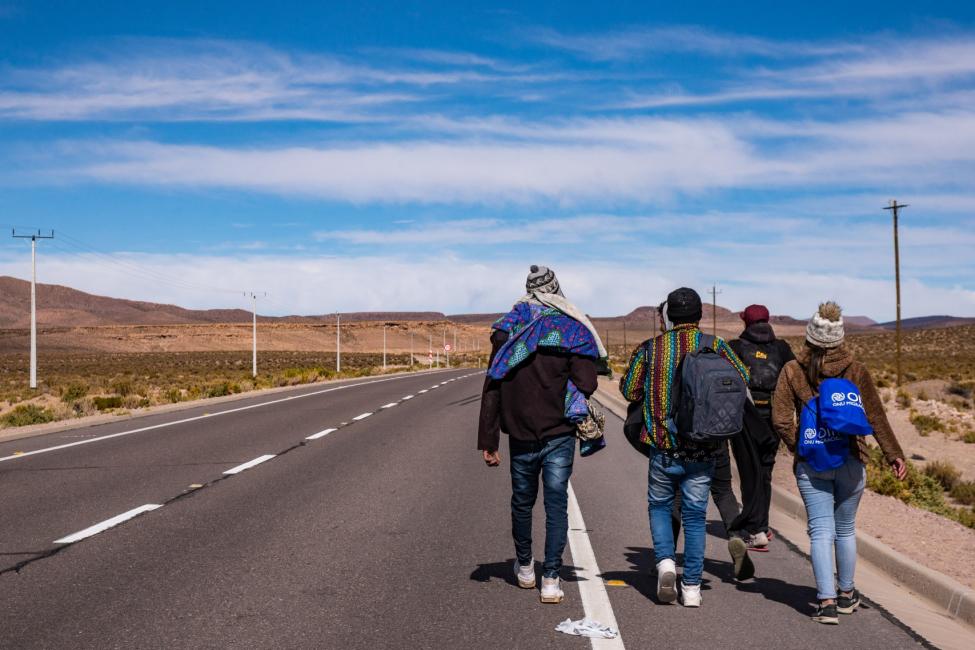 Findings will be discussed during webinar at 10 a.m. ET / UTC-4 TODAY

WASHINGTON – The socio-economic integration of Venezuelan refugees and migrants being hosted by countries in Latin America has been set back by the COVID-19 pandemic, according to a new study that examines key issues such as economic inclusion, social cohesion and access to education and health care.

The findings draw from a new analysis of Displacement Tracking Matrix (DTM) and other data by the Migration Policy Institute (MPI) and the International Organization for Migration (IOM). The report explores the progression of socio-economic integration of refugees and migrants from Venezuela over three periods between 2017 and 2021 in Brazil, Chile, Colombia, Ecuador and Peru, which host more than 70 per cent of the 5.6 million Venezuelans who have left Venezuela since 2015.

The report finds Venezuelans in the five case-study countries experience unemployment at higher rates than the receiving-country population, with many losing jobs during the pandemic. The public-health crisis also has taken a toll on newcomers’ income, with Venezuelans surveyed in Colombia, Ecuador and Peru last fall reporting a more than 50 per cent drop since the onset of the pandemic in March 2020. Irregularity has also been a significant obstacle to integration in Ecuador and Peru during the pandemic.

With more Venezuelans reporting in surveys their intention to remain in their receiving countries, the report underscores the need for governments to transition from short-term humanitarian responses to longer-term integration policies.

“While countries in the region have engaged in creative and often ad hoc policies to regularize their Venezuelan populations, significant shares still lack regular migration status. This suggests the need to redouble efforts to provide access to regular immigration status,” said MPI President Andrew Selee. “These findings demonstrate the importance of improving the credential recognition processes for refugees and migrants from Venezuela as a fundamental part of their socioeconomic integration.” In turn, Venezuelans contribute positively to the GDP of those countries that receive them, he said.

The IOM Director General’s Special Envoy for the Regional Response to the Venezuela Situation, Diego Beltrand, said: “Therefore, from the R4V Regional Coordination Platform jointly led by IOM and UNHCR, it is important to continue supporting the socioeconomic integration of this population, which requires USD 256 million, 18 per cent of the total requested in the Regional Response Plan for Refugees and Migrants from Venezuela 2021.”

Among other findings of the report, Socioeconomic Integration of Venezuelan Migrants and Refugees: The Cases of Brazil, Chile, Colombia, Ecuador, and Peru:

“As Venezuela’s political crisis continues and the broader region grapples with the economic fallout of the COVID-19 pandemic, Venezuelan migration is unlikely to stop any time soon,” said MPI analysts Diego Chaves-González, Jordi Amaral and María Jesús Mora. “It is crucial that the region’s governments make a concerted effort to promote the socio-economic integration of Venezuelan migrants and refugees and that the international donor community supports them in doing so.”

Read the report here. It is also available in Spanish.

The report marks the latest research collaboration between MPI and IOM, using DTM data to map experiences for Venezuelan migrants and refugees. An earlier fact sheet used DTM data to paint a picture of the differing socio-economic profiles, living conditions and future intentions regarding settlement or onward movement for Venezuelan expatriates in 11 Latin American and Caribbean countries.

The IOM Director General’s Special Envoy for the Regional Response to the Venezuela Situation, Diego Beltrand; MPI President Andrew Selee; Organization of American States (OAS) Department of Social Inclusion Director Betilde Muñoz-Pogossian; Marcos Maia, Director of the Management Department of Brazil’s National Secretariat of Social Assistance; and Unión Venezolana en Perú President Oscar Pérez are among the experts who will discuss the situation for Venezuelan migrants and refugees, as well as the report findings, during a webinar (English and Spanish, with simultaneous interpretation) at 10 a.m. ET / UTC-4 TODAY. For a list of speakers and to register, click here.