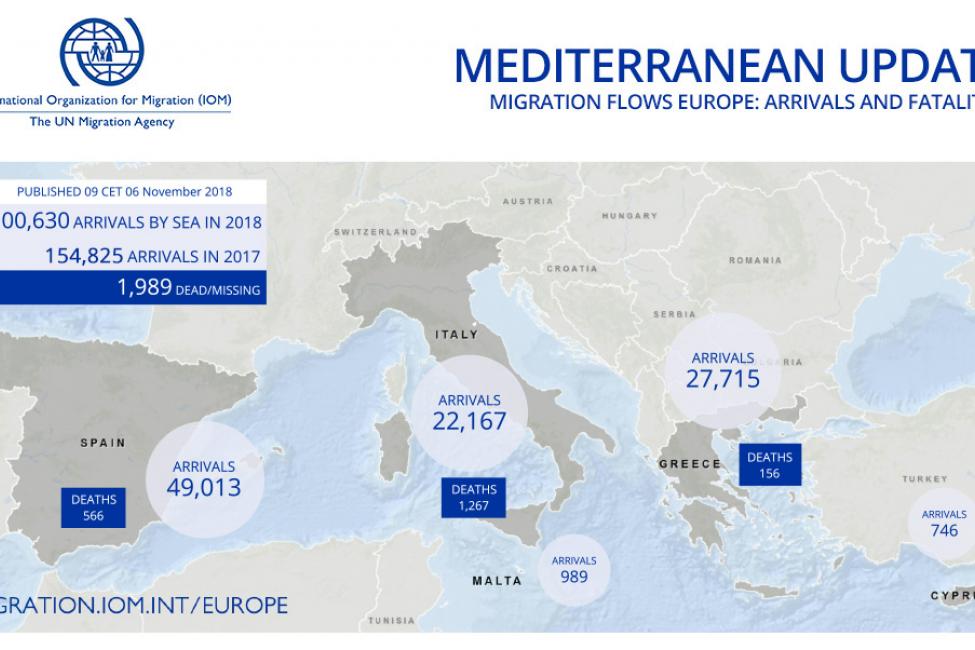 Geneva — IOM, the UN Migration Agency, reports that 100,630 migrants and refugees entered Europe by sea in 2018 through 4 November, including 49,013 to Spain, the region’s most active destination point this year, with just under 50 per cent of all 2018 arrivals. The region’s total arrivals through the recent weekend compare with 154,825 arrivals across the region through the same period last year, and 337,773 at this point in 2016 (see chart below).

This marks the fifth straight year arrivals of irregular migrants and refugees have topped the 100,000 benchmark – although in all previous years that arrival threshold was reached much earlier in the year. Last year that quantity of arrivals was reached in July, just as was the case in 2014. In 2015 Mediterranean arrivals reached 100,000 in June. In 2016 the number was reached in February.

IOM Italy’s Flavio Di Giacomo reported Monday Italian authorities have released data on the nationalities of those arriving by sea from North Africa through the end of October. The largest single sending country continues to be Tunisia, with almost 5,000 arrivals – almost all of whom are thought to be arriving in Italy directly from their own country.

Among the main arrivals coming from Libya are two from the Horn of Africa – Eritreans and Sudanese – and, from West Africa, citizens of Guinea, Mali, Côte d'Ivoire and Nigeria – all of those in numbers considerably below those posted in previous years (see chart below). Pakistan, Algeria and Iraq were also among the leading sender nations. IOM Libya reported this week that the total number of vulnerable migrants rescued or intercepted at sea by the Libyan Coast Guard through the end of October was 14,377 – or close to the number (14,349) who have agreed to Voluntary Humanitarian Return departures from Libya since the start of the year.

IOM Libya also reported this week that during the last two weeks of October the organization’s staff had been able to assist 1,600 migrants in four different Libyan detention centres, and 93 more at disembarkation points along the Libyan coast.

IOM Spain’s Ana Dodevska reported Monday total arrivals at sea in 2018 have reached 49,013 men, women and children who have been rescued in Western Mediterranean waters through 4 November (see chart below). IOM Greece’s Christine Nikolaidou reported Monday that over five recent days (Wednesday, 31 October through Sunday, 4 November), the Hellenic Coast Guard (HCG) reported there were at least 10 incidents requiring search and rescue operations off the islands of Samos, Lesvos and Kos. The HCG rescued a total of 406 migrants and transferred them to the respective islands.

Additional arrivals of 219 migrants or refugees to those same islands – as well as to Rhodes – over those recent days brings to 27,715 the total number of arrivals by sea to Greece through 4 November (see chart below).

This week IOM’s Missing Migrants Project team recorded in the Eastern Mediterranean another death connected to the shipwreck of 22 October, when a boat carrying 34 people capsized off the coast of Bodrum, Turkey. Tragically, three children died at the hospital in Bodrum: two Palestinians and one Somali. About 27 per cent of the deaths documented this year in the Aegean Sea have been of children.

Worldwide, IOM’s Missing Migrants Project estimates that at least 3,123 people died or went missing on migratory routes across the globe in 2018, the fifth consecutive year that more than 3,000 fatalities were recorded (see chart below). In the Mediterranean, the remains of two men were recovered on the beaches of Morocco and Spain.  On 29 October, the body of a Tunisian man was found on a beach outside of Nador.  It is believed that he tried to reach Melilla (Spanish territory) from Morocco by water.  In the early hours of Monday this week, an unidentified man's body was found on the beach at Barbate, in southern Spain.  He is believed to be a migrant who was trying to reach Spain from Morocco across the Strait of Gibraltar, although so far it is unclear what happened to the boat on which he was travelling.

Elsewhere over the weekend, a man trying to cross into the US from Mexico drowned in the Rio Bravo near El Indio, Maverick County, Texas.  Last week, a Honduran man died of cardiac arrest soon after crossing the border into Starr County, Texas, where he was rescued by the US Border Patrol. The MMP also recorded the death of a 21-year-old Mexican man, who was found dead in the Sawtooth Mountains in southern California in mid-September. That young man was identified, and his remains are being repatriated to his family with the help of the local Mexican Consulate.

An Iraqi woman and her two children remain missing after trying to cross the Evros River from Turkey into Greece on 25 October.  The woman’s husband survived the crossing and alerted authorities that his loved ones were lost in the waters.  Also, on 25 October, on the land border between Turkey and Greece, an unidentified migrant was killed when he was hit by a train outside Alexandroupolis, Greece.