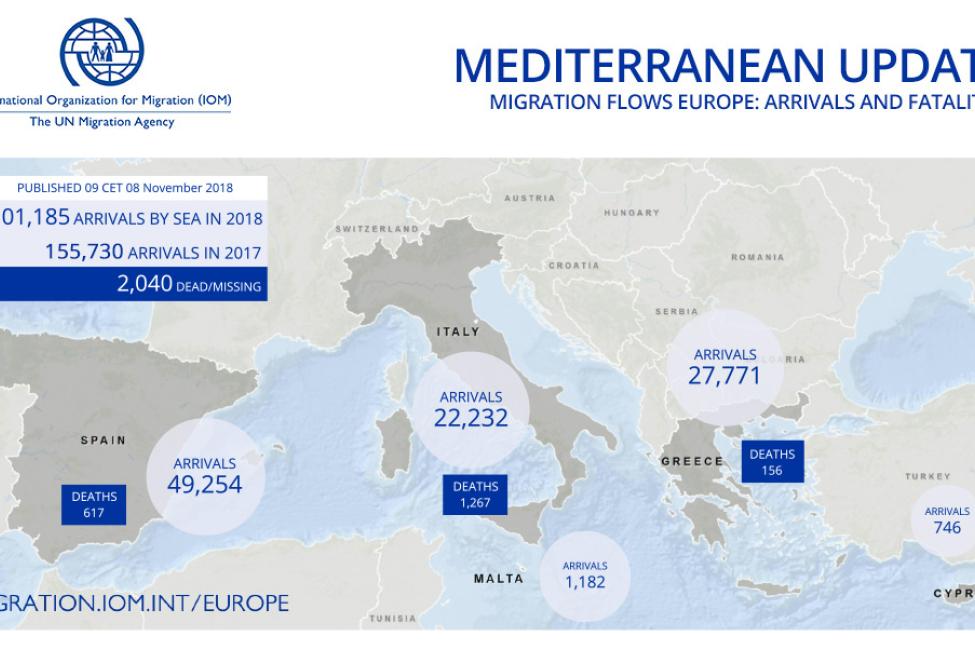 Geneva – IOM, the UN Migration Agency, reports that 101,185 migrants and refugees entered Europe by sea in 2018 through 7 November, including 49,254 to Spain, the region’s most active destination point this year, with just under 49 per cent of all 2018 arrivals. This marks the fifth straight year arrivals of irregular migrants and refugees have topped the 100,000 benchmark – although in all previous years that arrival threshold was reached earlier in the year.

Researchers for IOM’s Missing Migrants Project (MPP) noted that this week marks the death, just over 30 years ago, of a Moroccan man whose body washed up on the beaches of Tarifa. That victim today is considered the first person to die while trying to migrate across ‘El Estrecho’, from North Africa to Spain.

So far in 2018, at least 617 people have lost their lives in this same crossing. This week alone, at least 52 people died or were lost at sea in the Western Mediterranean. In the early hours of Monday, an unidentified man's body was found on Los Caños beach in Barbate, in southern Spain. Since then, the bodies of six more men have been recovered in the area by Spain’s Coast Guard, Salvamento Marítimo, and at least 14 remain missing. All those on this boat are thought to be from North Africa.

Also, on Monday, another two boats of people trying to reach Spanish territory of Melilla sank off the coast. In total, 80 people (75 men and 5 women), mostly from Sub-Saharan Africa, were rescued and brought to Melilla, along with the remains of 13 of their fellow passengers.  Based on testimonies of survivors, at least 31 remain missing.

IOM Spain’s Ana Dodevska reported Monday total arrivals at sea in 2018 have reached 49,254 men, women and children who have been rescued in Western Mediterranean waters through 7 November (see charts below). IOM Greece’s Christine Nikolaidou said Thursday that from Tuesday (6 November) to mid-day Thursday, the Hellenic Coast Guard (HCG) reported there were at least four incidents requiring search and rescue operations off the islands of Samos, Farmakonisi and Rhodes. The HCG rescued a total of 113 migrants or refugees and transferred them to the respective islands.

Those arrivals bring to 27,771 the total number of arrivals by sea to Greece through 7 November (see chart below).

Worldwide, IOM’s Missing Migrants Project has recorded 3,180 people who have died or gone missing on migratory routes across the globe in 2018 (see chart below). Beyond the Mediterranean this week MMP also recorded two people who died trying to reach Mayotte from the Comoros Islands. In mid-September, a girl’s body was found on the coast of the island, and on 3 November, the body of a man.  Both remain unidentified. The boat journey of approximately 230 kilometres from the Comoros Islands to the French territory of Mayotte remains an active and dangerous migration route.

In the Americas, two men who had left their homes in El Salvador to migrate north, lost their lives. One man was killed when he fell of the train he was riding in Tabasco, Mexico, while the second man died of fatigue and dehydration in San Marcos, Guatemala. He was travelling with the “Caravan of Migrants” at the time. The deaths of two young men (ages 16 and 17) in February were also recorded. They died when the plane in which they had stowed away took-off from Guayaquil, Ecuador.  The plane was en route to New York City.