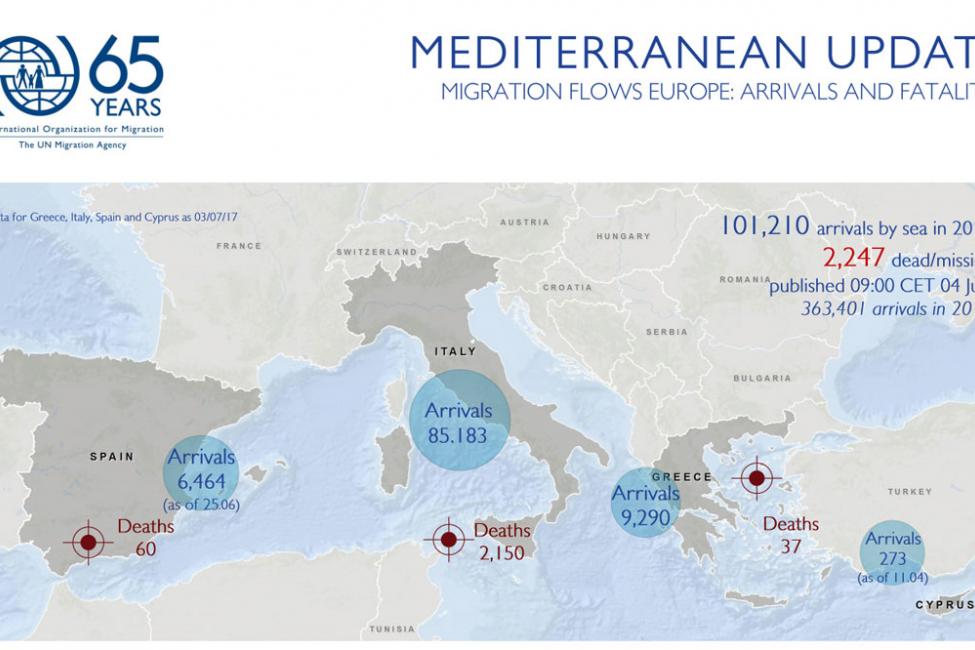 Switzerland - The UN Migration Agency (IOM) reports that 101,210 migrants and refugees entered Europe by sea in 2017 through 3 July, with almost 85 per cent arriving in Italy and the remainder divided between Greece, Cyprus and Spain. This compares with 231,503 arrivals across the region through 3 July 2016.

IOM Rome spokesperson Flavio Di Giacomo reported that on Friday, 30 June, 80 survivors brought to the Italian port of Brindisi told IOM staff that their dinghy with approximately 140 people on board capsized; an estimated 60 migrants went missing. Di Giacomo noted that, through the first six months of 2017, only in January did fewer migrants arrive on Italian shores than did in each of the first six months of 2016. Except for the month of April, this year’s flows have also exceeded all the arrivals reported in 2015. (See chart below.)

IOM Libya's Christine Petré reported that on 3 July the remains of four men of African origin were retrieved by the Libyan Red Crescent in Tajura, east of Tripoli. So far this year, the remains of 340 men, women and children have been found along the coast of Libya while this year over 10,000 migrants have been rescued in Libyan waters.

Worldwide, the IOM Missing Migrants Project (MMP) reports that there have been 3,047 fatalities through 2 July this year (see chart below) with the Mediterranean region accounting for the largest proportion of deaths – almost three quarters of the global total.

In the past few days, MMP regional figures have added: 60 missing in the Central Mediterranean as reported by survivors disembarked in Brindisi, Italy; nine bodies recovered during last week’s rescue operations and taken to Catania, Italy, by a Swedish Coast Guard ship; two drownings in Rio Bravo and four bodies retrieved in Tajura, Libya.