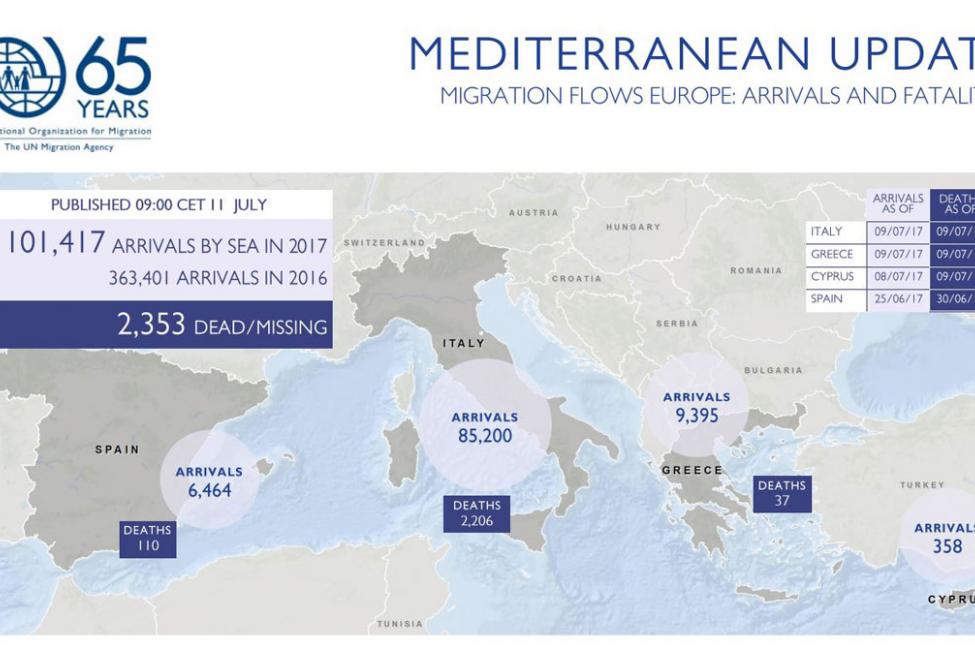 Switzerland – The UN Migration Agency (IOM) reports that 101,417 migrants and refugees entered Europe by sea in 2017 through 9 July, with almost 85 per cent arriving in Italy and the remainder divided between Greece, Cyprus and Spain. This compares with 239,492 arrivals across the region through 9 July 2016. OM Rome spokesperson Flavio Di Giacomo reported that as of 9 July, 85,200 migrants arrived by sea to Italy – just under 10 per cent above levels compiled through the same period last year. IOM reported that over the past weekend some 140 migrants had been rescued at sea and were brought to Italy Monday.

IOM Rome Monday released nationalities’ breakdowns for arrivals by sea during the first six months of 2017 (see chart below). Nigerians comprised the largest group, with over 14,000 arrivals, followed by citizens of Bangladesh, with 8,241. That is roughly the same total for all Bangladeshis arriving in 2016. Guinea, Cote d'Ivoire, Gambia, Senegal and Mali all showed increases in arrivals compared with the same period last year, as did Morocco. Both the Sudan and Eritrea showed sharp declines – the latter by nearly 50 per cent, from 9,016 arrivals in 2016 to 4,536 so far this year. Late Monday IOM Rome learned 767 migrants had been rescued yesterday in seven separate operations led by military and NGO vessels. IOM Athens, meanwhile, reported this week that since IOM’s last report on 7 July, just 16 individuals arrived by sea to any of the Greek islands.

IOM Rome’s Di Giacomo said that on 8 July, 65 migrants were rescued east of the Tripoli by Libyan fishermen operating off Garaboli. Based on the migrants’ eyewitness testimony, around 35 people went missing whom fishermen were unable to save.

IOM Libya’s Christine Petré had further details from that incident, reporting that among the migrants rescued are 13 women and unaccompanied minors, as well as 11 cases with burn injuries, four of whom required hospitalization.

IOM Libya also had this detail regarding a recent incident in Libya’s eastern desert: According to the Libyan Red Crescent in Tobruk, the total number of migrants found dead in the desert is close to 40. So far the Red Crecent has recovered and buried 21 bodies, 20 of which were identified as Egyptian, with the one remaining individual found without identification papers leaving his country of origin unconfirmed. There are remains of other victims still in the desert, IOM’s Petré explained, as the Libyan Red Crescent lacks proper vehicles necessary to recover them.

Additionally, IOM’s Missing Migrants Project (MMP) this week reported that the remains of a total of 33 migrants were recovered off the shores of Tunisia during the month of June. Added to the 14 discovered in May, MMP noted that these confirmed deaths of 47 migrants over the past two months far exceeds the total (18) for all of 2016 and nearly matches the 50 recorded in all of 2015. MMP said 46 migrants were discovered dead along Tunisia’s shores in 2014.

Worldwide, the IOM Missing Migrants Project (MMP) reports that there have been 3,223 fatalities through 9 July this year (see chart below) with the Mediterranean region accounting for the largest proportion of deaths – almost three quarters of the global total.

The more than 100 victims recorded in MMP’s database since IOM’s last report on 7 July include: 40 migrants found dead in the Jaghbough desert south of Tobruk, Libya; 35 missing from a shipwreck off the coast of Libya; 10 bodies recovered on coast of Tunisia; and two drownings along the US-Mexico border.