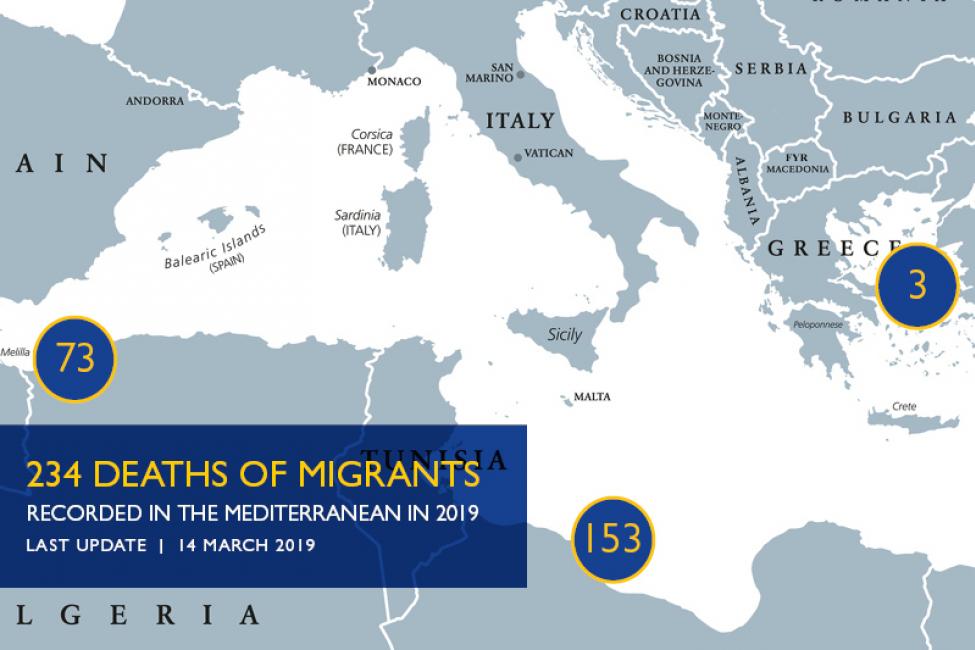 Geneva – The International Organization for Migration (IOM) reports that 10,308 migrants and refugees have entered Europe by sea through 13 March, a 16 per cent decrease from the 12,318 arriving during the same period last year. Deaths on the three main Mediterranean Sea routes through just over ten weeks of the new year are at 234 individuals – or about half the 466 deaths that occurred during the same period in 2018. (see chart below) IOM Rome’s Flavio Di Giacomo on Thursday reported a total of 335 migrants and refugees have landed in Italy this year, according to official Ministry of Interior figures. He added that since 1 January 2019, a total of 930 migrants have been returned to Libya by the Libyan Coast Guard – or three times the total arriving by sea to Italy.

IOM Spain’s Ana Dodevska reported that through 13 March, 5,222 men, women and children have arrived as irregular migrants since the start of this year – an average of some 73 per day. Through this period, irregular migrant arrivals by sea to Spain are just about 51 per cent of all Mediterranean arrivals of this type.

IOM Greece reported on Thursday (14/03) that in the week since Friday (08/03), the Hellenic Coast Guard (HCG) was involved in at least six incidents requiring search and rescue operation off the islands of Samos, Lesvos and Farmakonisi. The HCG rescued a total of 239 migrants and transferred them to those ports.

Those 239 arrivals were among some 296 IOM recorded since last Friday arriving at the islands of Farmakonisi, Kos, Rhodes, Lesvos, Samos and Chios and bringing to 4,483 the total number of sea arrivals to Greece this year, a 26 per cent increase in arrivals compared to this same time last year (see chart below).

IOM Greece also provided data this week on nationalities of all irregular migrants detected by the Hellenic Coast Guard through the end of February. Of some 3,614 arrivals, just over half (1,914 men, women and children) were Afghan with 411 arriving from Iraq, 399 from the Palestinian Territories and 320 from Syria. Smaller groups arrived from Congo (114), the Islamic Republic of Iran (81), the Democratic Republic of the Congo (75), Cameroon (47), Yemen (26), Eritrea (13), Angola (9) and the Dominican Republic (2).

So far in 2019, Missing Migrants Project has recorded the deaths of 458 people, at least 234 of those on one of three Mediterranean Sea routes (see chart below).

Since the last week, MMP said that on 9 March in the Central Mediterranean, IOM Libya reported that the remains of an unidentified person were recovered in Almaya, Libya. The day before (8/03), migrants intercepted by the Libyan Coast Guard off the coast of Libya reported two missing people who had fallen into the water before that rescue operation.

In the Eastern Mediterranean, the remains of a woman and a girl were recovered on 10 March in different locations on the Greek island of Lesvos: a 9-year-old girl from Afghanistan was found dead near Vatera, on the south shore of that island, while a woman, also from Afghanistan, was found near Agios Theodoros, on the north.

MMP this week has been compiling details on a truck accident in Mexico that killed 24 Guatemalan men and women on 7 March. It appears the driver lost control of the truck causing it to overturn near the town of Soyaló in Mexico’s southern state of Chiapas. Ten women and 13 men lost their lives during the crash, while another woman died later in a nearby hospital. During the crash, 33 others were injured and transported to hospitals in Tuxtla Gutiérrez, of which seven remain hospitalized as of 13 March, including a 22-year-old man in critical condition.

At the time of writing, 19 of the 24 people who died had been identified. Details regarding the identity, sex and age of at least 11 of them are publicly available and summarized below. The stories, dreams and hopes of the other 13 people who died in this vehicle accident are only known to their families.

Vilma Marisol Vail Jiménez was 16 years old. She came from Los Vaíles, in the municipality of Cajolá, where she had a flower stand. The older of three siblings, she decided to go to the US when her father took ill, as her income from selling flowers could not cover his medical costs.

Navia Hernández Agustín was born in Caín, San Luis, in Guatemala’s northern department of Petén. She was travelling to the United States to join her mother, who moved there ten years ago.

Keida Morales Velázquez was a 15-year-old girl from the village of San Andrés Cheró, in the department of San Marcos. She was travelling with her older brother.

José Gregorio Francisco was 23 years old and a Q'anjob'al ethnic Mayan from the municipality of Paykonob’, near Santa Eulalia, Huehuetenango. The precarious economic conditions in his hometown forced him to attempt the journey north, where he expected to build a more prosperous future and be able to send money to his parents.

Among the other victims were Félix Jeremías Cash López and Delfino Cash Felipe, two teenage cousins from the community of Nicá, in Malacatán, in the department of San Marcos. Félix would have turned 18 on 20 March. He had just graduated from high school, but he couldn’t find a job in his hometown, so he decided to leave with his cousin to join a brother in Atlanta, Georgia.

The hometown of the two cousins, Nicá, a small municipality of ethnic Mam population, lost six members in total, all young people who aimed to secure a more prosperous future in the United States. The remains of Yesenia Magdalena Pérez and Reyna Venancia Ramos Nolasco, both 17 years old, and of Ezequiel Aldair Cash Fernández (18) and Oscar Mazariegos López (29) were repatriated and buried by their families in the local cemetery.

Ronald Alberto López Estrada was 29 years old and had been born in the municipality of Candelaria Siquival, in Guatemala’s department of San Marcos. He had graduated from high school with a specialization in mechanics. He met Marta Cardona, his girlfriend for four years, and he decided he wanted a better future for them and their future children. However, he did not survive the journey north, and lost his life just three days after saying goodbye to his family for the last time.

Migrants transiting through Central America and Mexico face many risks due to the hardships of the journey itself, which often implies taking highly unsafe means of transport. In the most tragic of cases, they do not survive the journey: MMP records show that at least 145 people have died in vehicle accidents since 2014. In 2018, MMP documented the deaths of 34 people in car crashes during transit through Central America and Mexico – in the first 11 weeks of 2019, 27 people have reportedly lost their lives in such accidents in the region.

Deaths in the Americas stand at 128, making migration corridors in the Caribbean, South and Central America among the deadliest in the world. Since 1 February, more men, women and children have died crossing the Americas in irregular migration – 79 – than anywhere else. During these last six weeks 26 people have died in the Mediterranean, nine in North Africa, eight in Europe and five in the Middle East.

It is important to note that the estimate of those 26 missing migrants mentioned above as lost since 1 February on the Mediterranean does not include another 45 missing from reports surfacing late Thursday (14/03) out of Spain and Morocco. MMP learned from sources in Spain that Moroccan authorities had only confirmed that remains of one migrant had been recovered, and 21 survivors were rescued, from a sinking boat north of Nador on Thursday. An NGO who reportedly has been in touch with seven women among the survivors who affirmed that 67 people had been on board their boat. IOM continues to investigate these reports.

Elsewhere in the world, MMP recorded the deaths of several people along different migration routes. In Europe, a young Ethiopian man was found dead inside a truck in the Port of Calais on 8 March. The autopsy conducted by French authorities indicates that he likely died crushed when the cargo in the back of the truck moved during transport. In Serbia, a 30-year-old Algerian man was electrocuted as he attempted to jump on the top of a train near the city of Šid, near the border with Croatia.