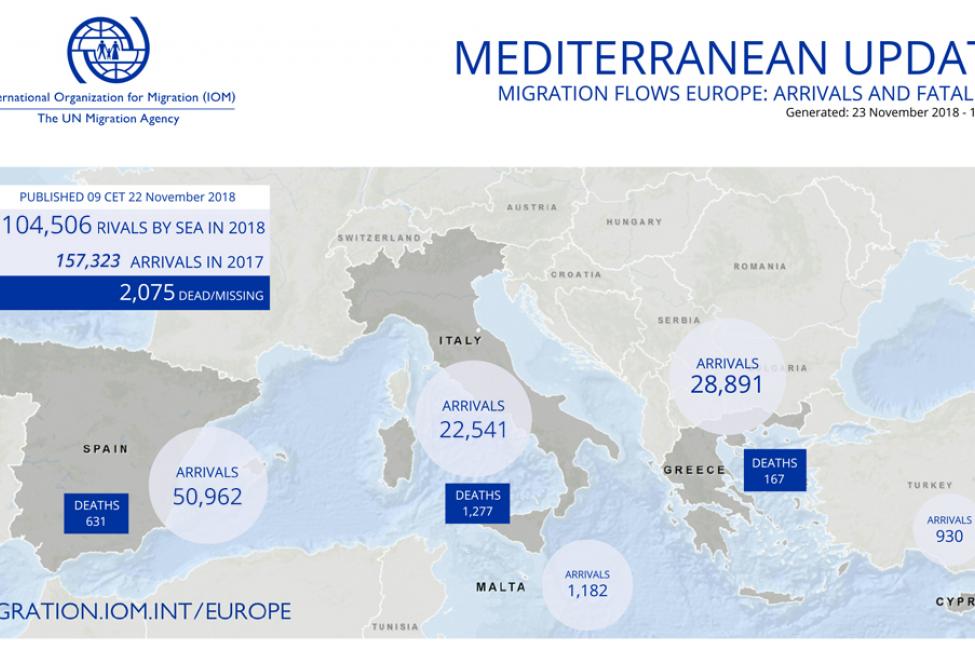 Geneva – IOM, the UN Migration Agency, reports that 104,506 migrants and refugees entered Europe by sea in 2018 through 18 November. Spain topped 50,962 – more irregular arrivals to Spain through 45 weeks of 2018 than all arrivals during the past three years combined.

As colder weather conditions arrive, the sea passage to Europe grows ever deadlier.

IOM’s Missing Migrants Project (MMP) has recorded 2,075 people who have died or gone missing on one of three migratory routes across the Mediterranean in 2018.

Most recently, at least nine people lost their lives in the Western Mediterranean. The sole survivor, a teenage boy from Guinea, was rescued off the coast of Vejer de la Frontera, Cádiz, on Monday 19 November. He told Spanish authorities that he was travelling with nine others, including his brother, in an inflatable row boat which had departed from Tangiers, Morocco over a week before. Bad weather conditions, as well as the lack of food and water, caused several people to die during the journey. Their bodies were lost at sea, this youth said.

The boy was the only survivor. He is currently in the intensive care unit in the hospital in Cádiz with severe hypothermia. The remains of two people, believed to have been on board the same boat, washed ashore on two beaches in the area: on Tuesday 20 November, the body of a woman was recovered on Playa del Palmar, while the day after, 21 November, the body of a man was found on Playa de los Corrales. Additionally, two more bodies connected to the 5 November shipwreck off the coast of Barbate, Cádiz were recovered on 19 November. At least 23 people died in that single shipwreck at the beginning of the month.

Missing Migrants also has recorded deaths these years on Spain’s other seaborne migratory route, from the West African mainland to the Islas Canarias.  Since 2014, 319 men, women and children have perished on this route (See Table 12).

Ana Dodevska reported Thursday irregular migrants to Spain continue to arrive at a rate of over 120 per day during the month of November. October was Spain’s busiest month for sea arrivals on month on record, with migrants or refugees entering by sea at a rate of over 350 people per day (See Table 2).

Antigoni Avgeropoulou reported Thursday (22 November) that since Tuesday, and through Thursday afternoon, the Hellenic Coast Guard (HCG) reported there were at least five incidents requiring search and rescue operations off the island of Samos. The HCG rescued a total of 182 migrants and transferred them to the island.

Another 60 arrivals Tuesday and Wednesday to Lesvos and Kalymnos bring to 28,891 the total number of sea arrivals to Greece this year through 21 November. That is just short of the total (29,501) arriving through all of last year, a total that appears will be surpassed in 2018 (See Table 8.b).

In the Eastern Mediterranean, IOM’s Missing Migrants Project recorded news of a boat capsized off the coast of Bodrum, Turkey on 19 November. Ten survivors (four Syrians, four Palestinians and two Egyptians) were rescued, two of them in critical condition. Tragically, a young Syrian man lost his life.

Flavio Di Giacomo reported Monday monthly arrivals to Italy have averaged fewer than 2,500 men, women and children entering Italy by sea after departing North Africa since the start of November 2017. July 2017 was the last time monthly sea arrivals of irregular migrants and refugees surpassed 10,000 men, women and children – a total that arrived in 12 of the previous 13 months before that date – and had been arriving regularly in previous years of the Mediterranean emergency (See Table 7).

IOM’s Missing Migrants Project has recorded 3,260 people who have died or gone missing on migratory routes across the globe in 2018 (See Table 3).

Beyond the Mediterranean Sea, migrant corridors in the Americas are among the deadliest in the world today.

Since the beginning of the year, the Missing Migrants Project team has documented the deaths of 354 migrants on the US-Mexico border, a slight increase over the 313 deaths recorded during the same period in 2017. On 13 November, the remains of a 34-year-old Mexican woman were found on a ranch west of Falfurrias, Texas.

On 20 November, a 17-year-old Honduran young man was hit by a vehicle as he was walking on the side of the road connecting Mexicali with Tijuana, in Mexico’s Pacific state of Baja California. He was part of the group of Central American migrants fleeing violence and poverty in large groups or “caravans,” who recently began arriving in the border city of Tijuana, intent on seeking asylum in the US.

The MMP team also recorded the death of another Honduran teenage boy, who died from pneumonia at the General Hospital of Tijuana on 21 November (See Table 3).