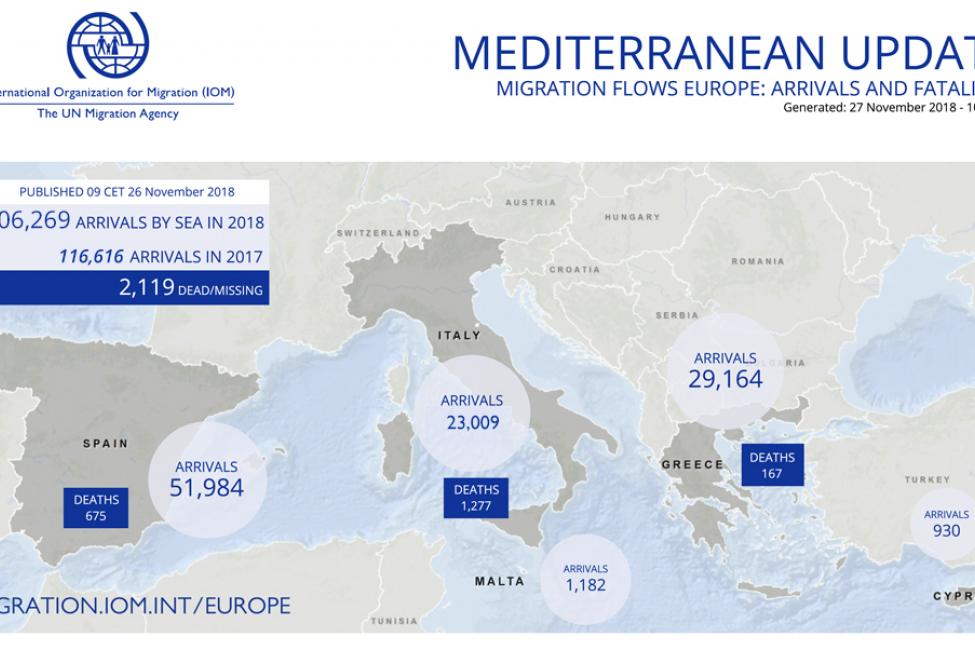 Geneva – IOM, the UN Migration Agency, reports that 106,269 migrants and refugees entered Europe by sea in 2018 through 25 November. Spain topped 51,984 – more irregular arrivals to Spain through this point in 2018 than all arrivals during the past three years combined (see Table 6)

IOM Rome’s Flavio Di Giacomo on Monday reported that on Saturday evening (24 November), a boat carrying 264 migrants arrived at Pozzallo, Sicily. The migrants remained on board for about three hours before disembarking at the port, where IOM staff provided assistance. Most of these migrants came from the Horn of Africa. Migrants on board told IOM staff of they had left Libya from the port of Misrata on the night of 22-23 November. Their wooden fishing boat was divided into three decks.

These migrants reported they had been stranded in Libya between one and two years. Many insisted they had been kidnapped and then tortured for ransom and sold several times between groups of traffickers.

"Landings with more than 200 people on board have become a rare phenomenon," said Di Giacomo, "and it is extremely unusual that such an unseaworthy boat manages to reach the Italian coasts. These are boats completely unsuited for such travel and could sink at any moment. The rescue operations at the port were in fact particularly complicated because the boat was completely unstable.”

IOM Spain’s Ana Dodevska reported that through Saturday night (24 November) 3,583 men, women and children have arrived as irregular migrants this month, or slightly more than 1,000 people per week. This is a sharp drop from October (nearly 2,500 per week) or September (almost 1,900) when deaths at sea were lower, despite the higher arrival volume (see Table 5).

As colder weather conditions arrive, sea passage to Europe is expected to grow much deadlier. IOM’s Missing Migrants Project (MMP) in Berlin noted this week that since last Friday’s (23 November) update, the Missing Migrants Project team documented the deaths of 44 people in the Western Mediterranean, bringing to 675 the total number of deaths on this route in 2018, and to 2,119 for all three Mediterranean routes.

On 22 November, MMP reported, Spanish rescue services recovered the body of a pregnant woman and rescued 42 survivors from a sinking boat off the coast of Almería. According to the survivors’ testimonies, 13 people had drowned at sea before they were rescued.

During a search and rescue operation conducted on Saturday, 24 November, 13 people were rescued in the Alboran Sea. The survivors reported to Spanish authorities that one person had gone missing during the journey. On that same day, the Moroccan Navy found the remains of 15 people and rescued 68 others from a sinking boat which had been adrift for hours off the coast of Nador, Morocco. Spanish NGO Caminando Fronteras stated that 14 people already had gone missing before that rescue operation was launched, according to the testimonies of those on board. Thus, it is estimated that 29 people lost their lives in this single incident.

In total, 110 people are known to have lost their lives in the Western Mediterranean during these 25 days of November. In the 116 days since 1 August, 367 men, women and children have perished in the waters linking North Africa to Spain. That death rate – more than three people every day – is more than double the fatalities on the Central route connecting Tunisia, Algeria and Libya to Italy, and about five times the losses recorded on the Eastern route between Turkey and Greece (see Table 12).

More people have died in the Western Mediterranean during the months of September, October and November through 25 days than died on this route during all of 2017.

IOM Libya’s Maya Abu Ata reported Monday details of three interception/rescue operations that were carried out by Libyan Coast Guard in the Mediterranean that resulted in 203 migrants and refugees being returned to Libya’s shore 23-25 November.

A total of 27 of migrants (24 men, three women). All migrants were transferred to official detention centres. There were no pregnant women or children on board nor any emergency cases. Primary healthcare was provided to the group, and most of them were suffering from stress headache, muscular pain, and fatigue.

A total of 113 migrants (91 male, 18 female and four children) including three pregnant women. Primary healthcare was provided; most suffering from general fatigue. A 23-year-old pregnant Nigerian woman suffered from lower abdominal pain and was urgently referred to a private clinic. There were no emergency cases among the migrants. All were transferred to an official detention centre.

A total of 63 migrants returned (57 men, four women, two children). Primary healthcare was provided; most were suffering from general fatigue, and cases of scabies were found. All migrants were automatically transferred to an official detention centre.

IOM Libya reports the number of people returned to Libyan shores so far in 2018 stands at 15,064.

IOM Greece reported on Monday that from Thursday, 22 November through the end of the weekend, the Hellenic Coast Guard (HCG) was involved in at least four incidents requiring search and rescue operations off the islands of Lesvos, Chios and Farmakonisi. The HCG rescued a total of 86 migrants and transferred them to those respective islands.

Another 187 arrivals between Thursday, Friday, Saturday and Sunday to Samos and elsewhere bring to 29,164 the total number of sea arrivals to Greece this year through 24 November. That is just short of the total (29,501) arriving through all 2017, a total that appears will be surpassed in 2018 (see Table 8.b).

IOM’s Missing Migrants Project (MMP) has recorded 3,308 people who have died or gone missing on migratory routes across the globe in 2018 (see Table 3).

Beyond the Mediterranean, the MMP team recorded the deaths of three men on the US-Mexico border. On Sunday (25 November), the remains of a man were recovered from the banks of the Río Bravo near Piedras Negras, Coahuila. In Tijuana, Baja California, three days earlier, a 36-year-old Honduran man was hit by a vehicle and died shortly afterwards in Tijuana’s General Hospital. On the US side of the border, US Border Patrol officers found the remains of a man in a ranch east of Hebbronville, Texas, on 19 November.

In Southern Turkey, a 5-year-old Syrian boy was killed in a vehicle accident in Antalya. This tragic accident injured at least 26 others. It took place on 23 November (see Table 3).