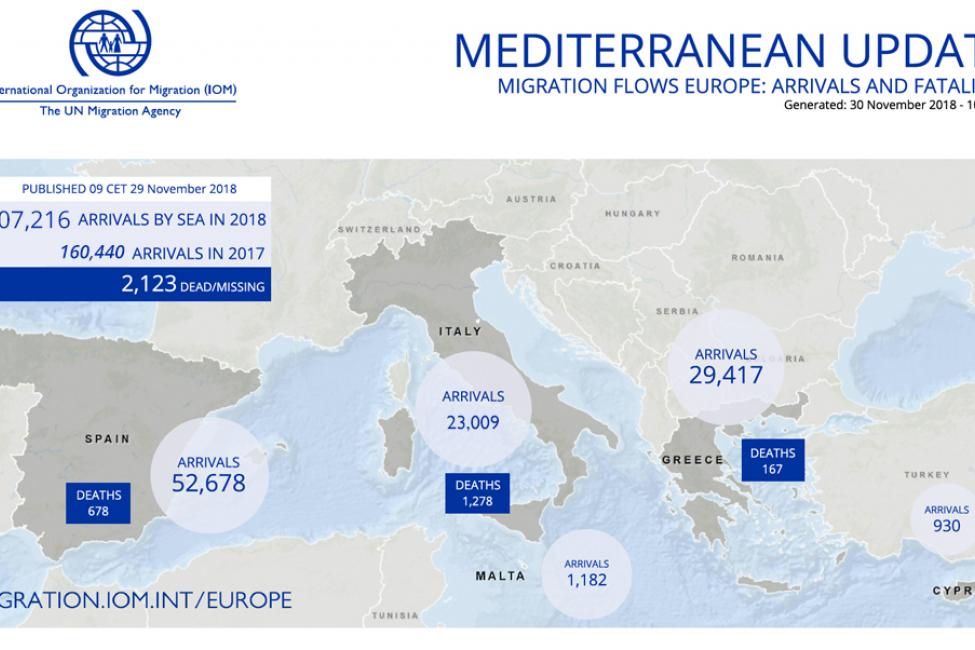 IOM Rome’s Flavio Di Giacomo on Thursday noted that all seaborne irregular arrivals in the Mediterranean region remain lower – by almost 10,000 people – than arrivals last year at this time only to Italy, which recorded 117,042 through this date (see chart below).

Di Giacomo noted as well on Thursday that a Spanish fishing boat, the “Nuestra Madre Loreto,” has been stuck at sea for six days now after rescuing 12 migrants who sailed from Libya on a dinghy earlier this month. Thus far no EU country has agreed to grant these migrants authorization to land.

IOM’s Missing Migrants Project (MMP) has recorded 2,123 people who have drowned or gone missing on migratory routes across Mediterranean in 2018.

Most recently, three people drowned in the Western Mediterranean where Spanish rescue services recovered the remains of three migrants from a sinking boat in the Alboran Sea on 28 November; 90 survivors from that voyage were disembarked in Motril, Granada.

MMP also increased by one its total of drownings on the Central Mediterranean route because it received new information about an incident that occurred on 15 November off Sardinia in which at least 10 youths from Algeria were lost. Since IOM first reported on this incident another body has been recovered. MMP now believes six victims remain missing, with four bodies recovered. Initial reports indicated only nine victims were recorded.

IOM Spain’s Ana Dodevska reported that through Wednesday (28 November) 4,277 men, women and children have arrived as irregular migrants this month, or slightly more than 1,000 people per week. This is a sharp drop from October (nearly 2,500 per week) or September (almost 1,900) when deaths at sea were lower, despite the higher arrival volume (see chart below).

IOM Greece reported on Thursday that no rescue operations have been conducted by the Hellenic Coast Guard (HCG) since at least last Tuesday (27 November) and that over two of four days this past week (25-28 November) IOM has been made aware of no new sea arrivals to Greece via the eastern Mediterranean route. On those other two days – when there were arrivals to Chios, Samos, Lesvos and Leros – a total of 253 migrants came ashore, including 89 last Sunday to Leros, an island rarely accessed by irregular migrants or the smugglers who transport them.

Those 253 arrivals (236 on Sunday and 17 on Monday), bring to 29,417 the total number of sea arrivals to Greece this year through 28 November. That is just short of the total (29,595) arriving through all last year, a total that appears will be surpassed in the coming days (see chart below).

IOM Greece’s Christine Nikolaidou also reported that land crossings to Greece by irregular migrants mainly using Turkey and Bulgaria are, through ten months of 2018, well ahead of crossings from the same period last year. During the period 1 January to 31 October 2017, 5,428 irregular land arrivals were recorded by the Hellenic Police monitoring movements either from Bulgaria or Turkey. During the same period in 2018 the same authorities recorded 15,276 irregular arrivals – nearly triple the previous year’s rate.

IOM’s Missing Migrants Project (MMP) has recorded 3,323 people who have died or gone missing on migratory routes across the globe in 2018 (see chart below).

Beyond the Mediterranean, the MMP team recorded several deaths on land routes in Europe. On 27 November, the remains of four men were found on train tracks near the town of Fylakas, in north-eastern Greece. Local authorities reported that a night train ran over the group of migrants, who may have been sleeping on the lines.  On the same day, a young Algerian man reportedly drowned in the Reka river, in Ilirska Bistrica, Slovenia. He was travelling with a group of six migrants, who were apprehended by authorities on 27 November.

A vehicle accident on Wednesday, 28 November killed a young Syrian man in the Egnatia Odos highway, near the town of Kavala, Greece. Missing Migrants Project data show that migrants are often forced to take unsafe modes of travel, as transportation accidents are the cause of 48 per cent of migrant deaths recorded in Europe in 2018.

In the Americas, four people who had left their homes to migrate north lost their lives.

On 26 November, a one-year-old baby who was travelling with his mother from their home country, Guatemala, died of pneumonia in Meoqui, Mexico. The week before, the remains of a 28-year-old Cuban woman were found off the coast of Guanaja, Honduras. She was part of a group of 18 Cuban balseros (rafters) who were trying to reach the US by boat. However, their craft capsized near Honduras’ Bay Islands, in the Caribbean Sea, and those on board were forced to swim to shore.

On 16 November, the remains of an unidentified man were found on railroad tracks near the town of Atotonilco de Tula, in Mexico’s state of Hidalgo. Another man was found dead near train tracks on 28 November in Hermosillo, Sonora. The MMP team has recorded the deaths of 39 people due to train-related injuries across Central America and Mexico since the beginning of the year.