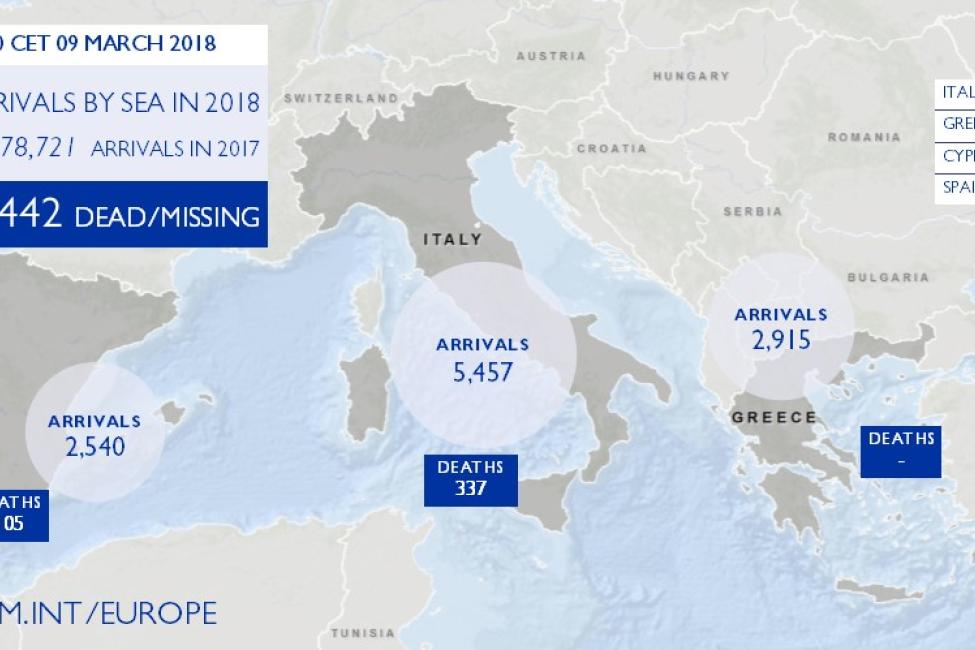 Geneva – IOM, the UN Migration Agency, reports that 10,949 migrants and refugees have entered Europe by sea through the first nine weeks of 2018, with just under 51 per cent arriving in Italy and the remainder divided between Greece (27%) Spain (22%) and Cyprus (less than 1%). This compares with 20,051 arrivals across the region through the same period last year. IOM Rome’s Flavio Di Giacomo said Monday that, according to Ministry of Interior figures, 5,457 migrants have arrived by sea to Italy this year: or barely one third the figure at this time last year, when 15,843 migrant men, women and children were brought to Italy after being rescued in the waters north of Africa. Through 7 March Italy arrivals are averaging fewer than 83 persons per day. This compares with 240 per day in 2017 and 140 per day in 2016. (see chart below).

Across the entire region, along three principal migrant routes, the dramatic drop in arrivals is reflected in the statistics as well.  In 2015 on this same date, IOM counted 143,544 irregular migrants entering Europe by sea, an average of 2,142 daily. Those numbers dropped to 134,905 (1,983 average, daily) this point in 2016 and to 20,051 (daily: 299). So far this year daily arrivals average 163 men, women and children across the zone (see chart below). IOM’s Missing Migrant Project (MMP) reported Monday that deaths on the Central Mediterranean route—442 as of March 8—were down some 15% below their total at this same time in 2017, when 521 migrants had been counted as drowned or missing in the waters between North Africa and Italy.

IOM Athens’ Kelly Namia on Thursday said that over three days ending 6 March the Hellenic Coast Guard reported no incidents requiring search and rescue operations in the Aegean and just one irregular migrant landing, on the island of Kos this past Monday.

That brings the total number of sea arrivals to Greek territory through 6 March February to 2,915 (see chart below)—an average of about 45 persons per day.

IOM Spain’s Ana Dodevska reported that total arrivals by sea in 2018 have reached 2,540 men, women and children who have been rescued in Western Mediterranean waters through 8 March. In 2017 IOM recorded 1,584 entering Spain irregularly by sea through the end of February. Sea arrivals for Spain in March 2917 totalled almost 850 for the entire month of March last year; to date this month only 38 arrivals have been recorded. IOM reports 442 migrants are estimated to have died this year on the Mediterranean Sea’s three routes. Most recently, 21 people went missing after a boat capsized off the coast of Libya on Saturday, 3 March. A Cypriot merchant vessel rescued 30 survivors from the sinking boat and transferred them to SOS Méditerranée’s ship Aquarius. IOM staff on the ground spoke with them when they were brought to Pozzallo on Tuesday, and they reported that 51 people were on the boat when it sank. Tragically, 21 migrants went missing and are presumed dead.

On the US/Mexico border, the remains of a young man were recovered from the Río Bravo near Eagle Pass, Texas on 4 March – he is thought to be part of a group of migrants that went missing on 27 February when trying to cross from Piedras Negras, Coahuila. The Missing Migrants Project also recorded the death of one Honduran migrant in Reynosa, Mexico on 1 March. On the Mexico/Guatemala border, a 47-year-old Honduran migrant was hit by a freight train in Huimanguillo, Tabasco on 5 March.

The remains of a young Afghan migrant were retrieved in the Evros/Meriç River on 6 March by Turkish authorities. He fell into the river and drowned when attempting to cross to Greece. The Missing Migrants Project has recorded the deaths of 8 people on the Evros in 2018.