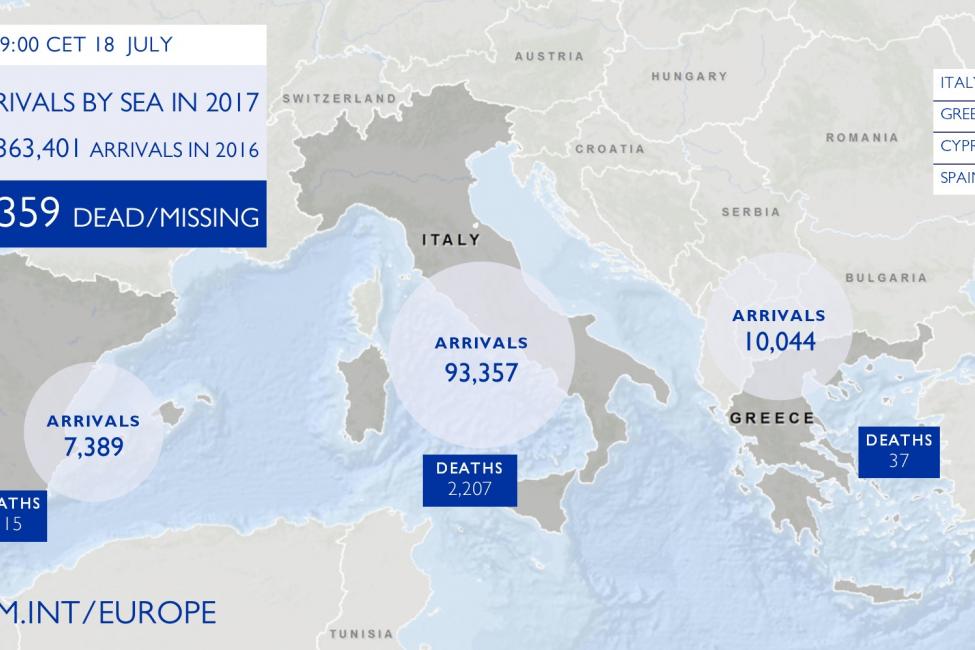 Switzerland -  IOM, the UN Migration Agency, reports that 111,148 migrants and refugees entered Europe by sea in 2017 through 16 July, with almost 85 per cent arriving in Italy and the remainder divided between Greece, Cyprus and Spain. This compares with 241,859 arrivals across the region through 16 July 2016. IOM Rome spokesperson Flavio Di Giacomo reported that 93,357 migrants had arrived in Italy by sea through Sunday (16 July) with no new rescues carried out over the weekend. The arrival figure surpasses by 13,496 the total at a similar point in 2016 – a 17 per cent increase year-on-year. Meanwhile, IOM Athens reported sea arrivals in the Eastern Aegean this week surpassed 10,000 for the year (10,044) a figure reached last year in early January, a month when over 67,000 (67,415) arrived on similar routes.
IOM Spain is reporting data on several weeks’ worth of arrivals and rescues in waters of Western Mediterranean and the Atlantic. Ana Dodevska reported that last Thursday (13 July) Spanish authorities rescued 48 people while a boat located 170 miles from Gran Canaria was rescued by a Moroccan sea patrol. IOM Spain said that through Saturday (15 July), the total number of sea rescues on Western routes to Spain stand at 7,389, with 115 fatalities. IOM Libya’s Christine Petré reported Monday that through 14 July, a total of 10,994 migrants have been rescued in Libyan waters while the remains of 348 men, women and children have been discovered along the Libyan shores. She explained that on 3 July, four bodies were retrieved in Tripoli; on 8 July, 65 migrants were rescued off Garabouli. And on 10 July, one male body was retrieved in Al Maya, west of Tripoli. On 13 July, 123 migrants were rescued off Azzawya while later that day, 140 migrants (114 men, 23 women and another three children)

These latest fatalities bring the Mediterranean total to 2,359. Although this figure trails the number of deaths (2,996) recorded by this time last year, it nonetheless marks the fourth consecutive year migrant deaths on the Mediterranean Sea have exceeded 2,350.

Worldwide, the IOM Missing Migrants Project (MMP) reports that there have been 3,256 fatalities in 2017 through 16 July (see chart below) with the Mediterranean region accounting for the largest proportion of deaths – almost three quarters of the global total.

MMP notes that in recent days it added: one body recovered near Mijas, Málaga, Spain; one death in Sinaloa, Mexico; one body found near Carrizo Springs, Texas, USA; and 24 deaths in the Middle East (data from the Syrian Observatory for Human Rights on deaths at the Syria-Turkey border since January 2017).