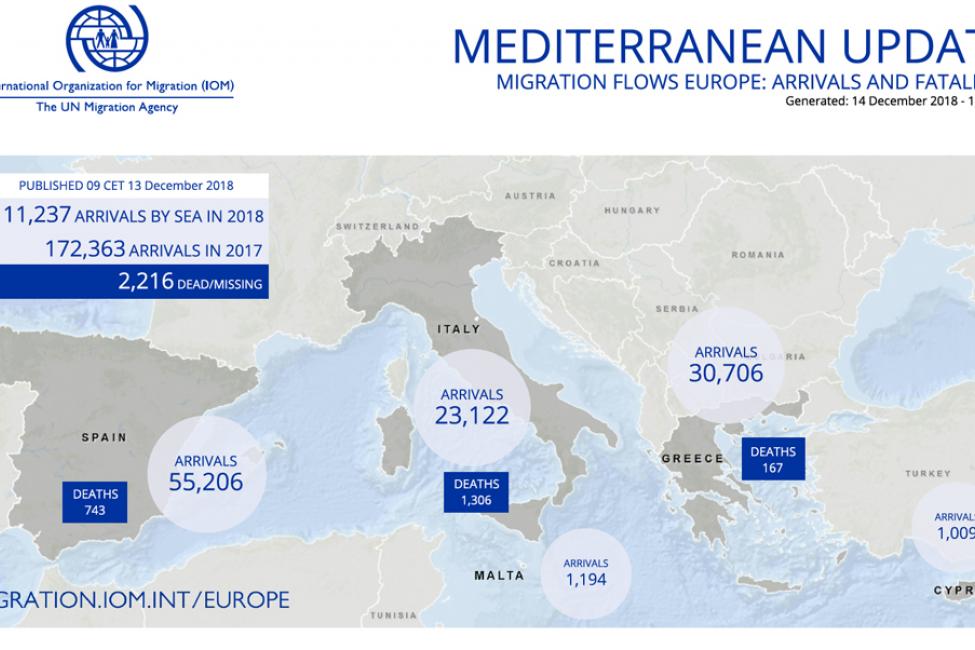 IOM Rome’s Flavio Di Giacomo on Thursday noted that all seaborne irregular arrivals in the Mediterranean region remain lower – by almost 7,000 people – than arrivals last year at this time to Italy alone. Through this date in 2017, Italy recorded 118,019 irregular arrivals of sea-borne migrants and refugees. Arrivals to Italy from North Africa this year are 23.122.

Di Giacomo noted that official Ministry of Interior (Italy) figures for the first 11 months of the year show just two nationalities – Tunisian and Eritrean – counted as many as 2,000 arrivals to Italy via irregular routes from North Africa. He compared those arrivals with the much higher numbers recorded just a year ago, when all close to a dozen sender countries recorded arrivals of at least 5,000 migrants or refugees (see tables 2017, 2018).

IOM Spain’s Ana Dodevska reported Thursday 55,206 irregular migrants have reached Spain’s Mediterranean coasts through 12 December – a rate exceeding 1,000 per week through the year. Already this month more men, women and children have arrived via sea from North Africa than did in any of the year’s first four months (see chart below). Migrant sea arrivals to Spain have exceeded 150 per day since 1 November. For the first third of 2018 Spain’s average was under 40 arrivals per day (See table 5).

IOM’s Missing Migrants Project (MMP) reported Thursday the Mediterranean region continues to account for most deaths recorded globally, with 2,216 migrant deaths and disappearances recorded through 12 December 2018. However, MMP researchers insist any comparison between regions must take note of variations in data quality, and the caveat that data for some regions are highly incomplete.

The Mediterranean itself may not have complete data. For the second time this month IOM’s MMP has learned that a boat disappeared without a trace in the Western Mediterranean after departing from Nador, Morocco, more than a month ago. The shipwreck is believed to have occurred between 26 and 27 October, when at least 54 people – including 11 women and three children – are now thought to have lost their lives. Soon after the boat’s departure, the NGO Alarm Phone, which runs a hotline for people crossing the Mediterranean, received a distress call from those onboard. No one on board has been heard from since.

Spanish and Moroccan authorities confirmed that they, too, conducted search and rescue operations for this vessel but were unable to locate the boat or any survivors. In the weeks since the boat’s disappearance, dozens of family members have posted on social media channels searching for information about their loved ones. For its part the Spanish NGO Caminando Fronteras, which is in contact with families of those on board, also reported that the boat may have disappeared without a trace.

It has now been over a month since the boat went missing. The fate of these 54 people remains a mystery and a source of agony to the many family members left behind. When a boat vanishes without a trace, it often goes unnoticed and unrecorded by the media or databases such as MMP. Access to information on disappearances during migration is difficult in a context in which authorities are largely unreceptive. The search for information often doesn’t move forward in a world in which migrant deaths have become normalized and tolerated as an “assumed risk” of irregular migration. For families, this has a profound impact: the uncertainty of not knowing what has happened to their relatives affects their lives forever. They are left to grapple with this ambiguous loss, between hope and despair, without conclusive evidence on what happened.

Moreover, there are strong indications this year that many others have been lost without a trace in the Western Mediterranean. Earlier this year, the MMP team documented the disappearance of two boats in the Alboran Sea on 30 August and 3 September, in which at least 113 people were lost without a trace. Non-governmental organizations operating in Spain and Morocco have received many additional reports from family members of loved ones lost in shipwrecks which cannot be confirmed. This most recent disappearance gives further evidence to the fact that the 743 deaths recorded in the Western Mediterranean in 2018 – already more than triple the number recorded last year – do not represent the true scale of this humanitarian crisis.

IOM Cyprus’ Dimitrios Tsagalas reported the arrivals this week of three groups of Syrians at the Ledra Palace UN Checkpoint. Twice on 11 December authorities registered groups of eight and six Syrian men. The next day a group of three, two men and one minor child were registered.  These latest arrivals bring to 1009 the number of irregular migrants arriving on the island from elsewhere in the Mediterranean. This is the second consecutive year such arrivals have surpassed 1,000 individuals (See chart below).

Irregular migrants arriving in Cyprus 2014-2018 (Source: Asylum Service of the Republic of Cyprus)

IOM Greece reported Thursday that from Tuesday, 11 December until yesterday afternoon the Hellenic Coast Guard (HCG) was involved in two incidents requiring search and rescue operations off the islands of Lesvos and Samos. The HCG rescued a total of 80 migrants and transferred them to those respective islands.

Those 80 – plus 18 to Rhodes and 214 more to Lesvos and Samos – bring to 30,706 the total number of irregular migrant sea arrivals to Greece through 12 December this year. That surpasses the total (29,501) arriving by sea through all last year (see Table 8.b). Additionally, over 15,000 irregular migrants have arrived this year in Greece by land.

IOM’s Missing Migrants Project (MMP) has recorded 3,456 people who have died or gone missing on migratory routes across the globe in 2018 (See Table 3).

Beyond the Mediterranean, the MMP team also recorded the deaths of three people in a vehicle accident in northern Greece. Nine people were travelling in a van when it crashed on the Egnatia Odos highway, near the city of Keramoti, around 6:30am on 13 December. Besides the deceased, three others were injured. No details regarding the country of origin, age or identities of the deceased have been made available. Since March, MMP has identified 30 migrants who have died on Greek highways after entering the country from Turkey.