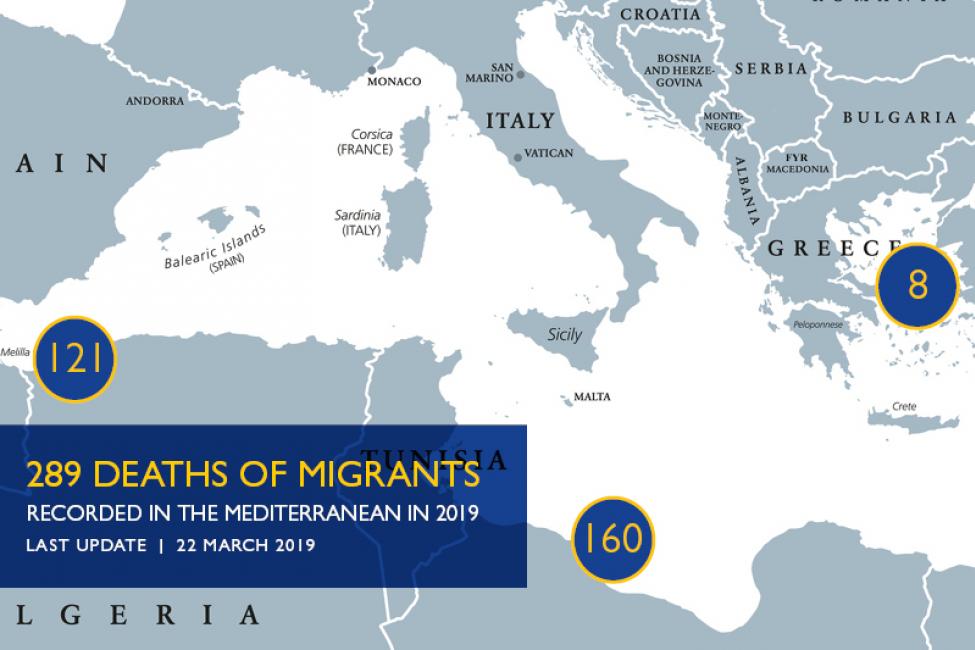 Geneva – The International Organization for Migration (IOM) reports that 11,292 migrants and refugees have entered Europe by sea through 20 March, a 13 per cent decrease from the 13,043 arriving during the same period last year. Deaths on the three main Mediterranean Sea routes through just over 11 weeks of the year are at 289 individuals – or less than 60 per cent of the total (499 deaths) recorded on the Mediterranean during the same period in 2018 (see chart below). IOM Rome’s Flavio Di Giacomo on Thursday reported a total of 398 migrants have arrived by sea to Italy in 2019, according to official Ministry of Interior figures while 930 migrants have been returned to Libya by the Libyan Coast Guard. So far in March just 136 migrants or refugees have arrived in Italy, after just 60 in the month of February. These are some of the lowest monthly totals in six years. By comparison, in 2018 IOM Italy reported 1,049 arrivals in March, 10,853 in March 2017 and 9,676 in March 2016.

IOM Spain’s Ana Dodevska reported that through 20 March, 5,537 men, women and children have arrived as irregular migrants since the start of this year – an average of about 70 per day. Through this period, irregular migrant arrivals by sea to Spain are 49 per cent of all Mediterranean arrivals of this type; moreover, that total through just over 11 weeks of 2019 is almost 900 more arrivals than Spain saw through the end of April 2018, a four-month period during which IOM reported 4,627 irregular migrant arrivals to Spain by sea, or just under 40 per day.

IOM Greece reported on Thursday (21/03) that since Tuesday (19/03), the Hellenic Coast Guard (HCG) knows of at least four incidents requiring search and rescue operation off the islands of Samos and Lesvos. The HCG rescued a total of 244 migrants and transferred them to the respective ports.

Those arrivals join some 475 men, women and children IOM recorded in the three days between 18-20 March arriving at the islands of Lesvos, Samos, Chios and Oinouses, which brought to 5,089 the total number of sea arrivals to Greece this year (see chart below). Irregular arrivals to Greece through 79 days this year are running at a rate of almost 65 arrivals per day, compared with 50 per day through this time in 2018. (see chart) 2019 is the sixth year of IOM’s efforts to systematically record deaths on migration routes worldwide through its Missing Migrants Project (MMP). Since the beginning of 2014, the Project has recorded the deaths of 31,427 people, including 533 in 2019, 289 on the Mediterranean (see chart below). Due to the challenges of collecting information about these people and the contexts of their deaths, the true number of fatalities during migration is likely much higher. Therefore, MMP records should only be viewed as indicative, rather than representative across time or geography.

At least 48 women, men and children drowned in the Western Mediterranean between Morocco and Spain in the past week. On 14 March, a rubber dinghy with 67 passengers sank off the coast of Nador, Morocco. By the time authorities arrived, 44 of those passengers had been lost at sea, including a young girl around 14 years old. Twenty-two people were rescued by the Royal Moroccan Navy, which also recovered the body of one woman.

Four days later (18 March), another boat – this time with 55 passengers – capsized off the coast of Nador.  The bodies of three people who had died during the journey were on board, when a Moroccan Navy vessel arrived. A total of 52 people survived that incident and were brought back to Morocco. Passengers on both boats are reported to all be from Sub-Saharan Africa.

Also, on the Western Mediterranean, a boat with 20 people, reported to be from southern Morocco, capsized off the coast of Mesti in Sidi Ifni, Morocco, on 17 March. There was only one survivor from this incident. Authorities are continuing to search for 19 others who remain missing. The destination of this voyage is believed to have been the Canary Islands, approximately 330 kilometres from the African coast.

On Tuesday, 19 March, another boat sank off the coast of Libya, between Sabratah and Surman. Not much is known about this incident thus far, although 15 people are known to have survived, while six others remain missing at sea. The body of an infant was recovered by Libyan authorities on that boat. The whereabouts of the baby’s family are unknown.

Elsewhere in the world, MMP recorded on Monday, 18 March, the death of an El Salvadoran man, killed while traveling by train near Gómez Palacio, in the state of Durango, Mexico. He was carrying identification indicating he was from the city of Usulután, in south-eastern El Salvador. He was 34 years old.