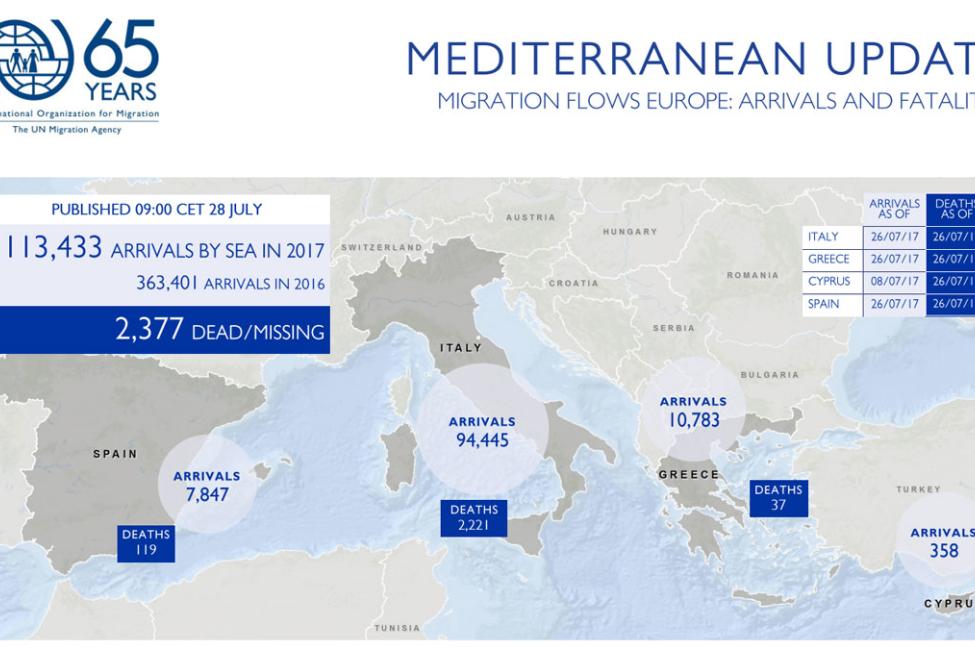 Geneva – IOM, the UN Migration Agency, reports that 113,433 migrants and refugees entered Europe by sea in 2017 through 26 July, with almost 85 per cent arriving in Italy and the remainder divided between Greece, Cyprus and Spain. This compares with 251,172 arrivals across the region through 26 July 2016.

IOM Rome reports 10,424 sea arrivals to Italy this month through 26 July, or about 1,000 new arrivals since IOM’s last report on 23 July. That figure trails the full July totals for each of the past two summers by about 13,000 (see chart below), highlighting a trend that IOM has observed of slower traffic to Italy during mid-summer, and fewer deaths (approximately half of those recorded in July 2015 and 2016.) Nonetheless, for the year to date, arrivals to Italy remain slightly ahead of either 2015 or 2016 totals at 94,445.

IOM Spain’s Ana Dodevska reported Wednesday (26 July) that 50 people were rescued off the Spanish coast and were brought to land at Almeria and Barbate. She said there were two minors among those rescued. These arrivals bring the total number of men, women and children coming by sea to Spain in 2017 to 7,847.

IOM Athens reported Thursday that 264 migrants and refugees arrived at three Greek locations (Samos, Lesvos, Megisti) between 24 and 26 July. The total number of arrivals by sea to Greece as of 26 July is 10,783. This compares with 159,991 at this time last year.

The latest fatality in the region was reported on Wednesday (26 July), when 13 bodies were found in a rubber boat off the coast of Libya by Spanish NGO Proactiva Open Arms – the remains included those of two pregnant women and a mother of four. This brings the total of fatalities in the Mediterranean in 2017 to 2,377. Although this figure trails the number of deaths (3,047) recorded at this time last year, it nonetheless marks the fourth consecutive year migrant deaths in the Mediterranean Sea have exceeded 2,350.

Worldwide, the IOM Missing Migrants Project (MMP) reports that there have been 3,365 fatalities in 2017 through 26 July (see chart below) with the Mediterranean region accounting for the largest proportion of deaths – almost three quarters of the global total.

Among the newly confirmed fatalities from MMP are: six drownings in Rio Bravo (four between Ciudad Juárez and El Paso, one in Reynosa, and one in Piedras Negras); 13 bodies found in a rubber boat off the coast of Libya by Spanish NGO Proactiva Open Arms (including two pregnant women and a mother of four); one train accident in Chiapas; and a  number of bodies found in Brooks County and Webb County, Texas, as well as in Pima County, Arizona. MMP researcher Julia Black noted this week that even though fewer migrants seem to be crossing into the United States in 2017, more people are dying on this route. The US Border Patrol has apprehended 140,024 migrants between January and June 2017, just over half the number (267,746) recorded in the first six months of 2016.

Despite this overall decrease in apprehensions, migrant fatalities recorded in 2017 are higher than in the same period of 2016. MMP has recorded 231 migrant fatalities in 2017, an increase of 18 per cent compared with the 195 recorded between 1 January and 28 July 2016. This past week has been particularly deadly. In addition to the fatalities from migrants suffocating in a truck container in San Antonio, Texas, last weekend, MMP has reported six drownings along stretches of the Río Bravo separating Mexico from Texas. MMP reports there have been 11 drownings just in July – the second month this year (13 drownings in January) to produce drownings in double-digits.

So far this year, 56 people have drowned in the border river, which marks a 51 per cent increase over the 37 recorded between 1 January and 28 July 2016.

Added MMP’s Julia Black: “Migrant deaths in the Río Bravo seem to be on the rise in recent years, with 43 such deaths recorded in 2015, and 63 in 2016. However, in the case of migration over any body of water, it is difficult to determine the true number of migrant fatalities.” As of Thursday night, media reports out of the border metroplex of Ciudad Juarez-El Paso indicate, that in addition to four Guatemalans reported drowned in the river earlier this week, another three migrants have gone missing. Authorities do not know if they have drowned, returned to Mexico or crossed into the US and are continuing north.