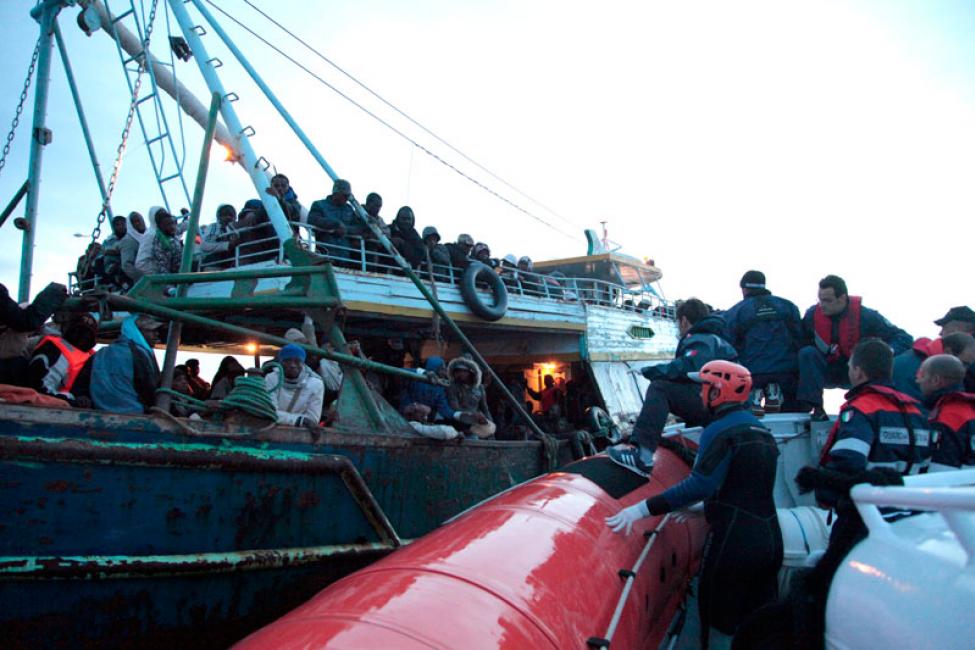 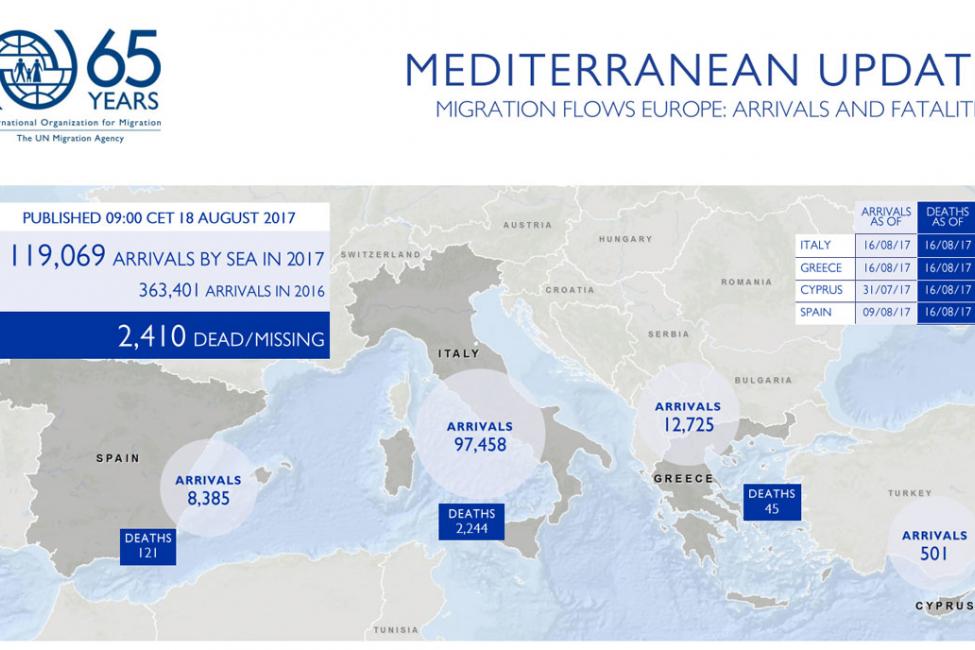 Geneva – IOM, the UN Migration Agency, reports that 119,069 migrants and refugees entered Europe by sea in 2017 through 16 August, with almost 83 per cent arriving in Italy and the remainder divided between Greece, Cyprus and Spain. This compares with 266,423 arrivals across the region through 16 August 2016. IOM Spain reports this week total migrant and refugee sea arrivals had reached 8,385 by 9 August, not counting the 600 or more migrants rescued at sea earlier this week. The official number – 8,385 – is greater than all sea arrivals recorded during 2016, when the full year count totalled 8,162 (see chart below).

Estimated sea arrivals to Spain since 1 June 2017 are approaching 6,000, with over half of those (3,181) just in the month of June. Last year’s busiest month for sea arrivals off Spain was November when 1,855 arrivals were recorded. IOM Libya’s Christine Petré reported today (18/08) that on 16 August, 107 migrants (including six women) were rescued off Al Khums by the Libyan Coast Guard. So far in 2017, 12,945 migrants have been rescued in Libyan waters.

IOM Rome reported Thursday, 17 August, that according to official figures of the Italian Ministry of Interior, 97,458 migrants have arrived by sea to Italy this year, which is a 4.03 per cent drop from the same period in 2016. IOM Rome spokesperson, Flavio Di Giacomo, noted that August arrivals thus far, at 2,245 migrants and refugees, are running at under 10 per cent of 2016 and 2015 August arrivals, despite being past the month’s midway point (see chart below). IOM Athens reported Thursday 458 arrivals in the past seven days (10–16 August), including 334 on Monday, 14 August, arriving on the islands of Lesvos, Chios, Samos and Chilos. On two separate days, 13 August and 16 August, IOM reported no arrivals by sea off Greece. For the year so far, a total of 12,725 migrants and refugees have landed in Greece, compared with 162,015 for the same period last year.

Just 21 deaths have been recorded so far by IOM this August in the region, a sharp drop from the 689 recorded in August 2015 and 62 last year. The latest count for Mediterranean Sea fatalities is 2,410. That figure lags by almost 800 behind the number of deaths (3,208) recorded at this time last year. Nonetheless, 2017 marks the fourth consecutive year migrant deaths in the Mediterranean Sea have exceeded 2,400.

Worldwide, the IOM Missing Migrants Project (MMP) reports that there have been 3,493 fatalities in 2017 through 16 August (see chart below). The Mediterranean region continues to account for well over half of all fatalities worldwide.

Among the new deaths reported by the MMP team since Tuesday are two bodies recovered in Az Zawiyah, Libya, two deaths on the US/Mexico border (1 drowning in Rio Bravo and 1 body recovered in Brooks County, Texas) and three deaths on the Syrian/Turkish border.

In this last location, MMP has reported a total of 41 fatalities since 1 June, comprising seven in August, 17 in July and 17 in June. The Syrian Observatory for Human Rights, a group that monitors deaths at the Turkish/Syrian border, reported these numbers but has collected few details. MMP has confirmed that at least ten of the victims were men, as well as one adult and three minors. The rest is unknown. Most of the incidents took place in Idlib province with the cause of death recorded as gunshot wounds.