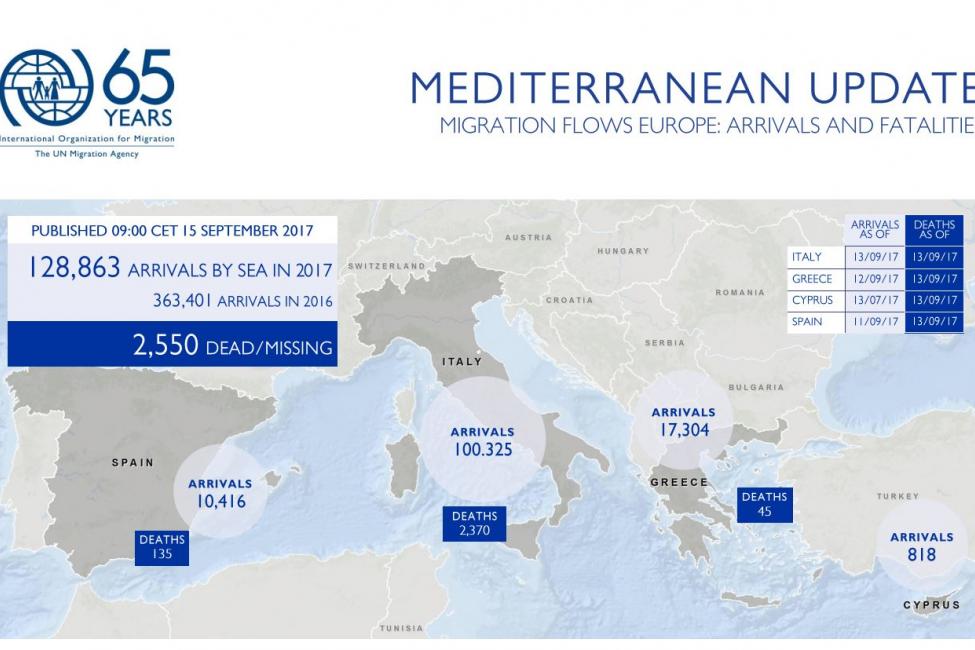 Geneva – IOM, the UN Migration Agency, reports that 128,863 migrants and refugees entered Europe by sea in 2017 through 13 September, with over 75 per cent arriving in Italy and the remainder divided between Greece, Cyprus and Spain. This compares with 298,663 arrivals across the region through 13 September 2016.

IOM Rome reported on Thursday, 14 September that, according to official figures of the Italian Ministry of Interior, 100,325 migrants have arrived by sea to Italy this year, which is about 23 per cent less than arrivals by this same time last year (see chart below). IOM Rome has also reported on the composition of nationalities seeking to enter Italy via sea through August (see chart below). Nigeria continues to be the largest sender nation, although at a rate well below last year’s traffic, while Guinea has edged slightly ahead of Bangladesh in the second spot. IOM Athens’ Kelly Namia on Thursday (14 September) said that according to the Hellenic Coast Guard, there were at least four incidents off the islands of Lesvos, Samos and Chios this week that required search and rescue operations. The Hellenic Coast Guard managed to rescue 273 migrants and transferred them to the respective islands.

Namia further reported that migrant arrivals to the Greek islands total 2,234 for the first 12 days of September, making this month 2017’s busiest on the Eastern Mediterranean Sea route. After rather low arrival rates through July this year, in the 44 days since 1 August, some 5,900 migrants have entered Greece from Turkish waters, compared with 11,404 during the previous seven months combined. Thus far a total of 17,304 migrants this year have entered Greece by sea, which remains only about 10 per cent of last year’s total arrivals and just 2 per cent of 2015’s surge. (See chart below.)

IOM’s Namia adds that over the last three days for which IOM has data (10-12 September) 698 migrants arrived, mainly to the islands of Chios, Lesvos, Samos, Kos and Megisti.

IOM’s Dimitrios Tsagalas of the IOM Cyprus office also reported this week on the 305 migrants who arrived via two vessels on Saturday (9 September) on the island’s western coast, after leaving from the Turkish town of Mersin.

One boat, with 134 passengers on board landed near Latchi, and included 88 men, 9 women and 37 children, all from Syria. A second vessel with 171 on board, arrived near Pyrgos Tyllirias with 117 men, 17 women and 37 minors, also from Syria.

The migrants said they paid up to USD 2,000 (EUR 1,600) each for the crossing.  Police said that it was the largest number of migrants to reach Cyprus in a single day. A total of 818 migrants have landed in Cyprus so far in 2017. Through 9 September last year the migrant total was 345.

Finally, IOM continues to monitor events of migrant arrivals to Europe via the Black Sea.

From Bucharest, IOM Romania’s Head of Office Mircea Mocanu reported this week that a recent uptick in arrivals to Romania via the Black Sea crossing indicates smugglers may be exploring alternative routes to Europe from the east.

IOM’s Mocanu cautioned that numbers on these crossings remain quite low, especially compared with busier Central and Eastern Mediterranean routes. IOM Romania, which relies on Romania’s Ministry of the Interior and Coast Guard for data, reported that in 2013 there were no irregular crossings through the Black Sea into Romania, while in 2014 authorities recorded the crossing of just 430 migrants. That figure dropped to 68 in 2015 and then just a single recorded crossing in 2016.

This year there have been 482 migrants recorded in five separate arrivals via fishing boats, including the group of 157 migrants (Iraqis and Iranians; 56 children and 101 adults) which arrived early Wednesday morning (13 September). Historically, migrants crossing Romania enter Hungary as they continue their journeys into Central Europe.

Worldwide, the IOM Missing Migrants Project (MMP) recorded several fatalities in the Mediterranean last week: one body was recovered near Al Khums, Libya, on 11 September, and at least seven migrants died or disappeared in the Western Mediterranean in two separate incidents. One boat capsized yesterday night off the coast of Almería, Spain: three migrants were rescued and one body was recovered. Search and rescue operations are still underway, and there may be more missing.

These deaths bring the total of fatalities in the Mediterranean in 2017 to 2,550, which is 1,012 fewer than the total number of fatalities through the same period last year.

Elsewhere in the world, MMP has recorded an additional 1,218 migrant fatalities in 2017 through 13 September, bringing the 2017 total through 13 September to 3,768 men, women and children. That compares with 5,109 through the same period last year (see chart below). Since last week, MMP recorded 12 more deaths in Southeast Asia, after two boats carrying women and children fleeing Myanmar capsized in the Naf River in recent days. Ten bodies were recovered between Shah Pori Dwip and Jaliapara on 13 September, and two bodies were found near Teknaf on 14 September. Nearly three weeks into a mass exodus of people fleeing violence in Myanmar’s Rakhine State, dozens have drowned while attempting to escape to Bangladesh by boat: IOM’s Missing Migrants Project has recorded 69 deaths in this region since 31 August.

Additionally, MMP recorded two deaths in the Americas: one migrant was hit by a train in Sinaloa, Mexico, and the remains of another migrant were found in a ranch in Hidalgo County, Texas.