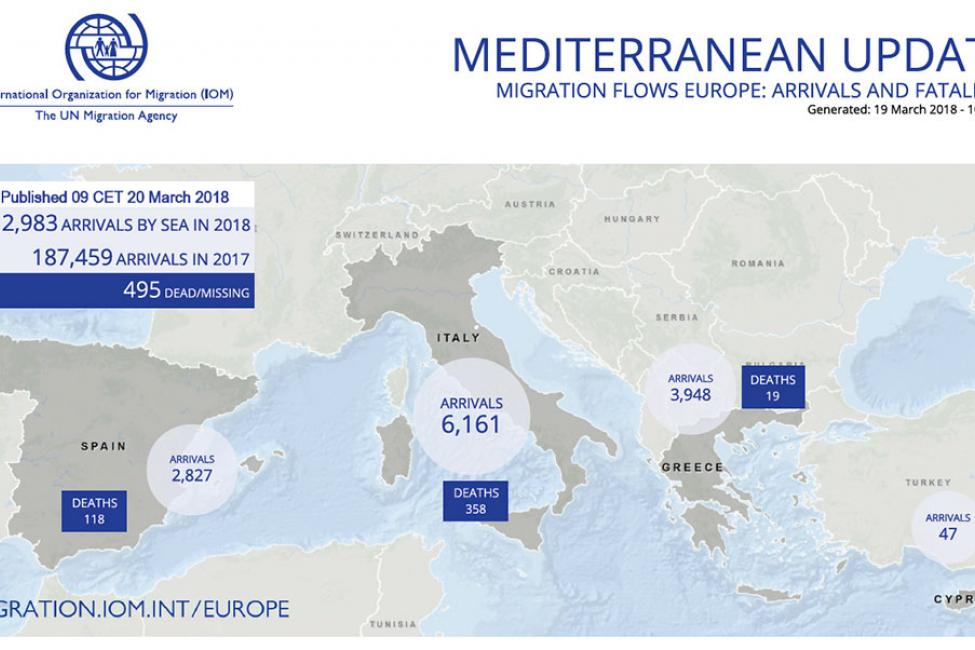 IOM Athens’ Kelly Namia reported Monday that on Saturday a boat capsized off the island of Agathonisi from which three people were rescued while 16 bodies were retrieved by the Hellenic Coast Guard. Authorities believe at least three people remain missing. Of the 16 bodies, nine were children.
Three survivors (two women and one man) managed to reach the shore. According to the Hellenic Coast Guard eight victims were from Afghanistan, six from Iraq and two have not been unidentified. Of the children, five were from Afghanistan and four were from Iraq.
IOM’s Missing Migrants Project (MMP) reported that this is the first incident recorded on the eastern Mediterranean route since 25 December 2017 – a stretch of 85 days without a fatality on this route, which in 2015 saw 850 fatalities for the year.
This is not the longest gap between fatalities, MMP’s Julia Black explained. Between the dates of 24 April and 27 July last year – some 101 days – IOM recorded no fatalities along this route. These long periods between fatalities mean that the period between 20 March 2017 through 20 March 2018 has resulted in a remarkably death-free route in the waters separating Greece from Turkey.
During the last 365 days, 79 men, women and children have died on the Eastern Mediterranean route, or less than a third the total, 285, of those lost on the Western Mediterranean route between North Africa and Spain, which had slightly fewer arrivals during that time, but was much more lethal.
By comparison, during the past 365 days, a total of 2,700 migrants have been lost on the busy Central Mediterranean route between North Africa and Italy – the route with the most arrivals. Nonetheless, MMP reports that deaths on the Eastern Mediterranean route occur at an estimated rate of one death for every 623 arrivals. That compares with one death for every 45 arrivals on the Central Mediterranean route and one for every 92 arrivals on the Western Mediterranean route.
Over the four days (14-17 March), the Hellenic Coast Guard reported three additional incidents requiring search and rescue operations off the island of Kos and Lesvos. The Coast Guard rescued 140 migrants and transferred them to those islands. Those rescued, plus another 240 migrants arriving in Rhodes and Samos bring the total number of sea arrivals to Greek territory through 13 March to 3,948 (see chart below) – an average for the year of just over 50 persons per day. Almost 70 per day have arrived in the month of March.

IOM Rome’s Flavio Di Giacomo said Monday that the ship Proactiva (operated by NGO Open Arms), arrived in Pozzallo on Saturday with 216 migrants on board. Since then the vessel has been sequestered in Sicily, on prosecutors' orders.
Di Giacomo explained that the NGO has reported that a Libyan Coast Guard vessel threatened to shoot its rescue dinghies if they didn't offload the migrants rescued in international waters. The NGO refused to comply with that order. According to media reports the ship has apparently been seized because the crew members are accused of criminal association in illegal immigration. "I guess they've instituted the crime of solidarity," a lawyer representing the ship's commander said.
Statistics from Italy’s Ministry of Interior indicate that migrant flows from North Africa as winter ends this year continue to lag well behind levels recorded in each of the previous two years. So far this month fewer than 1,000 men, women and children have landed as irregular sea migrants, or less than a third of 2017’s arrivals and less than one-fifth of 2016’s.
(see chart below).

IOM Spain’s Ana Dodevska reported Monday that total arrivals by sea in 2018 have reached 2,827 men, women and children who have been rescued in Western Mediterranean waters through 18 March. That compares with 2,426 through all of March 2017. IOM has recorded 118 drowning deaths on this route in 2018, a rate of just over 10 per week. During all of last year, IOM reported 223 deaths of irregular migrants on the Western Mediterranean, or just over four per week.

IOM Libya’s Maysa Khalil on Monday reported that the rescues/interceptions by the Libyan Coast Guard since the beginning of 2017 now stand at 24,189, with 3,399 in the first 11 weeks of 2018 (see chart below). IOM’s Missing Migrants Project (MMP) reported Monday that deaths on the three Mediterranean routes – 495 as of March 18 – remain down about 9 per cent below their total at this same time in 2017, when 544 migrants had been counted as drowned or missing in the waters between Africa, the Middle East and Italy.
The 495 deaths on the three Mediterranean routes include, this week, 12 migrants who died in the Alborán Sea between Morocco and Spain, as reported by Spanish NGO Caminando Fronteras. The Moroccan Navy also rescued 22 people in the same operation on 12 March while recovering those 12 bodies from a sinking boat. MMP also reported that on 28 February, the Algerian Coast Guard recovered the remains of man five nautical miles northeast of Plage de Bouzedjar. This was the eighth body recovered in this area in February alone.
Worldwide, IOM’s Missing Migrants Project has recorded 779 migrant fatalities in 2018, compared with 1,100 through 18 March last year (see chart below).
Besides these latest Mediterranean drownings, MMP reported that two migrants died and seven were injured in a car accident in Greece’s northern city of Xanthi on 17 March. MMP also reported that in Southeast Asia, one man was killed by a landmine blast on the Myanmar-Bangladesh border on 15 March, while his wife and four children were injured.
On 19 March, the bodies of two Vietnamese migrants were recovered from a beach in Taiwan’s eastern coast, while five survivors were rescued by Taiwan’s Coast Guard. One of them reportedly died when receiving medical treatment.
The MMP team also recorded one death between West Africa and Spain: on 16 March, the remains of a migrant were found near Playa de la Madera, in Lanzarote, Canary Islands. MMP data are compiled by IOM staff but come from a variety of sources, some of which are unofficial. To learn more about how data on missing migrants are collected, click here.
For latest arrivals and fatalities in the Mediterranean, please visit: http://migration.iom.int/europe
Learn more about the Missing Migrants Project at: http://missingmigrants.iom.int