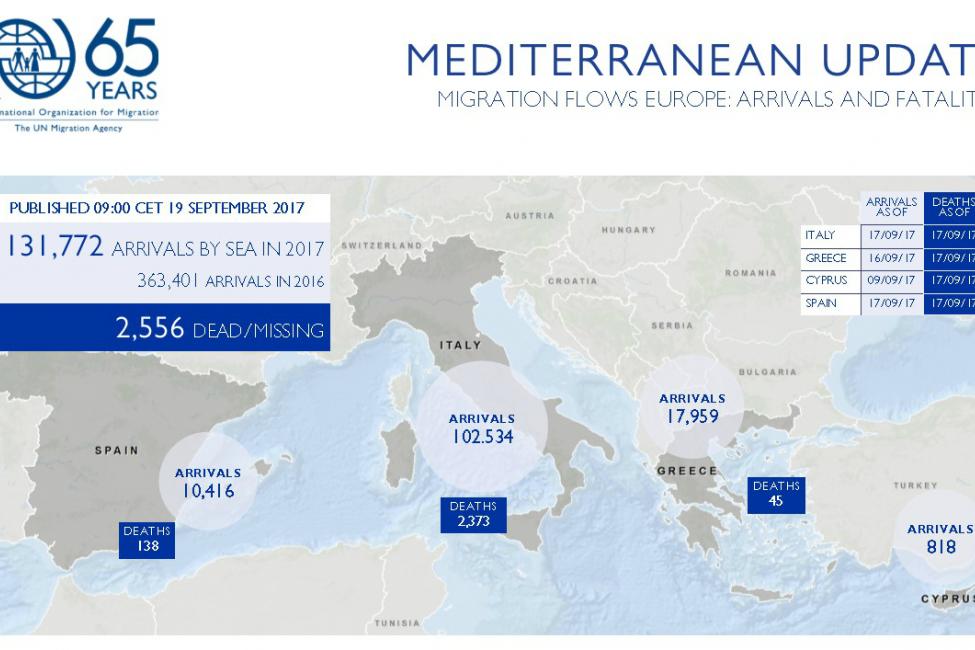 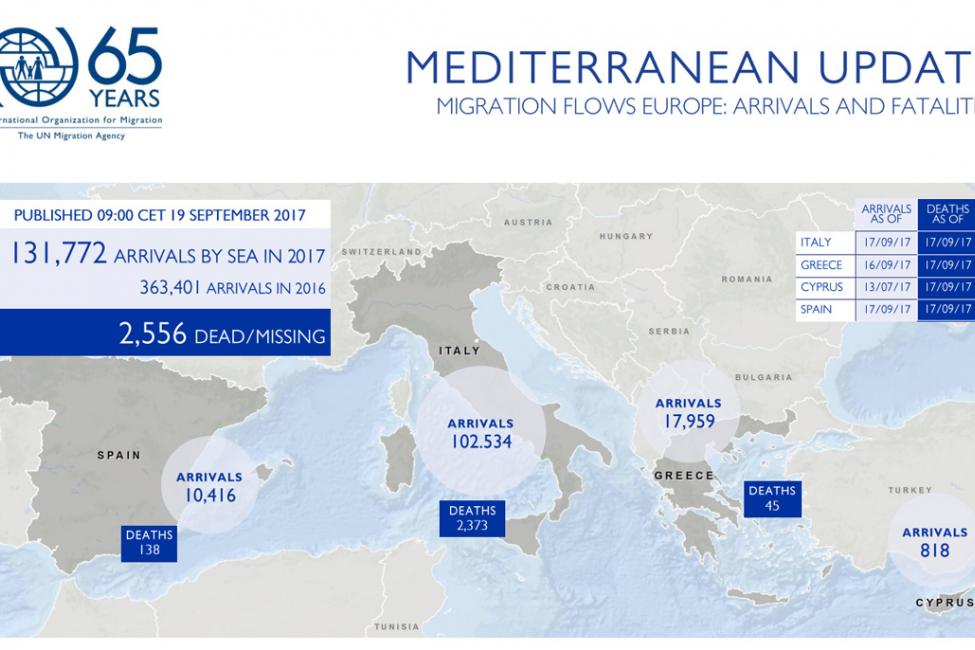 Geneva – IOM, the UN Migration Agency, reports that 131,772 migrants and refugees entered Europe by sea in 2017 through 17 September, with over 75 per cent arriving in Italy and the remainder divided between Greece, Cyprus and Spain. This compares with 300,076 arrivals across the region through 17 September 2016. IOM Rome reported on Monday, 18 September that, according to official figures from the Italian Ministry of Interior, 3,407 migrants have arrived by sea to Italy this month through 17 days, which nearly matches the 3,914 that arrived through 31 days of August (see chart below) and represents an increase of almost 2,000 arrivals just in the past week.

Early on Saturday morning, 16 September, around 1,074 migrants on one wooden and five rubber boats were rescued at sea off Azzawiyah. Among the rescued migrants were 17 children. The rescued migrants, the majority of them from Nigeria, Senegal and Ghana were transferred to Shuhada al Nasr detention centre where they received health assistance from IOM. Since many migrants suffered from scabies, IOM is planning an anti-scabies operation at the detention centre. IOM will also distribute non-food aid and provide psychosocial support. The following day, on Sunday, 17 September, around 1,000 more migrants were rescued at sea off Subratah.

The total number of migrants rescued so far this year in Libyan waters, is 16,437.

IOM Athens’ Kelly Namia on Monday (18 September) said that according to the Hellenic Coast Guard, there were at least five incidents off the islands of Lesvos, Samos, Anafi and Chios this past weekend that required search and rescue operations. The Hellenic Coast Guard managed to rescue 222 migrants and transferred them to the respective islands.

Namia further reported that migrant arrivals to the Greek islands totalled 2,889 for the first 16 days of September, making this month 2017’s busiest on the Eastern Mediterranean Sea route. After rather low arrival rates through July this year, in the 47 days since 1 August, some 6,554 have entered Greece from Turkish waters – an average of 140 daily – compared with 11,404 during the previous seven months combined. Over the last four reporting days (13-16 September), arrivals have averaged 164 men, women and children daily.

So far, a total of 17,959 migrants this year have entered Greece by sea, which equals only about 10 per cent of last year’s total arrivals and just 2 per cent of 2015’s surge (See chart below).

IOM’s Missing Migrants Project (MMP) recorded several fatalities in the Mediterranean since last week: three bodies were found in a dinghy during a rescue operation 44 kilometres northwest of Tripoli, Libya, on 15 September; and six Algerian migrants are still missing after their boat capsized off the coast of Almería on 13 September.

These deaths and disappearances bring the total of fatalities in the Mediterranean in 2017 to 2,556, which is 712 fewer than at this same time last year.

Elsewhere MMP corded an additional 1,225 migrant fatalities in 2017 as of 18 September. MMP recorded one more death in Southeast Asia, after one boat carrying women and children fleeing Myanmar capsized in Naf River on 14 September. One five-week-old baby tragically died. The bodies of three more children washed up on the bank of Naf River last week. Nearly three weeks into a mass exodus of people fleeing violence in Myanmar’s Rakhine State, dozens have died while fleeing to Bangladesh: IOM’s Missing Migrants Project has recorded 76 deaths since August 31.

Additionally, MMP recorded three deaths in the Americas: one migrant drowned in the Río Bravo, in Piedras Negras, Mexico, and two migrants died in a vehicle accident near the San Ysidro border crossing point between Tijuana and San Diego.