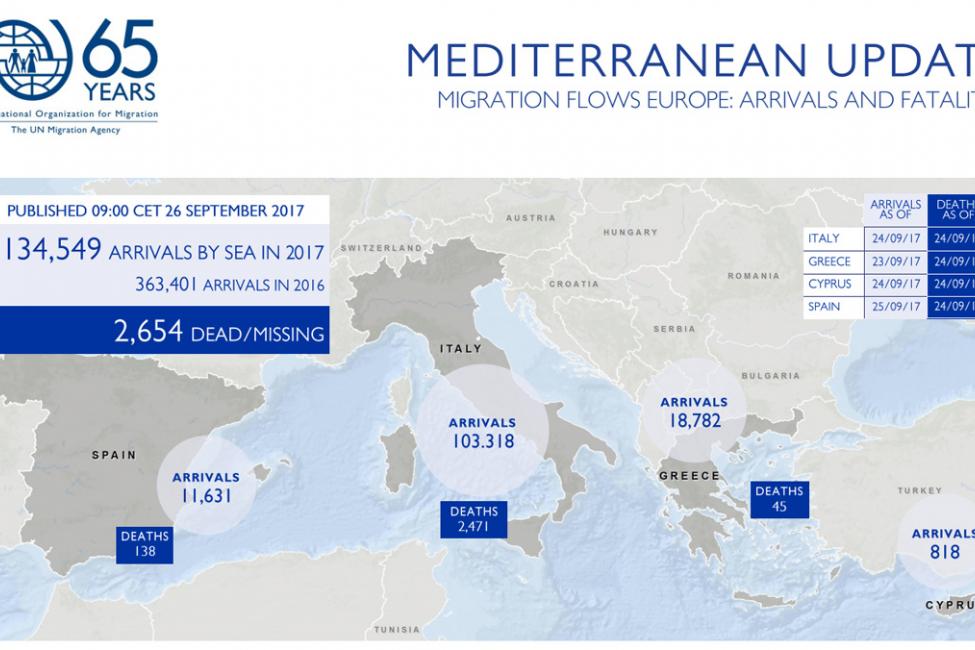 Geneva – IOM, the UN Migration Agency, reports that 134,549 migrants and refugees entered Europe by sea in 2017 through 24 September, with over 75 per cent arriving in Italy and the remainder divided between Greece, Cyprus and Spain. This compares with 302,175 arrivals across the region through the same period last year. IOM Rome’s Flavio di Giacomo reported on Thursday, 21 September that, according to official figures of the Italian Ministry of Interior, 103,318 migrants arrived by sea to Italy this year, or some 21.5 per cent fewer than last year in the same period.

Di Giacomo reported a shipwreck that occurred off the Libyan coast last week – with at least 90 missing migrants – has been confirmed.

IOM Athens’ Kelly Namia on Monday (25 September) reported that according to the Hellenic Coast Guard, there were at least three incidents off the islands of Lesvos and Samos over the past weekend that required search and rescue operations. The Hellenic Coast Guard managed to rescue 20 migrants and transferred them to the respective islands.

Namia further reported that migrant arrivals to the Greek islands total 3,712 for the first 23 days of September, making this month 2017’s busiest on the Eastern Mediterranean Sea route. (See chart below.) Thus far a total of 18,782 migrants this year have entered Greece by sea, which remains only about 10 per cent of last year’s total arrivals and just 2 per cent of 2015’s surge.

Worldwide, IOM’s Missing Migrants Project (MMP) has recorded 4,147 migrant fatalities in 2017 as of 24 September. Since last week, MMP recorded three deaths in the Americas: two migrants drowned while crossing the Río Bravo on the US/Mexico border; one Mexican national died in a hospital in Eagle Pass, Texas, after he was found in a ranch with signs of dehydration. Two Honduran migrants died in a train accident in Querétaro, Mexico. In North Africa, two Burkinabe migrants died in the sewage system underneath the border fence between Melilla, Spain, and Beni Enzar, Morocco.

Additionally, MMP recorded 38 fatalities in the Black Sea in a shipwreck off the coast of Kocaeli, Turkey, on 22 September. Twenty-four migrants lost their lives and a rescue operation is underway to search for the 14 migrants that remain missing. In the Central Mediterranean, 7 migrants died and 90 are missing after a boat capsized on 20 September off the coast of Zuwara, Libya. These deaths and disappearances bring the total of fatalities in the Mediterranean in 2017 to 2,654.