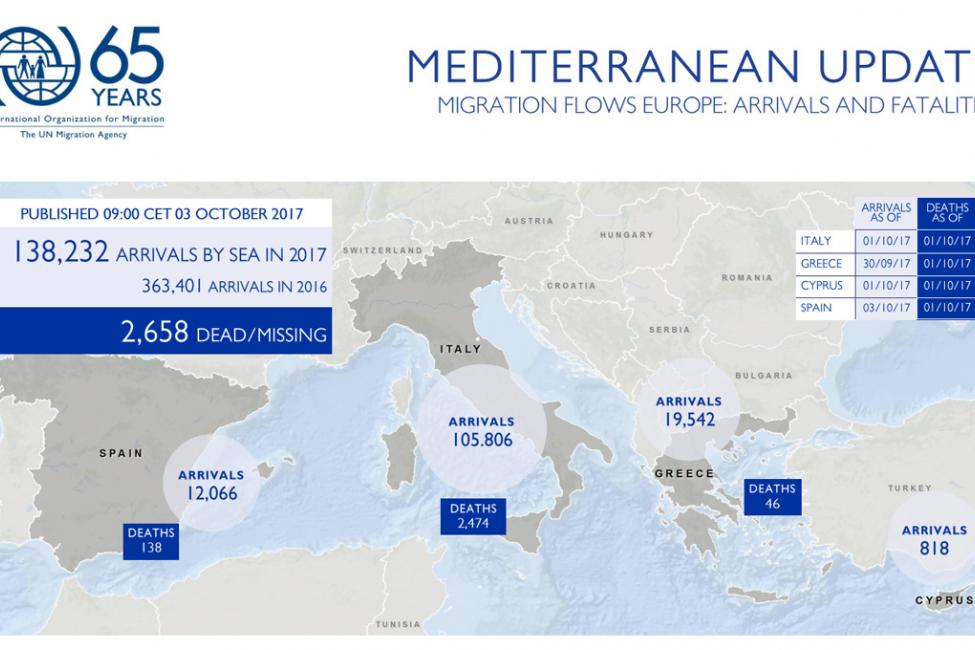 Geneva – IOM, the UN Migration Agency, reports that 138,232 migrants and refugees entered Europe by sea in 2017 through 1 October, with over 75 per cent arriving in Italy and the remainder divided between Greece, Cyprus and Spain. This compares with 304,933 arrivals across the region through the same period last year. IOM Rome reported on Monday (2 October) 1,002 migrants were rescued over the weekend by Italian and international ships and are in the process of being brought to Italy (those totals are not included in table above). Italy’s arrival totals for the summer months of July, August and September this year totalled 10,198 – a significant drop (see chart below) from similar three-month periods totals recorded by IOM in 2016 (61,821) and 2015 (61,742).

IOM Rome’s Flavio di Giacomo noted that today (3 October) marks the fourth anniversary of the tragedy in 2013 when 368 migrants lost their lives in a shipwreck, in proximity of Lampedusa, while crossing the Mediterranean Sea. On this occasion, IOM joins other international and national organizations, national authorities and the civil society, in marking a day of remembrance with a reception in Lampedusa.

Among the activities, IOM has organised, together with other organizations, training sessions for 200 high school students gathering in Lampedusa from all over Italy and Europe, with the aim of raising awareness on issues related to migration, human rights, reception of migrants and refugees. In particular, IOM will focus its session on migration and victims of trafficking. IOM will also take part in the official ceremony to remember the thousands of persons who lost their lives, drowning in the Mediterranean Sea.

IOM Athens’ Kelly Namia on Monday reported 347 migrants and refugees entered Greece via the Mediterranean during the last four days of September, bringing the total for the month to 4,472. That makes September 2017’s busiest on the Eastern Mediterranean Sea route. (See chart below). IOM Libya’s Christine Petré reported that on Saturday (30 September), one wooden and one rubber boat with 226 migrants (including 20 women and 4 children) were rescued/intercepted. The majority of those brought back to shore are natives of Morocco, Cameroon and Senegal. Witnesses said the boats left Subratah.

No fatalities were reported in regard to either incident on Saturday; however, IOM’s Missing Migrants Project (MMP) on Monday recorded the deaths of three migrants off the coast of Libya. The remains of those victims were recovered from two separate rubber boats during rescue operations on Sunday.

Those deaths bring to 2,658 the total of migrants lost on the Mediterranean so far in 2017 – compared to 3,602 during the same period last year.

Worldwide, IOM’s Missing Migrants Project (see chart below) has recorded the deaths of 4,425 migrants in 2017.  Since last week, the deaths of three migrants in Central America have been recorded.  Two young men were hit by trains in Mexico – one in Tlaxcala, on 7 June of this year, and the other on 1 September in San Luis Potosi.  On 29 September, a Cameroonian man was killed in cross-fire between Nicaraguan border officials and smugglers on the border with Costa Rica.