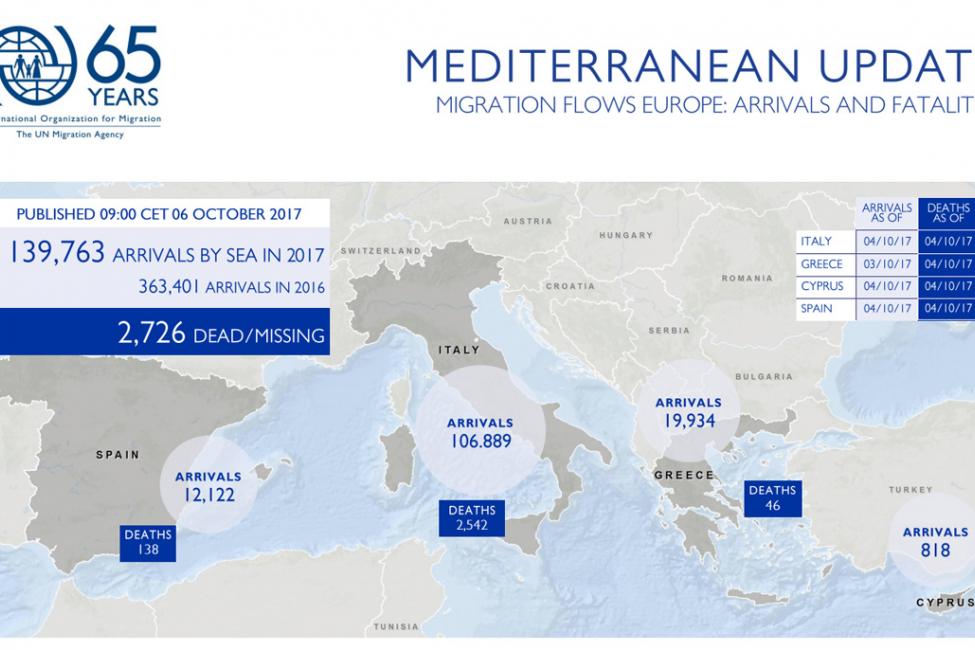 Geneva – IOM, the UN Migration Agency, reports that 139,763 migrants and refugees entered Europe by sea in 2017 through 4 October, with over 75 per cent arriving in Italy and the remainder divided between Greece, Cyprus and Spain. This compares with 312,153 arrivals across the region through the same period last year. IOM Rome reported on Thursday (5 October) that official figures from the Italian Ministry of the Interior show 106,889 migrants arriving by sea this year:  23.26 per cent less than last year in the same period. IOM Rome noted as well that several of the 1,002 migrants rescued over the weekend by Italian and international ships, and registered for arrival at the port of Catania, provided testimony that confirmed the deaths of three fellow migrants at sea over this same period.

IOM Athens’ Kelly Namia on Thursday reported on three search and rescue operations occurring off the coasts of Lesvos and Farmakonisi during the first three days of October that resulted in the rescue of 228 migrants who were safely landed on the two islands.

Namia further reported that migrant sea arrivals to Greek territory totalled 392 for the first three days of October, and 19,934 for the year so far. (See chart below.)

IOM Libya’s Christine Petré reported that on Tuesday (3 October) a single rubber boat carrying 52 migrants (46 men and six women) were rescued/intercepted at sea near the Libyan capital of Tripoli. Their embarkation point was reported as Al Maya. According to testimony from these survivors, some 68 migrants on that voyage remain missing.

With these rescued in this latest incident, IOM’s Petré said that the total of those rescued/intercepted to date in Libyan waters now is 18,405 men, women and children.

The missing 68 bring to 2,726 the number of migrants believed missing or drowned on the Mediterranean Sea this year on all routes through October 3, 2017. That figure was 3,682 during the same period in 2016, nearly 1,000 more deaths through nine months than this year’s total.

Worldwide, IOM’s Missing Migrants Project (MMP) has recorded 4,526 migrant victims in 2017, compared with 5,670 at this point last year. In addition to fatalities in the Mediterranean, MMP recorded the deaths of three migrants in the Indian Ocean: two children and one woman who died on a journey to the French island of Mayotte from Comoros Islands after their boat capsized on 1 October. In Mexico, the remains of one young man were found near the train tracks in Saltillo, Coahuila, on 4 October. On 19 September, 23 Afghan migrants were shot in Fars province, Iran, in the minivan where they were being transported after entering the country irregularly.

MMP also received data from Pima County, Arizona, for the month of September: the remains of nine migrants who lost their lives crossing the US/Mexico border were recovered at different locations.