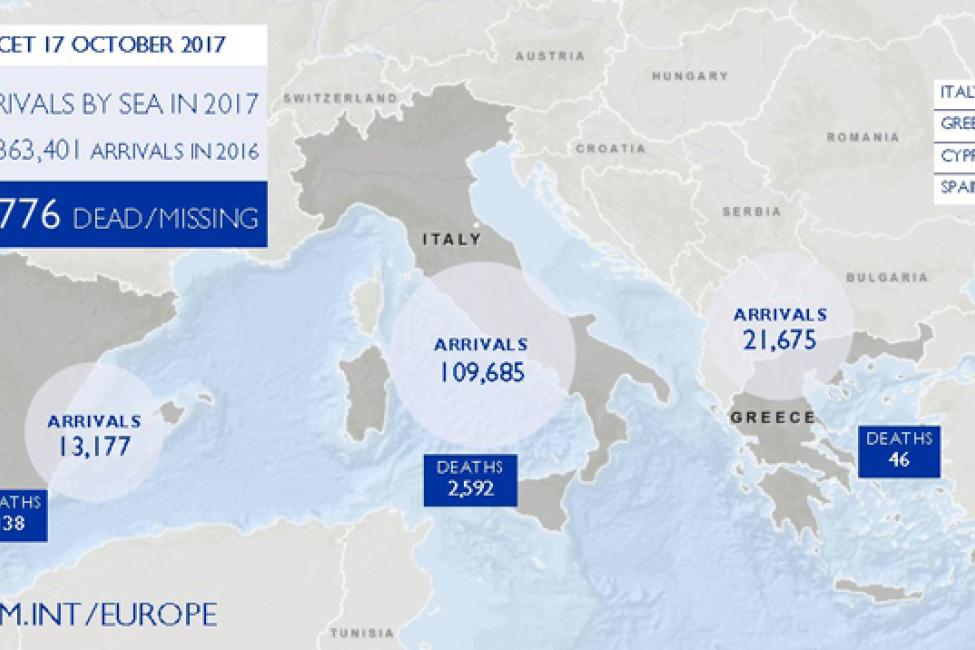 Geneva – IOM, the UN Migration Agency, reports that 145,355 migrants and refugees entered Europe by sea in 2017 through 15 October, with over 75 per cent arriving in Italy and the remainder divided between Greece, Cyprus and Spain. This compares with 319,594 arrivals across the region through the same period last year.

IOM Rome reported Thursday (12/10) that official figures from the Italian Ministry of the Interior show 109,685 migrants and refugees have arrived in Italy by sea this year, not including 284 migrants rescued and brought to shore since Sunday. Just around 4,300 arrivals were recorded by Italy this past August, and 6,288 in September – both totals considerably lower than those recorded during IOM Athens’ Kelly Namia reported Monday on three events occurring since last Wednesday (11 October) off the islands of Lesvos, Samos, and Kos that required search and rescue operations. The Hellenic Coast Guard managed to rescue 171 migrants and transfer them to the respective islands.

Namia further reported that migrant sea arrivals to Greek territory totalled 2,133 for the first 14 days of October, and 21,675 for the year so far. (See chart below.)

IOM Libya’s Christine Petré reports that so far this year, 18,477 migrants have been rescued/intercepted in Libyan waters.

Worldwide, IOM’s Missing Migrants Project (MMP) has recorded the deaths of 4,668 people migrating in 2017.  Since last week, there was one death near Beitbridge, Zimbabwe, where a man died trying to cross the border into South Africa and was fatally attacked by a hippopotamus.

Several boat accidents involving migrants have also been recorded. In the Caribbean, 40 Haitians went missing at sea north of the island La Tortue on Sunday (October 15).  They were thought to be en route to the Turks and Caicos Islands. Seven are reported to have survived the incident.

In Southeast Asia, 10 women (four women and six children) were reported to have drowned in the Naf River on Monday, 16 October, as they tried to cross from Rakhine State, in Myanmar to Bangladesh.  The number of missing from this incident is still unconfirmed. Since 31 August of this year, 182 Rohingya have died trying to cross into Bangladesh.

Off the coast of Tunisia, 20 more bodies have been recovered from the incident that occurred on 8 October.  The number recovered is now 28, with 20 still missing.  All of the dead from this incident were reported to be Tunisian. In another incident, this past Sunday (15 October), 23 people were rescued and one body was recovered off the coast of Sfax, Tunisia.

This latest case brings the total number of fatalities recorded in the Mediterranean in 2017 to 2,776, almost 1,000 fewer than the 3,709 recorded during this time last year.

*When deaths occur at sea, Missing Migrants Project often relies on the estimates of survivors once they are rescued, with the lowest estimate of missing persons always used in the dataset.