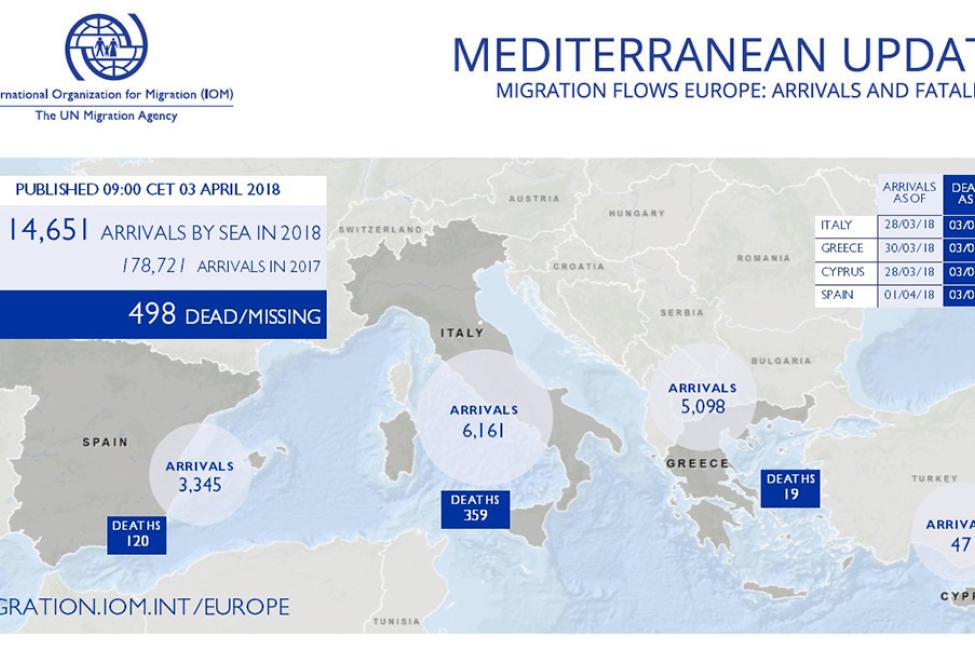 Geneva – IOM, the UN Migration Agency, reports that 14,651 migrants and refugees have entered Europe by sea through the first 91 days of 2018, with about 42 per cent arriving in Italy and the remainder divided between Greece (35%) Spain (23%) and Cyprus (less than 1%).

IOM Athens’ Kelly Namia reported Monday that over the four days (27-30 March), the Hellenic Coast Guard informed IOM of at least five incident requiring search and rescue operations off the island of Lesvos. The Coast Guard rescued 175 migrants and transferred them to that island.

An additional 585 irregular migrants landed at the islands of Samos, Chios, Rhodes, Kos—as well as several landings at Lesvos that did not require rescue—to bring the total for irregular arrivals to Greece through 30 March to 5,098 (see chart below), a figure some 40% higher than at this same time last year.

IOM Spain’s Ana Dodevska reported Monday that total arrivals by sea in 2018 have reached 3,345 men, women and children who have been rescued in Western Mediterranean waters through 1 April. That compares with 2,426 through all of March 2017.

Worldwide, IOM’s Missing Migrants Project has recorded 800 deaths and disappearances during migration in 2018, compared with 1,374 at this time last year. Part of the difference is statistical: MMP has complete data, for example, for all of March 2017's missing migrants identified in the U.S.-Mexico boirder reguion, but will not have complete data for last month for several more days. Similarly, MMP does not have complete data for North Africa, where an estimated 217 people died through this date last year(see chart below).

Today's data do not include the deaths of six refugees killed in Tanzania in a traffic accident while being transported back to their homes in Burundi in an eight-bus convoy operated by IOM. Nor do today's data include the reports of migrants missing in Greece's Evros River, where reports have yet to be confirmed.

Most recently, six migrants died in Central America when making their way north to the border with the U.S. On 26 March, a boat carrying 10 migrants from the Colombian town of Capurganá to Panama capsized off Puerto Obaldía, in Guna Yala, northeast Panama. Five survivors and the remains of a man and an infant girl were recovered by the Panama border police, while three migrants remain missing. In Mexico, the body of a young man was retrieved near train tracks in Las Julietas de Torréon, Coahuila on 26 March.

There were three other additions to the Missing Migrants Project database since last week’s update. On the US-Mexico border, where 56 migrant deaths have been recorded this year, a 40-year-old Mexican woman was found dead in Mexicali, Baja California on 24 March.

In Italy, a Nigerian woman died 24 March after being rejected at the border with France. In addition, a 16-year-old Eritrean migrant died Wednesday at a hospital in Lille, France, from injuries he sustained after jumping from a truck near Port of Calais last Friday, 23 March.

On the Greece-Turkey border, a rescue operation was launched on Wednesday to locate migrants who were reported missing at the Evros river in north-eastern Greece, where water levels were very high due to heavy rainfall over the past few days. For latest arrivals and fatalities in the Mediterranean, please visit: http://migration.iom.int/europe Learn more about the Missing Migrants Project at: http://missingmigrants.iom.int