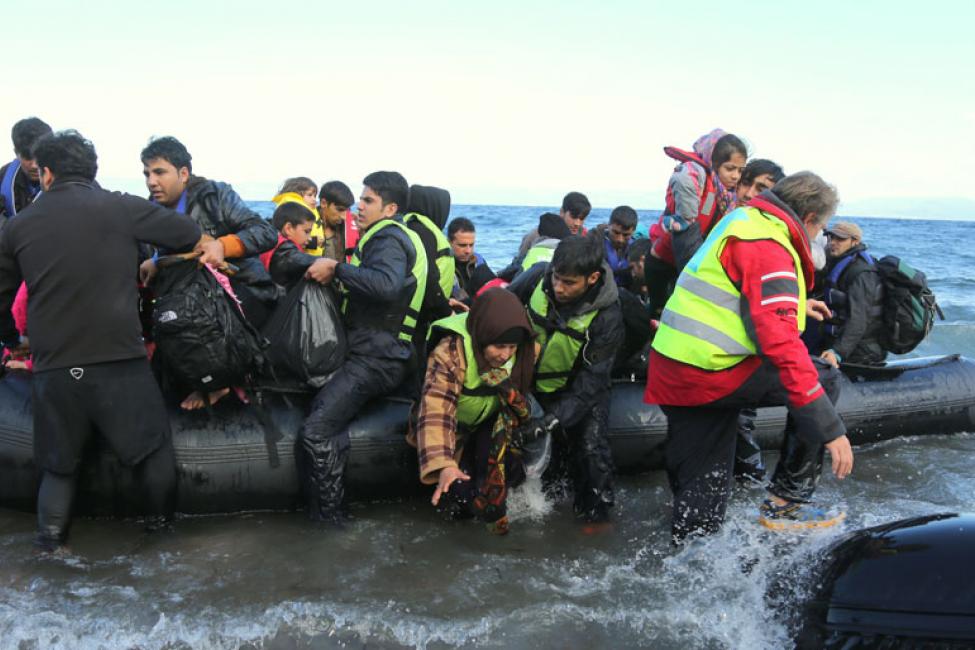 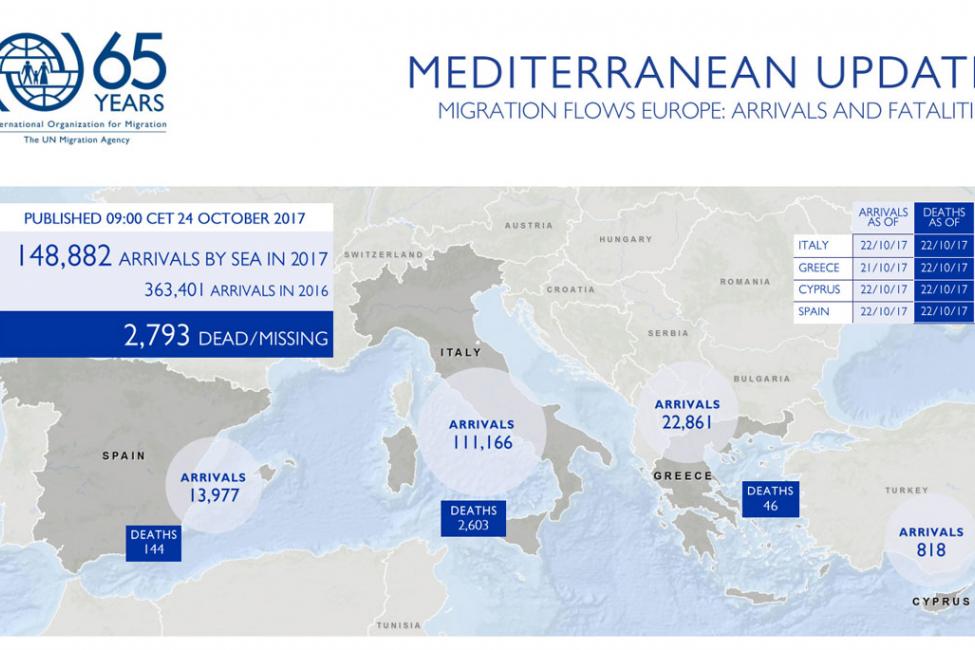 Geneva – IOM, the UN Migration Agency, reports that 148,882 migrants and refugees entered Europe by sea in 2017 through 22 October, with over 75 per cent arriving in Italy and the remainder divided between Greece, Cyprus and Spain. This compares with 324,267 arrivals across the region through the same period last year. IOM Rome reported Monday (23/10) that official figures from Italy’s Ministry of the Interior indicate a total of 111,166 migrants have arrived in Italy by sea this year, 25 per cent fewer than by this same time last year. Italian authorities also disclosed arrivals of 1,286 Tunisians during the month of September this year, or just a few dozen fewer than the 1,357 Tunisians arriving during 2017’s previous eight months (1 January – 31 August, 2017).

According to IOM estimates, 1,500 Tunisians have arrived on Italian shores so far in October, bringing to over 4,100 this year’s total for Tunisian arrivals.  Through all of 2016 a total of 1,207 irregular migrants from Tunisia arrived in Italy by sea, or less than a third of this year’s totals through almost 10 months.

IOM Tunis' Myriam Chabbi reported Monday the overwhelming majority of those leaving Tunisia on this emerging route are Tunisian nationals, not those Sub-Saharan Africans, or Bangladeshi or Moroccans commonly associated with the Libyan smuggling route. "According to the data available, she said, "from 9 October to date, five rescue operations took place, with a total of 121 migrants. Only one was not a [Tunisian] national."

IOM Tunisia noted that Tunisia’s government is taking migration seriously with the inclusion of the national migration strategy in the national development plan 2016-2020.

Among Tunisia's push-factors: lack of access to education, health care, employment. Also, a growing fatigue with prospects for political reform now six years after the start of the Arab Spring, in the country where the regional upheavals began. Another contributor: Tunisia's long tradition of sending its best and brightest north as migrants, especially to Italy and France. "Europe has always been the Promised Land to vulnerable classes," she explained. "Every mother dreams that her daughter marries a 'Zmegri' (migrant). So, now, here come the smugglers! In every popular coffee shop, every neighborhood, there is someone selling the dream."

IOM’s Flavio Di Giacomo reported on Monday on new government figures on the top ten nationalities arriving in Italy via the Central Mediterranean route linking Libya to Europe.  Nigeria remains the single largest sender, with just over 17,000 registered arrivals through the end of September. That’s some 10,000 fewer than the number arriving last year through the same month.

Guinea, Bangladesh and Cote d’Ivoire were listed as the second, third, and fourth largest sending countries, respectively, all recording slightly more arrivals than had come through the first nine months of 2016. Mali, Eritrea, Gambia, Senegal and Sudan were the next largest senders, with all recording fewer arrivals than during the same period last year. Eritrea, like Nigeria, recorded around 10,000 fewer arrivals than came in 2016, and about 30,000 fewer than came in 2015. IOM Athens’ Kelly Namia reported Monday that three events occurred since last Tuesday (17 October) off the islands of Chios and Rhodes requiring search and rescue operations. The Hellenic Coast Guard managed to rescue 99 migrants and transfer them to the respective islands.

Namia further reported that 756 migrants or refugees entered Greece by sea in four days from 18-21 October, bringing migrant sea arrivals to Greek territory to 3,187 through the first three weeks of October, and to 22,861 for the year so far. (See chart below.)

No rescue or interception operations were reported during the period from Friday through Monday.

So far this year, 18,815 migrants have been rescued/intercepted in Libyan waters.

The Malian government with the support of the UN Migration Agency in Bamako welcomed last Friday the voluntary return of 163 Malian migrants who were stranded in Libya. The majority of those Malians returned were between 18 and 40 years old, although there were four minors on the chartered return flight. Several among the returnees were stranded for many years in Libya, while others were determined to make it to Europe.

Abdullah, 30 years old and married with one child, told IOM he arrived in Libya last October, hoping to reach Italy. “I decided to come back to Mali, because of the difficult situation in Libya. I will never forget that I spent so much money on my journey. In our attempt to cross the Mediterranean Sea, we were 137 people in a boat. Twenty-seven of them survived after the boat collapsed. They took the engine of our boat and left us alone in the sea. We spent three days at sea, without support. I saw children and pregnant women who didn’t make it.”

Abdullah explained, after he was rescued: “Libyan police found us and took us to the prison in Griane. I spent eight months in prison, in horrible conditions. Sometimes we didn’t get food, and they beat me every morning. I was released after the payment of ransom by my parents. The embassy of Mali in Libya and IOM helped me to come back to Mali.”

The delegate of Malians Abroad and African Integration Ministry, Salif Sidibe said, “It is very hard to see compatriots who were really in distress in Libya.”

He explained that “All 163 migrants were imprisoned in Libya and were identified at the Embassy of Mali in Libya before arriving safely in Bamako, thanks to IOM's assistance.”

This year alone IOM has conducted four return flights to Mali, with over 600 Malians returning from Libya.

Worldwide, IOM’s Missing Migrants Project (MMP) has recorded the deaths of 4,757 people migrating in 2017.  In the Central Mediterranean, the remains of nine people have been recovered off Libya in the past five days: one body was found in Al Maya on 19 October and eight bodies were retrieved near Al Khums on 21 and 22 October. Additionally, one man drowned yesterday (22 October) off the coast of Melilla, Spain. These deaths bring the total of fatalities in the Mediterranean in 2017 to 2,793.

On the US/Mexico border, one Mexican man drowned in the Río Bravo on 20 October near Eagle Pass, Texas. In Mozambique, 11 Malawians lost their lives and seven were injured in a vehicle accident on 9 October in the district of Tsangano, near the border with Malawi.

Additionally, MMP recorded the deaths of 29 Rohingya who drowned in the Naf River as they tried to cross from Rakhine State, in Myanmar to Bangladesh in several incidents between 31 August and 20 September 2017. Since August 31 of this year, 243 Rohingya have died trying to cross into Bangladesh.