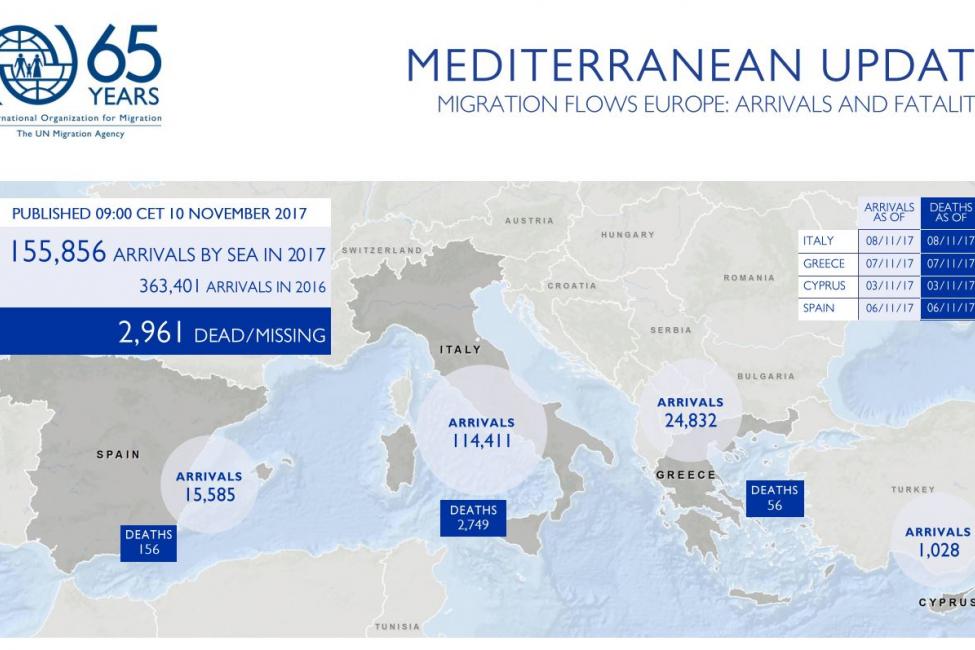 Geneva – IOM, the UN Migration Agency, reports that 155,856 migrants and refugees entered Europe by sea in 2017 through 8 November, with just over 73 per cent arriving in Italy and the remainder landing in Greece, Cyprus and Spain. This compares with 340,934 arrivals across the region through the same period last year. IOM Rome reported Thursday (9 November) that 114,411 migrants or refugees have landed in Italy after departing North Africa since the first of this year – which is a decline of over 30 per cent from the 164,822 arrivals to Italy along this route through 8 November 2016.

IOM Rome also released figures Thursday from Italy’s Ministry of Interior which show that through 31 October, Nigeria remains the largest sender of sea-borne migrants along the Central Mediterranean route, although its numbers appear to be falling, along with those from elsewhere in Sub Saharan Africa (see chart below). The end-of-October figures show 17,462 Nigerians have been registered as arrivals in Italy since 1 January, almost twice the total from the second top sender, Guinea (Conakry), which registered 9,361 arrivals during those same ten months.

Nonetheless, the numbers arriving from both countries just in October, were smaller than usual: from Nigeria, just 362 men, women and children; from Guinea, just 144.  Similar numbers were reported from this year’s other leading senders. Bangladesh, with 8,896 arrivals this year, showed just 26 arrivals in October; Eritrea, with 5,739 for the entire year, registered just 28. The Gambia, with 5,691 for the year, registered only 42 new arrivals in October while neighbouring Senegal (5,786 for the year) reported only 170 in October.

Tunisia was the country that showed the most activity into Italy in October, with 2,733 new arrivals during the month, or more than all the arrivals (2,643) from Tunisia that landed between January and September (5,433). Moreover, Tunisians and Moroccans (320 arrivals) represented a slim majority of all arrivals to Italy for the month (5,979, see chart below). With November’s arrival numbers showing an uptick through the first eight days of the month, the Tunisian surge appears to be something of an anomaly. In the Central Mediterranean on 6 November, a rubber boat carrying approximately 140 migrants capsized 30 nautical miles north of Tripoli, Libya. Both the Libyan Coast Guard and the NGO Sea Watch took part in a rescue operation, reporting at least five people had died, including one child.

While 58 people were rescued by Sea Watch, the Libyan Coast Guard intercepted 48 survivors – the reports of 140 migrants on the boat would indicate that an estimated 29 remain missing.

On 7 November in the Western Mediterranean, one migrant was found dead in a dinghy intercepted by the Moroccan Navy off Tangiers, Morocco. Missing Migrants Project (MMP) added one more death from an incident on 3 November in the Eastern Mediterranean, where IOM Greece confirmed three deaths and seven missing from an earlier report of six missing. These deaths bring the total of fatalities in the Mediterranean in 2017 to 2,961, compared with 4,303 through the same date in 2016.

IOM Athens’ Kelly Namia reported Thursday (09/11) of at least five incidents off the island of Lesvos that required search and rescue operations. The Hellenic Coast Guard managed to rescue the 158 migrants and transfer them to Lesvos.

Since 1 August, a total of 13,427 men, women and children have entered Greece by sea from waters of the Eastern Mediterranean. That is more migrants than entered during all of 2017’s first seven months. Namia further reported that just over 1,000 migrants or refugees entered Greece by sea during the first week of November, bringing migrant sea arrivals to Greek territory to 24,832 for the year so far (see chart below).

Worldwide, IOM’s Missing Migrants Project has recorded the deaths of 5,005 people migrating in 2017 through 8 November. MMP noted that the 5,000 mark was reached last year on 26 August, and in 2015, on 20 October. Because of the way data was compiled in 2014, MMP’s first year, there is no way to determine on what date migrant deaths that year passed the 5,000 mark (see chart below).

As has been true most weeks since MMP began tracking migrant fatalities, the Mediterranean remains the most lethal migrant location. Additionally, three migrants died and three went missing this month after a boat capsized between the French island of Mayotte and Comoros Islands on 2 November.

MMP also received data from the Pima County Officer of the Medical Examiner regarding migrant deaths in Pima County, Arizona, for the month of October: the remains of six migrants who lost their lives crossing the US/Mexico border were recovered at different locations. Between January and October of this year, the remains of 117 migrants had been recovered in southern Arizona. The MMP team also received disaggregated data from the South Texas Human Rights Centre on migrant deaths in Brooks County, Texas: the remains of 44 people were retrieved this year in different ranches across the county.