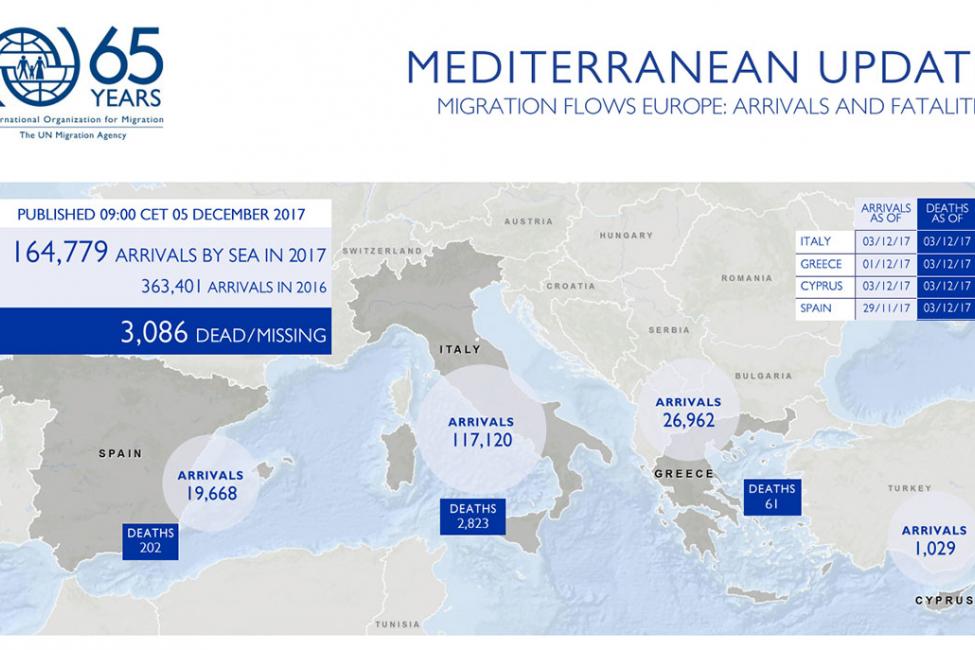 Geneva – IOM, the UN Migration Agency, reports that 164,779 migrants and refugees entered Europe by sea in 2017 through 3 December, with just over 70 per cent arriving in Italy and the remainder divided between Greece, Cyprus and Spain. This compares with 351,076 arrivals across the region through the same period last year.

IOM Rome reported Monday (4 December) that, according to Ministry of Interior figures, 117,120, or just 78 through the first three days of this month. For the year to date, totals are approximately 32% fewer than arrived by sea to Italy at this point last year.
Since 1 August 2017 a total of 21,903 men, women and children have arrived in Italy by sea from North Africa. That amount is nearly identical to the totals arriving in August alone both in 2015, and again last year. Overall, the months of August-November 2017 witnessed roughly one-quarter of the migrant total (79, 615) that arrived in Italy last year during a similar period and less than half the total (50,667) arriving in 2015 during the same months (see chart below). IOM Cyprus'  Dimitrios Tsagalas reported Tuesday morning on a boat arrival with migrants on board, spotted at the Kato Pyrgos area in Pafos. IOM Cyprus said the boat was observed by authorities at 01:00 am on 05 December and was said to be carrying 38 migrants (33 men, one woman and four children) all of Syrian nationality. These migrants were transferred to the city of Polis in the Pafos area for health and police checks at 03:00 AM. Later today they are expected to be transported to the Purnara Reception Centre.
IOM’s Missing Migrant Project (MMP) confirmed that on Thursday, 30 November, the Moroccan Coast Guard rescued six occupants of a boat reportedly with 34 migrants on board. Today’s report treats as presumed dead the 28 missing migrants, reportedly all from sub-Saharan Africa, a group said to have included four women, 23 men and one child.
IOM also updated a report of a shipwreck in the Central Mediterranean which occurred on 23 November, in which UNHCR reported an additional 20 migrants of unknown origin were lost at sea. At least one was an Eritrean woman, who was reported dead by family members who were rescued.
These losses bring to 3,086 the total number of men, women and children lost on the Mediterranean through 3,337 days of the current year. That is an average daily death toll of just over 11 people per day. Last year, at this time, Missing Migrants recorded 4,757 victims on the Mediterranean, or over 14 per day.
Worldwide, Missing Migrant Project has recorded the deaths of 5,194 people during migration in 2017. In addition to the 48 new deaths reported in the Western and Central Mediterranean, MMP learned that in Turkey, ten Syrians – including six children – died this past weekend in a minibus accident. Eight more Syrians were injured in the accident, which occurred on Sunday in the Hatay district of Turkey. These deaths mark the third incident in the last two weeks in which IOM has recorded the deaths of migrants attempting to travel overland between Turkey and Greece.  (see chart below)
Missing Migrants Project (MMP) data are compiled by IOM staff but come from a variety of sources, some of which are unofficial. To learn more about how data on missing migrants are collected, click here.