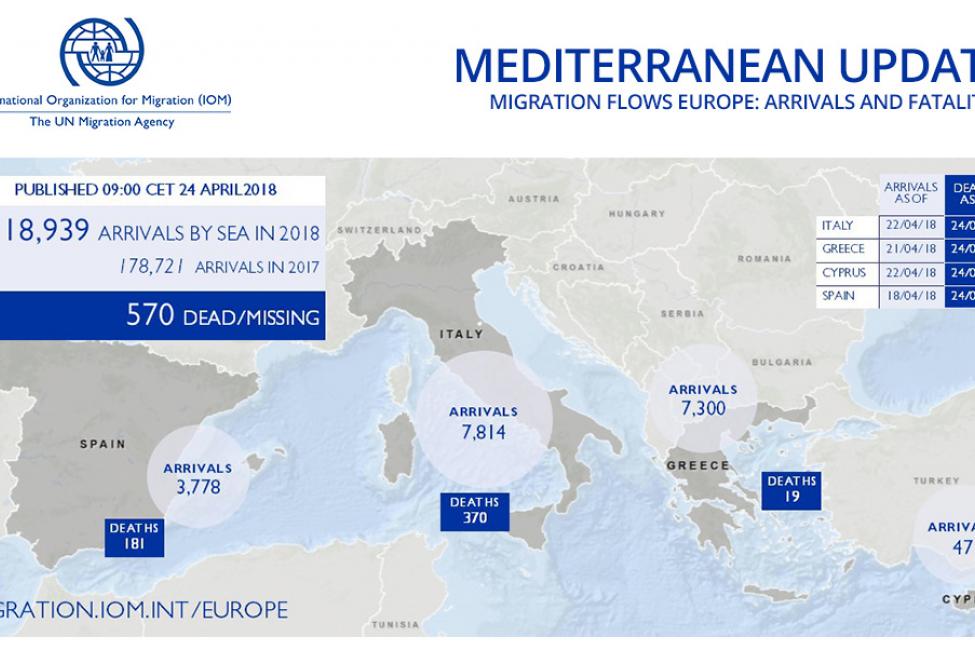 Although fatalities, too, are down across much of the region, they do continue. At least 12 people died over the weekend on the Central Mediterranean route. IOM’s Missing Migrants Project (MMP) reported that off the coast of Sabratha, Libya, the remains of ten men and one infant were recovered on Sunday by the Libyan Coast Guard.

A sister of one of the dead was on the same boat and could identify her brother, a Nigerian man.  Otherwise, the identities of those who died are currently unknown.  On Monday, IOM learned of one other fatality in the area.

On Monday (23 April) IOM Italy reported over 1,000 migrants have been rescued over the weekend by Italian and international rescue ships in the Mediterranean who carried out a total of 14 operations: 417 migrants were rescued on Saturday and 512 on Sunday. Some of the migrants have already been brought to Italy yesterday, while others are being brought to land today (Tuesday).

Fewer than 200 migrants were Tunisians, said IOM Italy’s Flavio Di Giacomo, who explained they were rescued while travelling in small groups, generally on small wooden boats. The rest of migrants were mainly African migrants fleeing Libya. In one case migrants were rescued on a big wooden boat with two decks. The 224 people on board were rescued by the ‘Aquarius’ (NGO SOS Mediterranée), in very difficult conditions.

“We haven’t seen two-decked wooden boats for quite a long time, since migrants arriving from Libya usually travel on rubber dinghies,” Di Giacomo, the IOM Italy spokesperson, explained. “In this case, the boat was mainly carrying Eritrean migrants, persons who – according to witness testimonies – had been victims of violence and ill treatment in Libya.” IOM Libya reported the Libyan Coast Guard and local fishermen rescued 291 migrant men, women and children over the weekend. IOM Libya’s Christine Petré reported six migrants were rescued by local fishermen outside Surman (two men from Guinea, one woman from Cameroon and three men from Côte d’Ivoire). Two were immediately transferred to a hospital, where IOM provided medical services; both have now been discharged.

The rest of the migrants, 83 of them, believed to have been on the same boat, included women from the Gambia, Côte d’Ivoire, Mali, Nigeria, Senegal, Guinea and Cameroon who were transferred to Shuhada al Nasr detention centre after being brought back to Libyan shores by the Coast Guard. Many suffered from minor injuries while three migrants received urgent medical care.

Another group, 203 migrants (including 39 women and one child), were returned by the Libyan Coast Guard to a Tripoli disembarkation point where they received medical assistance, food and water from IOM staff. Most migrants were suffering from headaches, dehydration, cramps and muscular pain. Most of the migrants come from Bangladesh, Somalia and Sudan. The chief of the disembarkation point thanked IOM for being the only humanitarian organization present upon disembarkation.

On Monday, the IOM LIbya spokesperson added, 125 migrants (79 men, 40 women and six children) were returned to Libyan shore by the Coast Guard. While the Libyan Coast Guard worked on registering all migrants, IOM provided all migrants with basic health and protection screenings, as well as food, water and juice. Five pregnant women and five children below the age of 5 were identified and received health check-ups. No urgent medical cases were identified.

These migrants reportedly embarked from Azzawiyah on a rubber boat, the majority of the migrants come from Ghana, Nigeria, Cameroon, Chad and Guinea Bissau. All migrants were transferred to Trig al Seka detention centre.

So far this year, 4,790 migrants have been returned to Libyan shore by the Libyan Coast Guard.

Petré also reported nearly 600 migrants from 10 countries were returned from Libya during the first two weeks of April. Over the past 16 months, some 25,000 stranded migrants have been able to go home from Libya with IOM’s assistance, returning to 30 countries.

IOM Greece’s Kelly Namia reported Thursday that over the four days (18-21 April) there were two incidents requiring search and rescue operation off the island of Lesvos. The Coast Guard rescued  83 migrants and transferred them to that island.
Namia reported as well that another seven migrants landed at Rhodes, bringing to 7300 the total number of irregular migrants landing by sea in Greece since January 1, for an average of about 66 per day. She noted no arrivals were reported during three days last week: 19-21 April.

According to figures compiled by the Turkish Coast Guard (TCG), a total of 6,718 migrants have been apprehended/rescued at sea so far this year. In the same period last year (1 January – 23 April 2017), 4,157 were apprehended/rescued, constituting a 62 per cent increase.

Pinar Genc Akcakaya from IOM Turkey attributes the large increase in the number of migrants attempting to cross from Turkey to Greece to the lack of economic opportunity in countries of origin and the desire to reunite with family members who have already reached Europe. Akcakaya reported that IOM has provided 3,402 rescued migrants with humanitarian assistance so far this year including Syrians (68%), Angolan, Central African and other African nationalities (21%), Afghans (8%), and other nationalities (3%). Lado Gvilava, IOM’s Chief of Mission in Turkey, emphasized the important role IOM is playing in developing the capacity of the TCG to curb irregular migration. He said, “Migratory routes through Turkey to Europe continue to be very active, putting immense pressure on local capacity to manage responses. IOM continues to do its part by providing crucial assistance to rescued migrants at its reception centre, ensuring their safety and wellbeing.”

Gianluca Rocco, IOM’s Chief of Mission in Greece, reported that IOM is coordinating with the Greek authorities in closely monitoring the situation and tracking developments related to the steep increase so far this year in migrant arrivals to Greece.  He noted that there were 6,000 new arrivals to Greece in the first three months of 2018, an average increase of 35 per cent in comparison to the inflows detected during the same period of 2017.

According to IOM teams in the field, the number of persons crossing into Greece with various vulnerabilities – such as families and unaccompanied migrant children – also is increasing. He said that the number and pace of the new arrivals raises concerns about future spikes and increased migrant vulnerabilities.

Eugenio Ambrosi, Director of IOM’s EU office in Brussels, remarked that because arrivals to the Greek islands have been on the rise, reception centres are becoming overpopulated and creating tensions among migrants, local authorities and local communities. At the same time, he noted, exceptionally high numbers of newly arriving migrants are increasingly detected at the land borders with Turkey at Evros where reception conditions in that area are limited.

“The situation is challenging to deal with under the current reception system because available accommodation has almost reached full occupancy. IOM is working closely with government authorities to address this situation and engaging with international actors to jointly identify alternatives and immediately respond to any emerging emergency situations,” said Ambrosi.

With the remains discovered Monday, total Mediterranean deaths in 2018 number 571, compared with 1,091 a year ago – or just 52 per cent of the 2017 total thus far. Worldwide, IOM’s Missing Migrants Project has recorded 962 people who died or went missing while migrating in 2018. (see chart below)

The identities of most of the known migrant deaths over the past few days are unknown, and tragically, will likely remain so. Last Wednesday, one Indonesian migrant is thought to have drowned off the coast of the small Singaporean island of Pedra Branca. The migrants were en route from Malaysia back to Indonesia when their boat ran out of fuel and they became stranded. The Singaporean Coast Guard performed a rescue mission to save the over one hundred other migrants on board.

In Eastern Turkey, two migrants died last Thursday when the truck in which they were riding lost control and overturned. Over 130 other migrants were also riding in the back of the truck and survived the accident. Also last Thursday, four Venezuelans drowned in the Táchira River on the border with Colombia. The water level of the river, which traces part of the border, is reported to be particularly high, and thus particularly dangerous, at the moment.  Two of the dead were a father and his 16-year-old son.

On Friday, a migrant around 30 years old was found dead outside Thessaloniki, Greece when he was electrocuted when he climbed on top of a freight train.

Since the beginning of 2016, MMP has recorded ten fatalities with the same cause of death in Europe.  Ten fatal rail incidents involving migrants have already been recorded in Mexico in 2018.
MMP data are compiled by IOM staff but come from a variety of sources, some of which are unofficial. To learn more about how data on missing migrants are collected, click here.