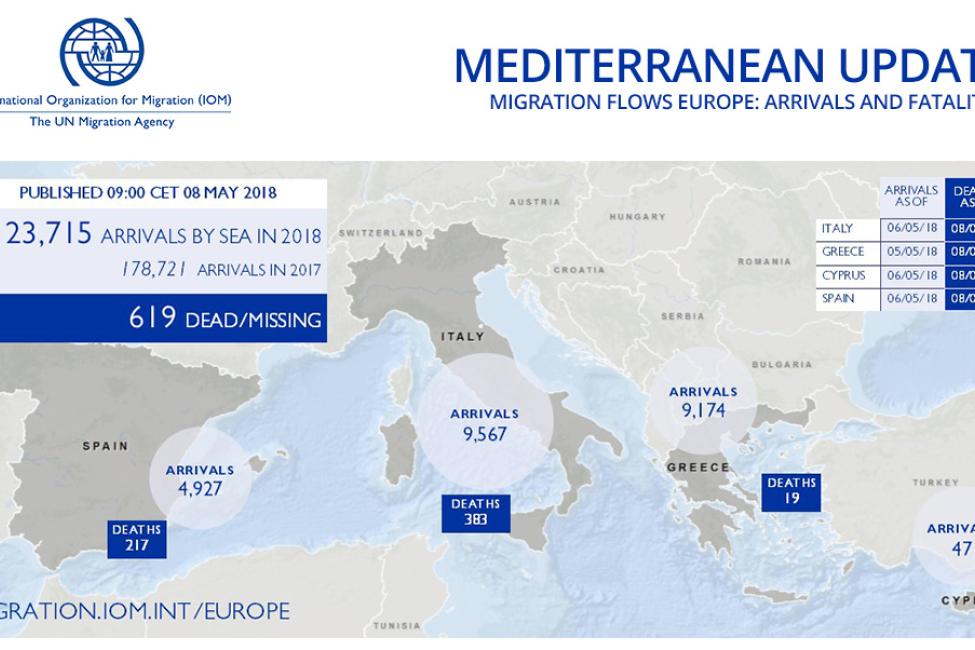 Geneva – IOM, the UN Migration Agency, reports that 23,715 migrants and refugees entered Europe by sea through the first 125 days of 2018, with about 39 per cent arriving both in Italy and Greece, with the remainder arriving in Spain (20%).

IOM Rome’s Flavio Di Giacomo reported that 9,567 migrants and refugees reported arrived in Italy in 2018 represent  nearly a 76 per cent decline from the 41,165 arriving to this point in 2017.

Di Giacomo reported that over 160 migrants had been rescued at sea over the weekend in the waters between Italy and Libya. The most important rescue operation was carried out by the NGO Open Arms vessel “Astral,” which rescued a dinghy carrying 105 people coming from several West and North African countries.

Di Giacomo noted that in these months rescue operations also have been carried out by the Libyan Coast Guard, calculating that one out of three migrants departing from Libya this year is met by the Libyan Coast Guard and turned back. As already stated in the past, IOM has welcomed the strengthening of Tripoli’s Coast Guard with the expectation that this will further the emergence of an efficient rescue system capable of rescuing boats in difficulty even close to the African coastline, where European vessels often cannot arrive in time to mitigate shipwrecks.

At the same time, IOM has emphasized there must also be an adequate reception system on shore that complements the efforts of authorities’ rescue capacity at sea. The current reception system, despite recent improvements, remains unacceptable as migrants remain in detention after being returned. IOM advocates the establishment of open centres, where women and children can be separated from men and where migrants’ conditions of vulnerability can be thoroughly assessed.

IOM Libya’s Christine Petré reported that on Sunday (6 May) more than 400 migrants were returned to Libyan shore by the Coast Guard in four different search and rescue operations. IOM provided migrants with emergency humanitarian assistance including basic health and protection screenings with phone calls to loved ones, as well as food, water and juice. Four migrants were transferred immediately to hospital for further medical treatment; in addition, among the women were several pregnancy cases. Among the migrants was also one dead body.

On Monday (7 May), 488 migrants (including more than 20 children) were returned to Libyan shore by the coast guard in two different search and rescue operations. IOM provided migrants with emergency humanitarian assistance including basic health and protection screenings, as well as food, water and juice.

So far this year, more than 5,947 migrants have been returned to Libyan shore by the Libyan Coast Guard (see chart below).

IOM’s Missing Migrants Project reported on Monday (7 May) that in the Mediterranean alone, 619 migrants are estimated to have died this year, 383 on the Central Mediterranean route linking North Africa to Italy. Most recently, the Libyan Coast Guard reported that four migrants died during a rescue operation on Sunday. The body of a man from Africa was recovered, but three other migrants remain lost at sea.

In Spanish waters so far, this year IOM Madrid’s Ana Dodevska reports that according to information published this week by Salvamento Maritimo, in the first seven days of May, a total of 527 migrants have been rescued on the Western Mediterranean route bringing to 4,927 the total number of men, women and children have been rescued trying to enter Spain by sea through 6 May this year. That compares with 4,161 through all of May last year and 2,091 through the first five months of 2016 (see charts below).

MMP reports that 217 sea fatalities have been reported this year on the Western Mediterranean route, compared with 224 fatalities recorded on this same route through 12 months of 2017. IOM Greece’s Kelly Namia reported Monday that over four days (2-5 May), the Hellenic Coast Guard reported at least three incidents requiring search and rescue operations off the island of Lesvos and Chios. The Coast Guard rescued 105 migrants and transferred them to these two islands.

Namia reported that along with other landings on Lesvos and Chios – as well as the islands of Kos, Farmakonisi and Samos – another 553 migrants landed in the Aegean these four days bringing to 9,174 the total number of irregular migrants entering Greece via sea since January 1– for an average of just over 70 persons per day.

April saw 3,083 migrant arrivals via the Eastern Mediterranean. Already over 900 irregular migrants have landed on these shores in May – just five days into the month (see charts below). Worldwide, IOM’s Missing Migrants Project has recorded 1,076 people who died or disappeared during migration thus far in in 2018 (see chart below).

On Friday, a man drowned trying to cross the Río Bravo/Rio Grande in an effort to reach the US; it was the 23rd death in the border river recorded this year and the third in the last week. MMP recorded 22 drownings along the Texas-Mexico border through this date in 2017.

Another migrant was killed on Friday after he fell from a freight train in Queretaro, Mexico. The dangers of travelling north on such trains are so notorious that migrants have nicknamed them ‘La Bestia’ – the Beast. Friday’s accident was the 11th train-related death recorded in Mexico this year – a rate of almost one fatality every ten days.

In addition, the Missing Migrants Project recorded the deaths of three refugee children in Uganda after their bus travelling from the border with the Democratic Republic of the Congo crashed. Two children, aged 4 and 8, died at the site of the crash, while another passed away in a nearby hospital the next morning. At least 56 Congolese nationals have died while attempting to flee violence in their home country in 2018 alone.