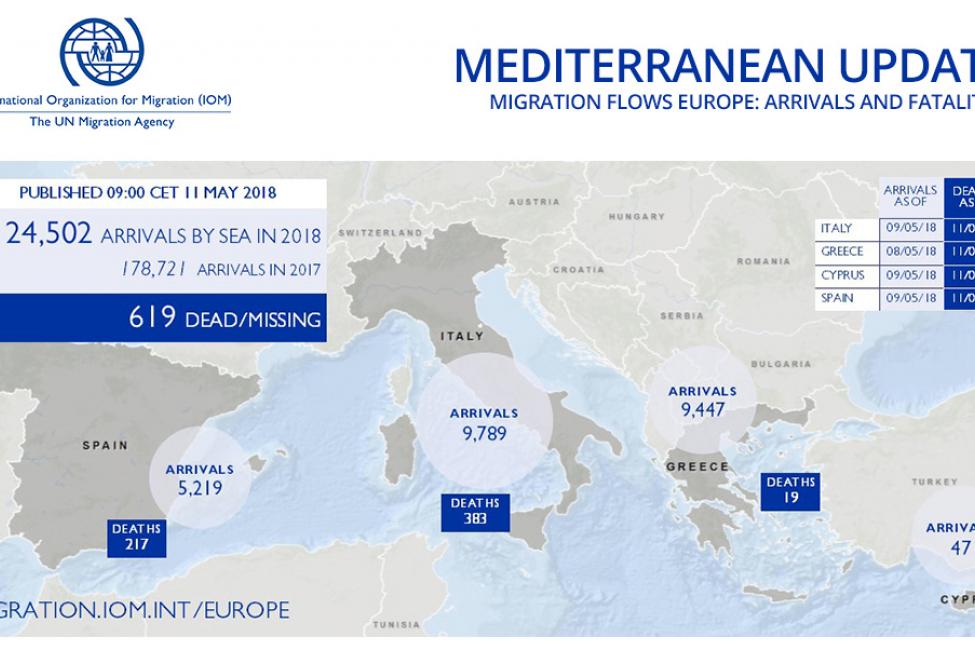 Geneva – IOM, the UN Migration Agency, reports that 24,502 migrants and refugees entered Europe by sea through the first 129 days of 2018, with about 39 per cent arriving both in Italy and Greece, with the remainder arriving in Spain (20%).

No deaths were reported in the region since last weekend. This year’s fatalities – 619 drowned or missing men, women and children – is less than half the total on this date in 2017 (1,338) and smaller still than the total at this time two years ago, when IOM recorded 1,380 deaths across three Mediterranean Sea routes.

Thus, despite being the start of what traditionally has been the busiest migrant-crossing season to Italy, totals this year indicate May arrivals may barely reach the 1,000+ threshold of past years, when that figure was passed rather routinely in the month's fist days.

In Spanish waters so far this year IOM Madrid’s Ana Dodevska reports that 5,219 irregular migrants and refugees have been registered arriving since January 1. That’s a 57 per cent increase over this same period in 2017 (see charts below). Dodevska further reports that according to information published by Salvamento Maritimo, the number of rescues in May per day was as follows: IOM Greece’s Kelly Namia reported Thursday that over three days (6-8 May) the Hellenic Coast Guard notified IOM of at least three incidents requiring search and rescue operations off the islands of Lesvos and Crete. The Coast Guard rescued 155 migrants and transferred them to these islands.

IOM’s Antigoni Avgeropoulou further reported that the landings in Crete – or about 50 migrants – appear to have been from a voyage that left Crete bound for Italy but was forced to return to that island. IOM staff attended to the migrants once they were ashore.

Kelly Namia reported that along with other landings on Levos, Kos and Samos another 128 migrants landed in the Aegean these same days bringing to 9,447 the total number of irregular migrants entering Greece via sea since 1 January – for an average of around 74 persons per day.

April saw 3,083 migrant arrivals via the Eastern Mediterranean. Already nearly 1,200 irregular migrants have landed on these shores in May – just eight days into the month – or about twice 2018’s average since the year began (see charts below). Worldwide, IOM’s Missing Migrants Project has recorded 1,076 people who died or disappeared during migration thus far in in 2018 (see chart below).