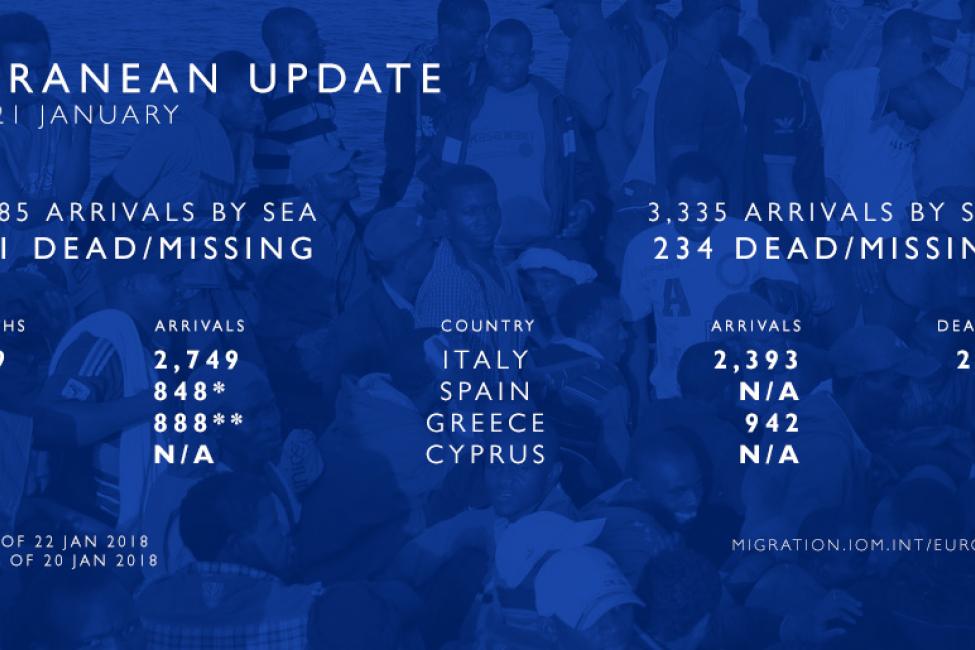 Geneva – IOM, the UN Migration Agency, reports that 4,485 migrants and refugees entered Europe by sea through 21 January. This compares with 3,335 coming ashore during a similar period in 2017. Italy accounts for approximately 60 per cent of the total, with the remainder split between Spain (19 per cent) and Greece (20 per cent).

IOM Italy’s Flavio Di Giacomo reported Monday (22/01) that a total of 2,749 migrants or refugees have arrived in Italy by sea this month, according to official Italian Ministry of Interior figures. That’s about a 15 per cent increase over the same period in January 2017, at the start of a late winter flow when arrivals quickly outpaced the totals from previous winters (see chart below). IOM Athens’ Kelly Namia reported Monday that over four days, 17-20 January, the Hellenic Coast Guard reported one incident requiring search and rescue operations off the island of Lesvos. The Coast Guard rescued 32 migrants and transferred them to the respective island. Fewer than 50 migrants arrived during those days.

Greece arrivals this year continue a trend that began in 2017, when migrant arrivals along the Mediterranean Sea’s Eastern routes hit their lowest levels in four years (see chart below).

In Tunis, IOM's Olivia Headon reported that from 7 January through 17 January, coastal authorities in Libya have intercepted or rescued 1,497 migrants attempting to reach Europe by sea. Included in that figure were 81 children. IOM Libya also learned yesterday that fishermen near Qarapoli retrieved the remains of an African man. Authorities said the man's body was tangled in fishing nets and that this was the second such incident in recent days.

Since the last IOM report on Friday (19/01) the organization’s Missing Migrants Project (MMP) added two more deaths in the Mediterranean, both on the Western route linking Africa to Spain. Two men, of Sub-Saharan origin, were pulled from the water 10 miles west of the Island of Alboran on Saturday, (20/01) after their boat sank while trying to reach Spain, according to the Spanish maritime rescue service.  Thirty-four others were rescued and brought to Almería, Spain.

Worldwide, IOM’s Missing Migrants Project (MMP) has recorded the deaths of 310 people during migration in 2018, many of those recorded at sea (see chart below). Over the weekend, local authorities in Curaçao reported that human remains were found on the northeast shore of the island that could be connected to the shipwreck of 10 January, in which five Venezuelan migrants lost their lives. Venezuelan civil protection officials said they have accounted for 16 survivors of the voyage which may have had as many as 34 people on board when their vessel departed South America, all believed to be Venezuelan. An estimated 13 migrants remain missing.
On the US/Mexico border, winter cold continues to take its toll. The remains of five migrants who appeared to have died from hypothermia were recovered by authorities in Brooks County, Texas, on 21 January.

In the Middle East last week, 16 Syrian refugees lost their lives near the Masna’a border crossing in eastern Lebanon during a winter storm. Local authorities confirmed that 14 bodies (six women, two children and six men) were retrieved on Friday (19/01), while the bodies of a 30-year-old woman and a 3-year-old girl were found on Sunday, 21 January.

In Central Asia, 52 Uzbek migrant workers died last week in a bus fire in the Aktobe region in Kazakhstan. The bus was traveling along a road frequently used by migrant workers heading to the Russian border. Five people managed to escape the burning vehicle and survive the fire.