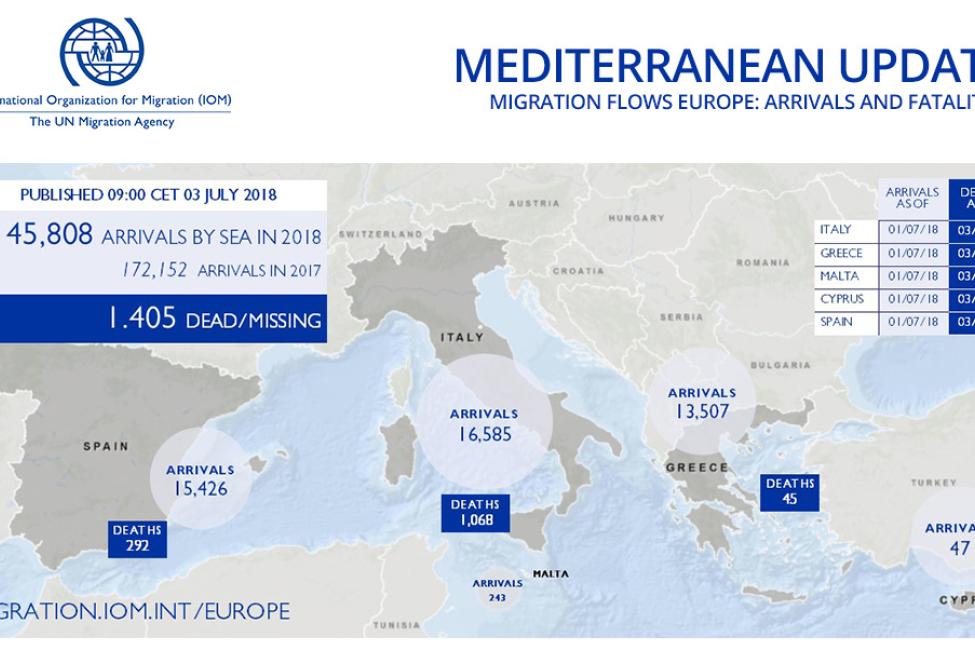 Geneva – IOM, the UN Migration Agency, reports that 45,808 migrants and refugees entered Europe by sea in 2018 through 1 July, with just around 36 per cent arriving in Italy and the remainder divided between Greece (29%) and Spain (34%). A small number of arrivals have been reported landing this year to Cyprus and Malta, 47 and 243 migrants, respectively, or less than 1% of all Mediterranean Sea arrivals. IOM’s Missing Migrants Project has recorded that in the Mediterranean alone, 1,405 people have lost their lives at sea since the beginning of the year. Most recently, 218 people drowned in the Central Mediterranean off the coast of Libya. On Friday, 29 June, a boat capsized north of Tripoli – 16 survivors were rescued by the Libyan Coast Guard, while an estimated 104 people lost their lives. The remains of three babies were recovered, while survivors interviewed by IOM staff upon disembarkation reported than an estimated 101 people remain missing. On 1 July, another boat capsized off the coast of Al Khums. According to survivors, at least 114 people tragically died during the shipwreck: 91 men, 20 women and 2 children went missing. In the first six months of 2018, 1,068 people have drowned in the Central Mediterranean.

IOM Athens’ Christine Nikolaidou reported Monday that there were at least five incidents requiring search and rescue operations off the islands of Chios, Farmakonisi, and Kos. The Hellenic Coast Guard rescued a total of 148 migrants and transferred them to those respective islands.

Nearly 200 more migrants were reported arriving between 28 June and 1 July to Lesvos and Megisti for a total of 350 during the weekend. Through Sunday, 1 July, the total number of sea arrivals to Greek territory since January 1 is 13,507 (see chart below).

IOM Madrid’s Ana Dodevska reported Monday that total arrivals at sea in 2018 have reached 15,426 men, women and children who have been rescued in Western Mediterranean waters through 1 July. Nearly half of that total – 7,264 people – arrived only in the past 31 days (see charts below).For the month of June, nearly twice as many migrants have arrived by sea to Spain than to Italy, nearly three times as many as have arrived in Greece. Worldwide, IOM’s Missing Migrants Project has recorded 2,098 people who died or went missing while migrating in 2018 (see chart below).
On the US/Mexico border, at least five people lost their lives over the past few days. On 22 June, a 29-year-old Honduran migrant drowned in Los Olmos Creek, while attempting to circumvent the US Border Patrol Saritas checkpoint in Kleberg County, Texas.
On 26 June, the remains of a 28-year-old Guatemalan man were found in the Arizona desert, near Benson, in Cochise County. One day later, US Border Patrol officers found the remains of two migrants in Hidalgo County, Texas: a body was found in a ranch near Sullivan City, while another body was recovered from the Río Bravo near Peñitas. The remains of another migrant were retrieved on 29 June in a ranch near Falfurrias, in Brooks County, Texas.
Additionally, the Missing Migrants Project team recorded the death of a Guatemalan man in Mexico earlier in June. He died of asphyxiation inside a truck on 10 June when making his way north to the US border. His body was repatriated to his hometown in Guatemala’s department of Quiché on 1 July.