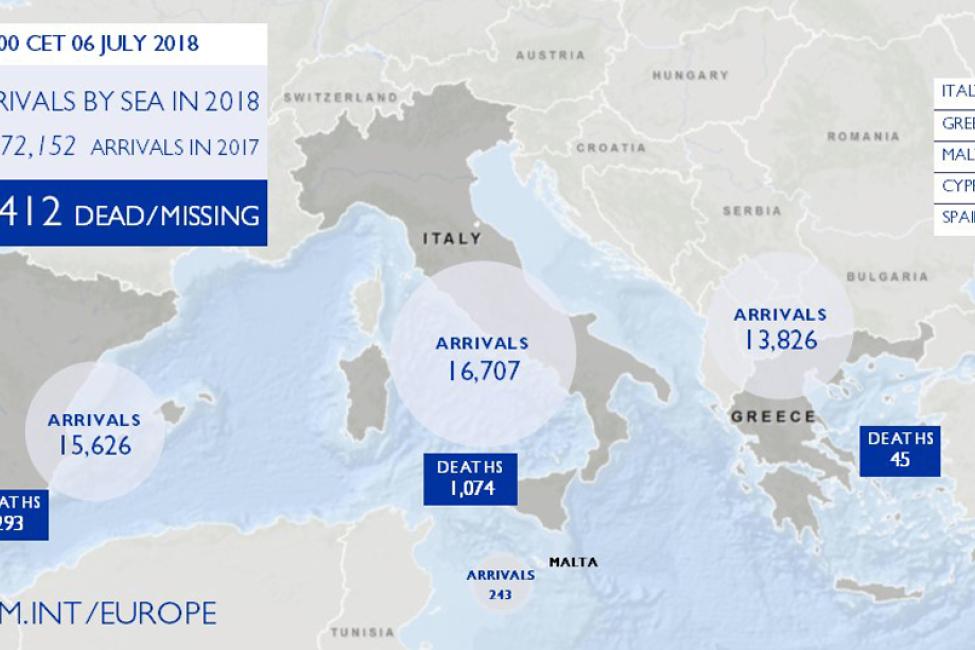 IOM Rome’s Flavio Di Giacomo reported Friday that arrivals of irregular migrants to Italy thus far in 2018 are less than one-fifth (19%) the total arriving through mid-year 2017, and less than one-fourth (24%) the total through mid-year 2016. The downward trend appears to be accelerating (see chart below): monthly arrivals to Italy this year have topped the 4,000-person mark just once, in January. For the previous two years, monthly arrival totals to Italy regularly exceeded 10,000, and 20,000 during summer months.

Nonetheless, irregular sea passage across the Mediterranean’s central route remains treacherous. IOM’s Missing Migrants Project has recorded 1,412 people now have lost their lives at sea in the Mediterranean since the beginning of the year.

Since 18 June, 489 people have tragically died or gone missing in the Central Mediterranean off the coast of Libya. Most recently, the remains of six migrants were recovered by the Libyan Navy from a rubber boat on 3 July, while 125 people who survived the shipwreck were disembarked at the Tripoli Naval Base.
IOM Madrid’s Ana Dodevska reported Thursday that total arrivals at sea in 2018 have reached 15,626 men, women and children, irregular migrants who have been rescued in Western Mediterranean waters through 4 July.

Nearly half of all landings – 7,476 people – arrived just in the past 34 days. Moreover, sea arrivals to Spain by irregular migrants already are over 70 per cent of all of 2017 arrivals, and exceed the arrivals of 2015 and 2016, combined (see charts below). *Source: Spanish Ministry of Interior
*The figures for June 2018 include the migrants who disembarked in Valencia from the Aquarius boat – total of 630 migrants