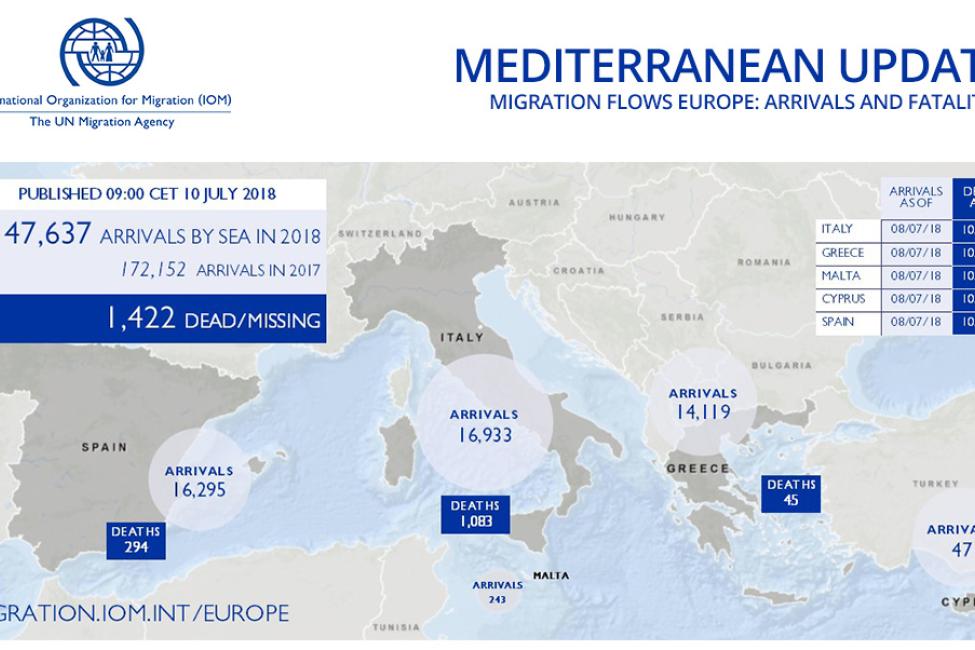 Geneva – IOM, the UN Migration Agency, reports that 47,637 migrants and refugees entered Europe by sea through 8 July 2018. That total compares to 101,392 at this time last year, and over 239,492 at this time in 2016.
Arrivals to Italy, Greece and Spain are about even through 14 weeks. Italy, with 35 per cent of arrivals, remains the busiest destination, barely edging out Spain (34%) and Greece (30%). If these trends persist, Spain looks likely to have had the largest number of arrivals before summer’s end. IOM Rome reported Monday that arrivals of irregular migrants to Italy thus far in 2018 are at 16,933, less than one-fifth (19%) the total arriving through mid-year 2017 and mid-year 2016. The downward trend appears to be accelerating (see chart below): monthly arrivals to Italy this year have topped the 4,000-person mark just once, in January. For the previous two years, monthly arrival totals to Italy regularly exceeded 10,000 and 20,000 during summer months. Nonetheless, irregular sea passage across the Mediterranean’s central route remains treacherous. IOM’s Missing Migrants Project has now recorded 1,422 people who have lost their lives at sea in the Mediterranean since the beginning of the year.
Most recently, a young man drowned in the Western Mediterranean between Morocco and Spain. The online mapping platform Alarm Phone reported that on 3 July, the group was in contact with a boat in distress which was trying to reach Spain from Morocco. Tragically, a young man lost his life before the boat was returned to Morocco. He was 19 years old and from Senegal.
IOM Libya’s Christine Petré reported Monday that since 5 July, the remains of eight migrants were found along the Libyan shore in Tajoura, Garaboli and Suq al Juma. She added that so far this year, 11,311 migrants have been returned to Libyan shore by the Libyan Coast Guard.
IOM Madrid’s Ana Dodevska reported Monday that total arrivals at sea in 2018 have reached 16,295 men, women and children, irregular migrants who have been rescued in Western Mediterranean waters through 8 July.
Just about half of all landings – 8,145 people – occurred just in the past 38 days. Moreover, sea arrivals to Spain by irregular migrants already are almost 75 per cent of all of 2017 arrivals, and exceed the arrivals of 2015 and 2016, combined (see charts below). IOM Athens’ Antigoni Avgeropoulou said Monday IOM has learned that from last Thursday through Sunday (5-8 July) the Hellenic Coast Guard (HCG) reported at least six incidents requiring search and rescue operations off the islands of Lesvos, Samos and Chios. The HCG rescued a total of 228 migrants and transferred them to those islands.
Another 57 migrants were reported landing at Kos and elsewhere, bringing to 319 the total number of arrivals between those four days. Through that date the total number of sea arrivals to Greek territory since 1 January is 14,119 (see charts below). Worldwide, IOM’s Missing Migrants Project has documented the deaths of 2,138 people while migrating in 2018 (see chart below). Besides those on the Mediterranean, there were two more additions to the Missing Migrants Project database since Thursday’s update.
In Mexico, a 28-year-old man from El Salvador died after falling from a freight train near Cañada Morelos, in Mexico’s Puebla state on 5 July. At least 17 people have lost their lives while transiting through Mexico due to rail accidents in 2018. In Europe, a 22-year-old Pakistani man drowned in the Uni River near Bihac, in Una-Sana Canton, Bosnia and Herzegovina on 5 July.