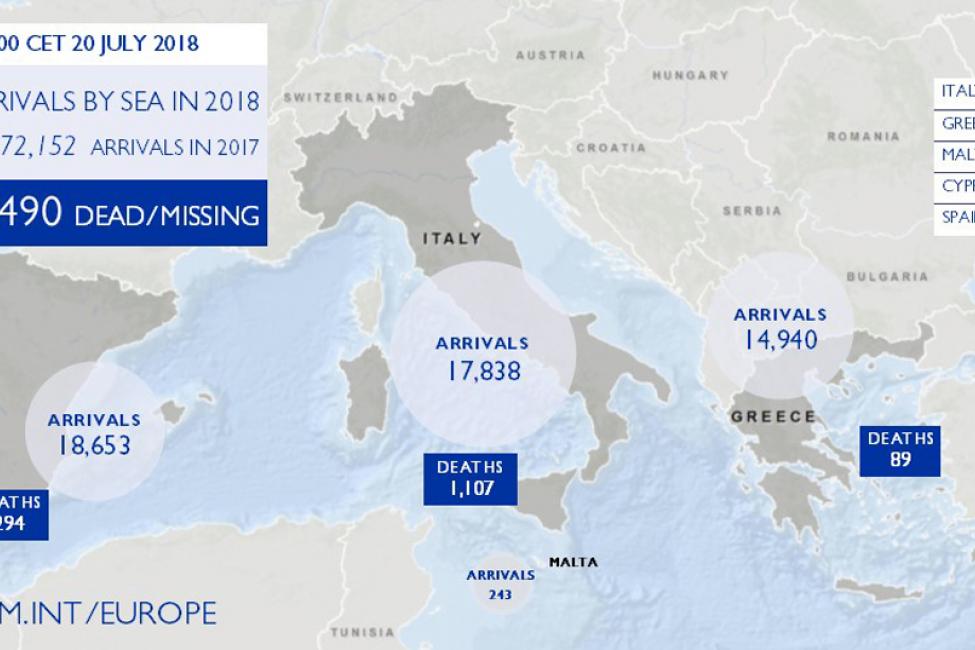 Arrivals to Spain (see chart below) this month have overtaken those to Italy. To date just over 36 per cent of all Mediterranean irregular migrants have come via the Western Mediterranean route, whose irregular migration volume has nearly tripled those registered at this time last year.

Arrivals to Italy are nearly identical, but still trail Spain by just over 800 arrivals. Greece counts about 29 per cent of all arrivals. Significantly, Greece’s arrivals thus far in 2018 are running almost 5,000 ahead of last year’s totals on this date, an increase of better than 50 per cent. Arrivals to Italy, on the other hand, are down over 80 per cent compared to 2017 data.

IOM Rome’s Flavio Di Giacomo reported Thursday that the number (3,136) of irregular migrant arrivals to Italy by sea in June this year was the lowest recorded by Italian authorities since 2014 (see chart below).
Nonetheless, in the month of June, the Central Mediterranean route linking Italy to North Africa recorded the highest number of deaths along this channel in the past four years. In June 2018, some 564 migrants were reported drowned or missing in the waters between North Africa and Sicily. That compares with 529 in 2017, with 388 in 2016, five in 2015 and 314 in 2014. Through 18 July, 153 additional fatalities have been recorded on this route. IOM’s Missing Migrants Project has documented the deaths of 1,490 men, women and children seeking to cross the Mediterranean in 2018 – more than half of those deaths since 1 June.
Most recently, at least 44 people died in a shipwreck 16 miles off the coast of Northern Cyprus. On 18 July, 103 survivors and the remains of 19 people were recovered from a sinking boat near Gialousa/Yeni Erenköy, on the Karpass peninsula, in Cyprus. According to survivors’ testimonies, an estimated 25 people remain missing. A search and rescue operation is ongoing.
IOM Libya's Christine Petré reported Thursday that on during this week (18 July) 156 migrants—122  men, 24 women and 10 children—were returned to Libyan shore by the Libyan Coast Guard. The majority were from Guinea, Sudan, Nigeria and Mali.
IOM doctors provided health assistance including to three pregnant women. Furthermore, she reported, the previous day (17 July) 164 migrants—93 men, 32 women, 39 children—were rescued from a rubber boat after having spent 48 hours at sea during an interception conducted 76 nautical miles off Al-Khums. The remains of one child were retrieved.
So far in 2018, 11,980 migrants have been returned to Libyan shore after attempting to reach Europe. IOM Libya also reported separately that the remains of two bodies (one man and one woman) were retrieved on 19 July) in Tajoura and Garaboli.
On 17 July, Spanish NGO Proactiva Open Arms recovered the remains of a young woman and a child from a damaged rubber boat 80 nautical miles off the coast of Libya. They also found one survivor, a young woman from Cameroon. They are expected to disembark in Palma de Mallorca, Spain on Saturday (21 July).

IOM Madrid’s Ana Dodevska reported Thursday that total arrivals at sea in 2018 have reached 18,653 men, women and children, irregular migrants who have been rescued in Western Mediterranean waters through 18 July. With these latest figures Spain is the Mediterranean’s most-sought destination for irregular migrants traveling by sea, surpassing Italy and Greece.

Additionally, nearly 3,000 more migrants (2,874 according to Spanish authorities) have attempted to enter Spain irregularly via the country’s African enclaves of Melilla and Ceuta.

As remarkable as Spain’s rise in irregular migration activity has been through 2018, even more important is its recent surge. Over the year’s first five months, a total of 8,150 men, women and children were rescued in Spanish waters after leaving Africa – an average of 54 per day. In the 48 days since June 30, a total of 10,503 have arrived – or just under 220 migrants per day (see charts below).

IOM Athens’ Christine Nikolaidou said Thursday that IOM learned of at least one incident over three days (16-18 July) requiring a search and rescue operation off the island of Kos. The Hellenic Coast Guard rescued a total of nine migrants and transferred them to that island. At least 39 more migrants landed at Kos without assistance from the Coast Guard over these same three days.

Moreover, another 214 migrants were reported landing without Coast Guard assistance at Chios, Samos and Lesvos – bringing to 262 the total number of arrivals during those days. Through 18 July, the total number of sea arrivals to Greek territory since 1 January is 14,940. Worldwide, IOM’s Missing Migrants Project has documented the deaths of 2,240 people while migrating in 2018 (see chart below).
In addition to Mediterranean deaths, MMP reported that on the Niger-Algeria border, IOM Niger reported that two migrants died in the desert after being repatriated from Algeria. IOM staff stationed in Assamaka, Niger found the remains of two Nigerien men on 16 July. They were found under some car remains where they had taken cover.
On the US-Mexico border, US Border Patrol officers found four migrants with signs of dehydration in a ranch west of Laredo, Texas on 15 July. Tragically, one of them, a Mexican national, passed away before reaching the hospital. Additionally, the Missing Migrants Project team also recorded the death of another Mexican national earlier in July, who drowned in the All-American Canal near Calexico, California on 6 July.
Missing Migrants Project data are compiled by IOM staff but come from a variety of sources, some of which are unofficial. To learn more about how data on migrants’ deaths and disappearances are collected, click here.