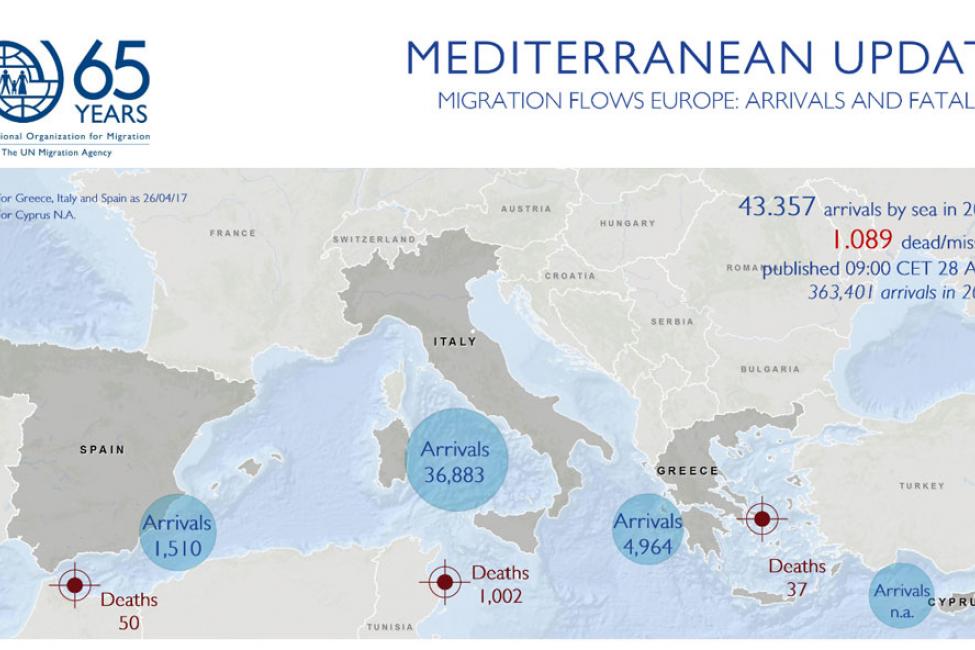 Switzerland - IOM, the UN Migration Agency, reports that 54,715 migrants and refugees entered Europe by sea in 2017 through 17 May, with nearly 85 per cent arriving in Italy and the remainder divided between Greece, Cyprus and Spain. This compares with 189,950 arrivals across the region through 17 May 2016.

IOM Rome reported that, through 17 May this year, 45,754 migrants or refugees have landed in Italy, and over 8,500 – or nearly one fifth of this year’s total – have arrived over the past two weeks. (See chart below.) The mission added that 2,179 migrants were saved Thursday by rescue ships, including the NGO ships of MOAS, SOS Mediterranée, Sea-Eye and Proactiva Open Arms. Those rescued have not yet landed in Italy so are not included in this month’s total.
Although not yet added to the Missing Migrants Project data base, IOM Libya’s Christine Petré reported Thursday that the remains of six migrants have been retrieved by Libyans since Tuesday. On 16 May, the remains of a female were retrieved in Sabratha by members of the local community. That same day, the remains of one man and one woman were retrieved in Az Zawyiah by the Libyan Red Crescent. Petré added that on Wednesday (17 May), two bodies were retrieved as well as one more victim discovered the day before (16 May). All three were found in Tripoli.
On Thursday 117 migrants were rescued (102 men, 11 women and four children) off Garaboli, east of Tripoli, and were taken to Abu Salim detention centre in Tripoli, Petré said. That brings the total number of those rescued off Libya this year to 5,445, while the count of dead migrants discovered in Libya is 224.
IOM Athens said this week Greek authorities have reported new arrivals of 167 migrants and refugees since Monday (15 May), more than half of those to the island of Chios. The IOM mission in Greece also released data received from the Hellenic Coast Guard regarding the nationalities of all sea-borne arrivals this year of irregular migrants sailing from Turkey (see chart below) through the end of April.

Of 5,137 migrant arrivals during the first four months of this year, just over half came from two countries: Syria (with 1,891 arrivals) and Iraq (706). Greek authorities reported over 345 arrivals from the Democratic Republic of the Congo, the third most common nationality, more than Afghanistan (316), Pakistan (267) and Iran (132), each of which sent thousands of migrants along this route in both 2015 and 2016.
One surprise: citizens from countries as far away as Algeria (with 229 arrivals), Kuwait (170) and Cameroon (129) appear to be seeking passage to Europe via a corridor that previously saw migrants passing through mainly from countries – such as Mali, Nigeria, Ghana, Ethiopia and Eritrea – whose citizens appear now to have abandoned this route.
This suggests that although Syrians and Iraqis – especially from each country’s Kurdish population – continue to rely on nearby Turkey to escape violence in their homelands, many others are treating Turkey as a place to access a clandestine route they can reach via regular travel means. One aspect that has not changed: migrants leaving the Caribbean island shared by the Dominican Republic and Haiti continue to try to enter Europe from Turkey using the Eastern Mediterranean’s irregular routes. Through April, 45 citizens from the Dominican Republic arrived in Greece by sea, with another 10 coming from Haiti.
Worldwide, the IOM Missing Migrants Project (MMP) reports that there have been 1,924 fatalities through 17 May (see chart below) with the Mediterranean region accounting for the largest proportion of deaths – about two thirds of the global total. Besides over a dozen more victims missing in Mediterranean waters this past week, IOM’s Missing Migrants Project added one Haitian man drowned off the coast of Eleuthera Island, Bahamas, another victim drowned in the Rio Bravo and one missing person in the Gibraltar Strait, off the coast of Tangiers, Morocco.

Earlier this month (7 May), Missing Migrants Project noted that fatalities across the Americas surpassed 200 men, women and children – the earliest that total had been reached in the three years MMP has been recording such data. In 2016, the 200-deaths threshold was reached on May 30, and in 2015 not until July 31.

This year the deaths – almost entirely of US-bound migrants crossing Mexico by land or the Caribbean by sea – include citizens of the following countries: Haiti (70 dead), Honduras (16), Dominican Republic (12), El Salvador (5), Mexico (4), Guatemala (3), Brazil (2), Peru (2) and Nicaragua (1).
Missing Migrants Project researcher, Julia Black, based in Berlin, noted: “More drownings have taken place this year. For the period 1 January–17 May 2017, 124 migrants drowned in the Americas, compared to 30 drownings for the same period last year (and 54 drownings for the same period in 2015).”
She explained this is mainly due to three large incidents in the Caribbean (68 Haitians drowned off the shores of Turks and Caicos in January; 12 Dominicans drowned on their way to Puerto Rico in February and 8 more in April). She noted the number of drownings in the Rio Bravo (Rio Grande) between the US and Mexico also had doubled: 34 drownings from 1 January to 17 May 2017, compared to 17 drownings for the same period last year.
Meanwhile 2017 has witnessed fewer vehicle and train incidents. For the period 1 January–17 May 2017, 10 train incidents and 7 vehicle incidents led to the death of migrants. That compares with 18 train and 16 vehicle incidents for the same period last year.
IOM’s Black added: “Missing Migrants Project data represent only a minimum estimate of deaths during migration each year. It is very likely that the real number of migrant deaths and disappearances is higher than what is reflected by these figures. Data collection in Latin America and the Caribbean relies largely on media reports, which are often incomplete and frequently do not specify the migratory status or nationality of the deceased.”
Remains of 88 “unknown” nationals have been recorded – or 43 per cent of the America’s total thus far in 2017. That proportion compares with 33 per cent of last year’s total, when the nationalities of 249 victims – from a total of 720 fatalities – went undetermined. Thanks to forensic autopsies and DNA matches, many “unknown” victims later were identified, so this percentage tends to diminish over time.
One recent example: 28-year-old María Dolores Borja Cabrera, whose remains were discovered on a ranch in Brooks County, Texas, in late May 2013. The Ecuadorian, whose remains were only identified last October, left behind a 10-year-old daughter.
For the latest Mediterranean Update infographic:
http://migration.iom.int/docs/MMP/190517_Mediterranean_Update.pdf