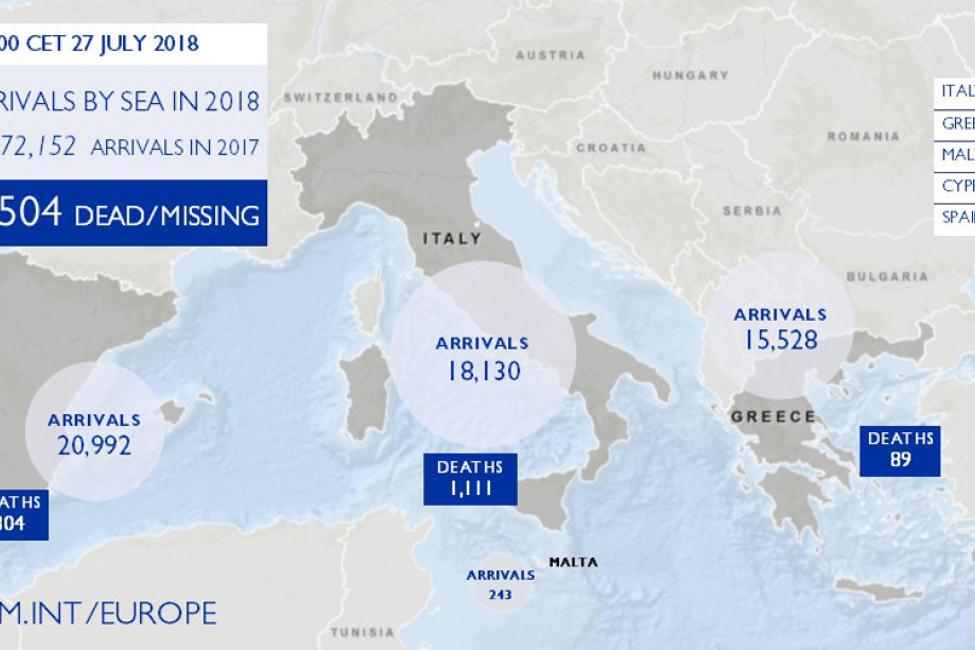 Geneva – IOM, the UN Migration Agency, reports that 55,001 migrants and refugees entered Europe by sea through 25 July 2018. That total compares to 111,753 at this time last year, and over 250,000 at this time in 2016.
Arrivals to Spain (see chart below) this month have overtaken those to Italy. To date just over 38 per cent of all Mediterranean irregular migrants have come via the Western Mediterranean route, whose irregular migration volume has more than tripled those registered at this time last year.

Arrivals to Italy trail Spain by almost 3,000; a week ago the gap was less than 200. Greece counts about 28 per cent of all arrivals. Significantly, Greece’s arrivals thus far in 2018 are running more than 5,000 ahead of last year’s totals on this date, an increase of better than 50 per cent.

Arrivals to Italy, on the other hand, are down over 80 per cent compared to 2017.

IOM’s Missing Migrants Project has documented the deaths of 1,504 men, women and children seeking to cross the Mediterranean in 2018 – more than half of those deaths since 1 June.

Most recently IOM’s Missing Migrants Project has documented the deaths of 10 people who went missing in the Western Mediterranean. On 24 July, 32 survivors were rescued from a sinking boat by the Moroccan Navy after more than two days at sea. According to their testimonies collected by Spanish NGO Caminando Fronteras, 10 people drowned before they were rescued.

Deaths in the Western Mediterranean in recent months have reached devastating levels, with 304 fatalities recorded by the Missing Migrants Project between January and 25 July 2018, far outpacing the 124 recorded in the equivalent period of 2017 – and the 224 recorded as drowned or missing during all of last year.

IOM notes the passing of the 1500th Mediterranean fatality in 2018 – which occurred this past week – marks the fifth consecutive year that sad benchmark has been reached. Despite the steep drop in the volume of all arrivals across the region, 2018 remains one of the deadliest on record – on a per capita basis – simply because so many fewer crossers are being recorded. IOM Libya’s Christine Petré reported that on Wednesday (25 July) the remains of two migrants were retrieved (two men of African descent) in Tajoura.  She noted that same day 31 migrants (all men, including one boy) received medical and protection assistance as they were disembarked by the Libyan Coast Guard. The migrants had been lost at sea for over more 12 hours without water and food after embarking on a small rubber boat in Sabratha. Two migrants originated from Ghana and the rest are from Bangladesh. Following humanitarian assistance, all were transferred to Trig al Seka detention centre.

So far this year, 12,162 migrants have been returned to Libyan shore, Petré said.

IOM Libya’s Petré reported on two sets of Voluntary Humanitarian Return charters completed from Libya in the past 10 days. On 17 July, IOM assisted 136 stranded migrants to return home on one chartered flight (127 migrants) to Mali and nine migrants returning on three commercial flights to Sierra Leone (1), Ghana (4) and Burkina Faso (4).

On 24 July, IOM assisted 166 stranded migrants to return home on one chartered flight (159 migrants) to Mali and seven migrants on two commercial flights to Algeria (5) and Ethiopia (2) including four medical cases and two unaccompanied migrant children.

IOM Madrid’s Oussama El Baroudi reported Thursday that total arrivals at sea in 2018 have reached 20,992 men, women and children, irregular migrants who have been rescued in Western Mediterranean waters through 25 July—or over 1,400 arriving since IOM’s last report on Monday, 23 July. With this month’s figures Spain is the Mediterranean’s most-sought destination for irregular migrants traveling by sea, surpassing Italy and Greece.
El Baroudi also shared preliminary overview from Spanish authorities on the top five groups entering Spain by sea from 1 January through 25 June. “Sub-Saharan Africans,” as one category, comprise the largest slice entering irregularly via Spanish waters in 2018. That category was followed, separately, by Guinea (Conakry), Morocco, Mali and Ivory Coast.
Additionally, 3,125 migrants have attempted to enter Spain irregularly via the country’s African enclaves of Melilla and Ceuta, according to Spanish authorities (see chart below). As remarkable as Spain’s rise in irregular migration activity has been through 2018, even more important is its recent surge. Over the year’s first five months, a total of 8,150 men, women and children were rescued in Spanish waters after leaving Africa – and average of 54 per day. In the 55 days since May 31, a total of 12,842 have arrived – or just over 230 migrants per day.

At this present rate, IOM believes irregular migrant arrivals by sea to Spain could well pass the total for all of last year – 22,108 – before this month’s end on Tuesday.

IOM Athens’ Christine Nikolaidou said Thursday that IOM has learned from the Hellenic Coast Guard (HCG) of at least at least three incidents from 23-25 July requiring search and rescue operations off the islands of Lesvos, Kos and Chios. The HCG rescued a total of 90 migrants and transferred them to those islands. Another 87 landed without intervention on Rhodes and Oinouses – bringing to 177 the total arrivals during those three days.

Through 25 July, the total number of sea arrivals to Greek territory since 1 January is 15,528. IOM's Balkans team reported Thursday an estimated 1,468 new irregular migrants have been apprehended by authorities in Bosnia and Herzegovina, Montenegro and Albania during July thus fasr in 2018—more than ten times the 134 registered in all of July 2017. In total, since the beginning of the year, there have been 12,735 apprehensions in the respective countries.
The majority of irregular migrants were registered in Bosnia and Herzegovina, a total of 9,056. According to the information received from IOM field teams, migrants are predominantly crossing to Bosnia and Herzegovina from neighbouring Serbia and to a lesser extent, from Montenegro. Their aim is to continue their journey towards EU countries. Therefore, migrants mainly are located in the North-Western part of the country in the areas around Bihać and Velika Kladuša. It is estimated that approximately 3,500 migrants currently are in the country.
Irregular migrants are also continuing to transit through Albania and Montenegro, where authorities registered a total of 3,679 individuals. Based on DTM flow monitoring data, there were 2,356 arrivals to Montenegro, over ten times the 226 reported between June and July 2017. In Albania, DTM field data collectors tracked 1,323 migrants—seven times the 178 registered at the end of the second quarter of 2017. In addition, authorities in Albania reported that 682 migrants were apprehended while trying to exit the country towards Montenegro.
Pakistan, Syrian Arab Republic, Iran, Afghanistan, Algeria and Iraq are the most common countries of origin declared by the migrants intercepted in all three countries between January and July 2018.
Worldwide, IOM’s Missing Migrants Project has documented the deaths of 2,291 people during migration to international destinations in 2018 (see chart below).
On the US-Mexico border, three people died in recent days while trying to cross into the United States. On 24 July, US Border Patrol officers responded to a distress call regarding two Mexican nationals, a father and son, who were lost in a ranch near Sullivan City, Texas. When they found them, they were taken to the local hospital, where the father died of cardiac arrest. On the same day, Mexican civil protection authorities recovered the body of a young man from the Río Bravo/Grande, near the first international bridge in Nuevo Laredo, Tamaulipas.
On 22 July, the remains of a Mexican woman were recovered from a ranch near Laredo, Texas. She died of dehydration shortly after crossing the border. Additionally, the Missing Migrants Project team received information from the Hidalgo County Sheriff’s Office regarding remains recovered in Hidalgo County, Texas, in the first half of 2018. The remains of 17 migrants have been retrieved by Sheriff’s deputies along highways, on ranches or in the river between 1 January and 30 June 2018.
In North Africa, an Egyptian man was shot at the Al-Baydan security checkpoint south of Ajdabiya, Libya on 24 July.
Missing Migrants Project data are compiled by IOM staff but come from a variety of sources, some of which are unofficial. To learn more about how data on migrants’ deaths and disappearances are collected, click here.