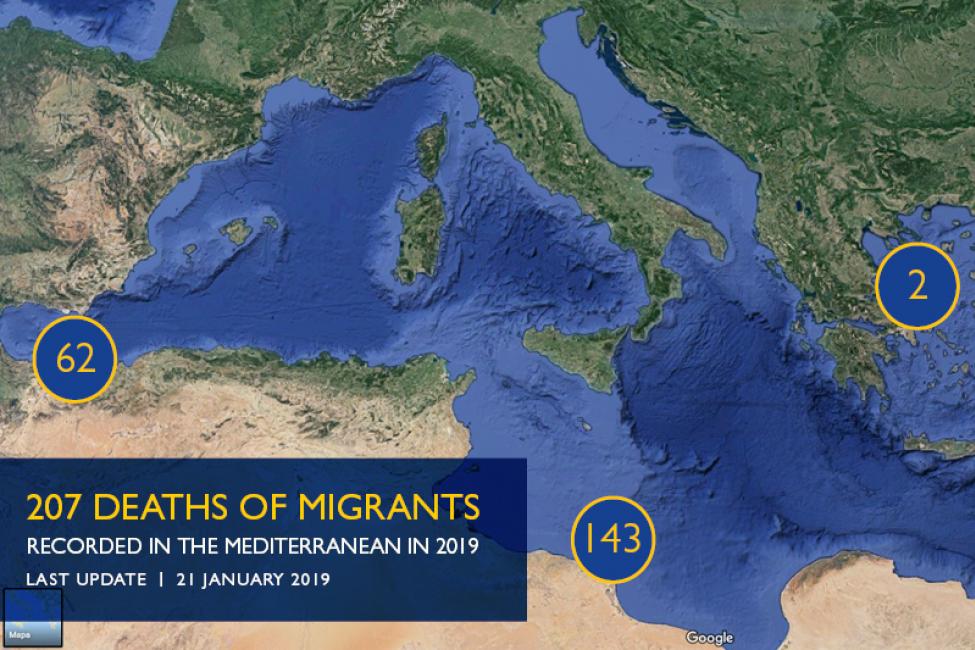 Geneva – IOM, the UN Migration Agency, reports that 5,757 migrants and refugees have entered Europe by sea through the first 27 days of 2019, a slight increase over the 5,502 arriving during the same period last year. Deaths on the three main Mediterranean Sea routes through almost four weeks of the new year are at 207 individuals, compared with 242 deaths during the same period in 2018.

IOM Rome’s Flavio Di Giacomo on Monday reported that the NGO ship “Sea-Watch 3,” which rescued 47 migrants last Saturday (19 January), is now in Italian waters – about one mile off the coast of Siracusa, Sicily, as of Friday night. The vessel had yet to receive authorization to land.

Di Giacomo called the situation “very critical, given the difficult winter period with low temperatures and rough seas and the fact that the ship is not sufficiently equipped to host people for so many days on board.” He added: “The space inside is insufficient, and some people are forced to remain outside on the bridge.”

IOM also has learned that many of the migrants on board reported both to the “Sea-Watch 3” crew and to visiting members of the Italian Parliament, who also boarded, that they had been victims of abuse and violence during their stay in Libya.

Di Giacomo noted that among the vessel’s passengers are 13 unaccompanied minors, whose condition is of particular concern. He said adequate protection and safeguarding measures must be taken for them as soon as possible, in line with international conventions.

IOM’s Federico Soda, Director of the IOM Coordination Office for the Mediterranean, noted that the denial of a safe port to vessels that have rescued migrants in distress is reoccurring and an indication of a deteriorating situation in the Mediterranean. “It is increasingly urgent that, in order to put an end to this current ad hoc approach to life-saving operations, all Mediterranean countries start working together to establish a safe and orderly disembarkation mechanism,” he explained. IOM Greece’s Antigoni Avgeropoulou said on Monday (28 January) that from Friday (25 January) to Monday, the Hellenic Coast Guard (HCG) reported at least two incidents requiring search and rescue operations off the islands of Farmakonisi and Chios. The HCG rescued a total of 80 migrants and transferred them to those islands.

Those 80 arrivals were among some 111 IOM recorded in the four days between 24 and 27 January arriving at the islands of Farmakonisi, Lesvos and Chios and bringing to 1,660 the total number of sea arrivals to Greece this year (see chart below).

So far in 2019, Missing Migrants Project has recorded the deaths of 226 people, 207 of those on one of three Mediterranean Sea routes.

Most recently, two young Algerian men lost their lives in the Western Mediterranean. It is believed they left from Spain’s North African enclave Ceuta with two others on 14 January. They left in a small inflatable boat without an engine. The four Algerians have been residing at Ceuta's Temporary Residence Centre, where many migrants are detained after attempting to reach the European mainland via Spain. After several days at sea, the boat in which the four men were travelling started taking on water.

The Spanish Guardia Civil was able to rescue two of the men and brought them back to Ceuta, but the others remained missing. Their bodies washed up on Algerian shores a few days later: on 21 January, the remains of one were found near Béni-Saf, in the Algerian province of Ain Témouchent; on 24 January, the body of the other missing man washed up on El Ain beach, in the same province.

A few days before, on 22 January, the body of a 40-year-old woman had washed up on Bahara beach, in Algeria’s province of Mostaganem – this appears to be an unrelated incident.

In the Central Mediterranean, Médecins Sans Frontières (MSF) reported that 106 migrants had disembarked in Khoms from a commercial ship on 21 January. An MSF team was present during their disembarkation and reported that a 15-year-old boy died in the hospital, shortly after being taken from the ship.

Elsewhere, Missing Migrants Project documented the deaths of four people crossing the Río Bravo that makes up the Texas-Mexico border.

On 22 January, an unidentified man was swept away by currents of the Río Bravo while he tried to cross from the Mexican town of Nuevo Laredo into Texas. On 23 January, US Border Patrol agents retrieved the body of a man near Minas del Seco, in Maverick County. A day later, Mexican civil protection authorities found the body of a man near the municipality of Reynosa Díaz, in Mexico’s northern province of Tamaulipas. On Saturday, 26 January, the remains of another man, believed to be of Ukrainian nationality, were recovered from the Río Bravo near La Playita, Reynosa, Mexico.

In Ciudad Juárez, Mexico, a 24-year-old Guatemalan woman and her son, who was five years old, were killed in a car crash on 24 January. She was eight months pregnant when she died. In Mexico’s southern province of Veracruz, a 40-year-old man from El Salvador died in a hospital in Oluta on 21 January, from the injuries he sustained after falling from a freight train. On 24 January, a man who was travelling on top of a freight train was killed after falling from the cargo train near San Mateo Ixtacalca, Cuautitlán, Mexico.

Late Monday MMP received reports of a shipwreck near Capurganá, Colombia, from which between 20 and 27 migrants were said to be missing. Initial reports were that the victims were African, identified as “from the Congo.” Media in the region indicate several survivors have been found but no bodies after a small motorboat foundered in the waters linking Colombia to Panamá. Missing Migrants Project data are compiled by IOM staff based at its Global Migration Data Analysis Centre but come from a variety of sources, some of which are unofficial. To learn more about how data on migrant deaths and disappearances are collected, click here.