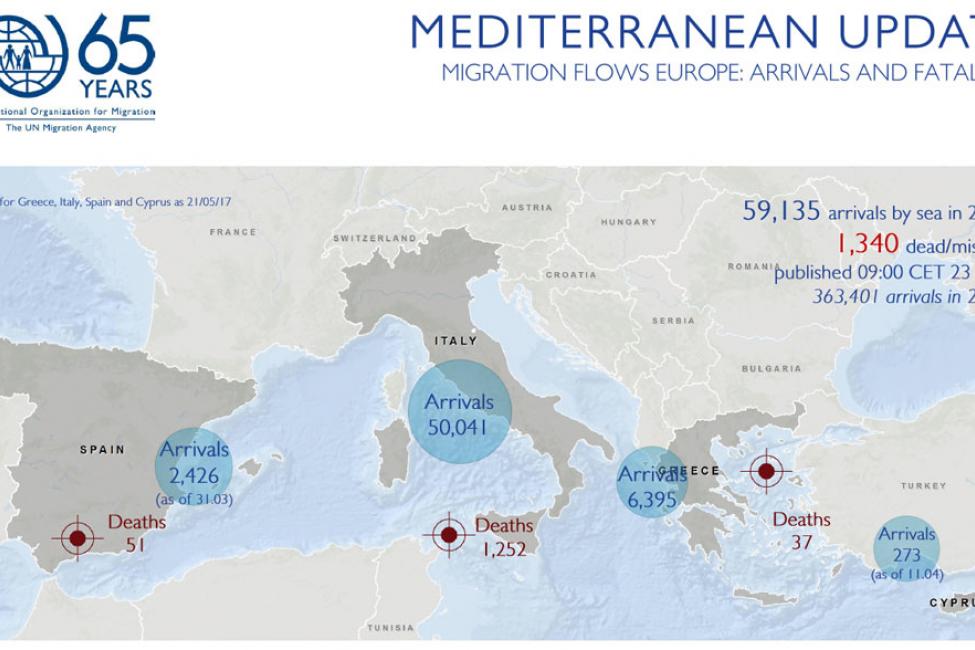 Switzerland - IOM, the UN Migration Agency, reports that 59,135 migrants and refugees entered Europe by sea in 2017 through 21 May, with over 80 per cent arriving in Italy and the remainder divided between Greece, Cyprus and Spain. This compares with 190,977 arrivals across the region through 21 May 2016.

IOM Rome reported that, through 21 May this year, 50,041 migrants or refugees have landed in Italy (See chart below).

IOM spokesperson Flavio Di Giacomo reported Monday that over 4,000 migrants arrived in Italy since IOM’s report last Friday. On Monday, the Italian Coast Guard’s Diciotti ship brought to land the corpse of one Western African migrant. Survivors from one rescue operation reported that another migrant went missing at sea after falling from a dinghy. Although not yet added to the Missing Migrants Project data base, IOM Libya’s Christine Petré reported that on Monday, 22 May, the remains of two men were retrieved in Al Maya between Az Zawiyah and Janzour in the western part of Libya. The total number of bodies retrieved so far in 2017 is 226 and the total number of rescued migrants is 5,897.

On Saturday (20 May) 96 migrants – 82 men, 10 women and four children – were rescued at sea off Az Zawiyah. The migrants were of mixed nationalities including some from Bangladesh and several African countries.

IOM Athens said yesterday (22 May) that Greek authorities reported new arrivals of 133 migrants and refugees between Thursday (18 May) and Sunday (21 May). Since 1 January, a total of 6,395 sea-borne arrivals of irregular migrants have reported at various Greek islands.

Worldwide, the IOM Missing Migrants Project (MMP) reports that there have been 1,933 fatalities through 17 May (see chart below) with the Mediterranean region accounting for the largest proportion of deaths – about two thirds of the global total.

Since last week, MMP has recorded eight deaths in the Central Mediterranean (although six of these occurred on 16-17 May). Two others include one dead and one missing reported by IOM Rome from rescue missions last Friday (19 May). MMP also recorded the death of a migrant electrocuted on a train in Cannes.