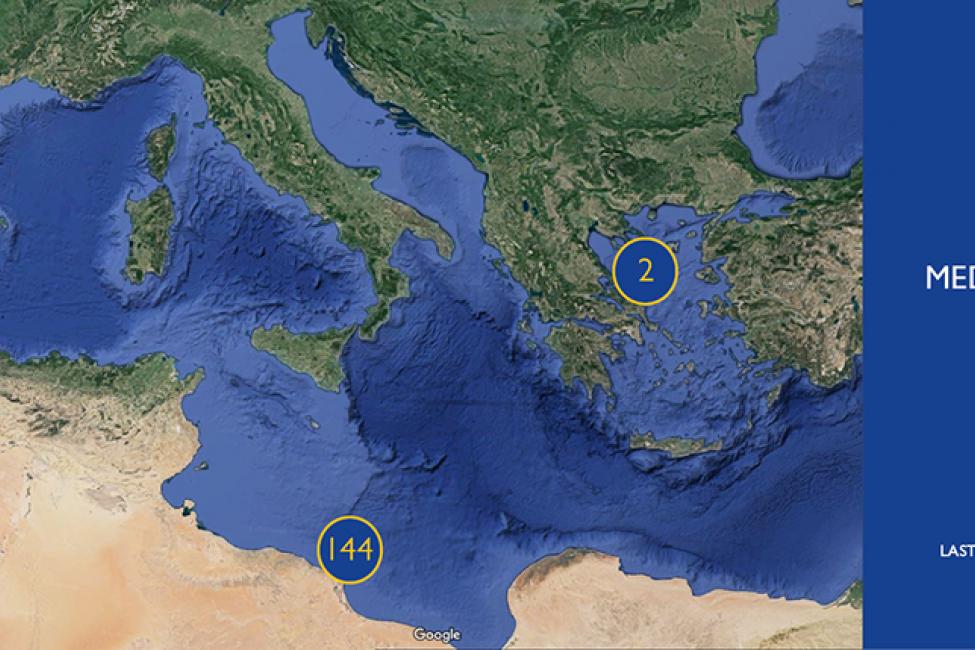 Geneva – IOM, the UN Migration Agency, reports that 5,989 migrants and refugees have entered Europe by sea through the first 30 days of 2019, a slight decrease from the 6,550 arriving during the same period last year. Deaths on the three main Mediterranean Sea routes through just over four weeks of the new year are at 208 individuals, compared with 243 deaths during the same period in 2018. (See chart 1). So far in 2019, the Missing Migrants Project (MMP) has recorded the deaths of 308 people (see chart below).

On the Mediterranean, MMP received confirmation Thursday about an incident from 21 January, when 106 people who had been intercepted at sea by the Libyan Coast Guard were disembarked in Al Khoms, Libya. According to survivors’ testimonies, one Somali man drowned at sea before they were intercepted. His remains were not recovered.  That brings to 208 the total number of fatalities on the Mediterranean through 30 January, or two thirds of the worldwide total.

Elsewhere this week, dozens of men and women are feared drowned in two shipwrecks in the Red Sea’s Strait of Bab el-Mandeb, off the coast of Obock, Djibouti. The number of people who were travelling on the two capsized boats is unknown. The boats had left from the locality of Godoria, in northeast Djibouti, with the aim of reaching the Arabian Peninsula, and capsized shortly after departing, as they were heavily overloaded.

Fifteen survivors have been rescued during a search and rescue operation by the country’s coast guard, and the remains of 52 people had been recovered. Many more are thought to be missing at sea.

In 2018, at least 156 people are known to have drowned in attempts to get to Yemen, mainly from the Horn of Africa, an increase compared to the 111 migrants estimated to have died in 2017 on this route. Reports of the increasingly cruel measures adopted by smugglers, such as overcrowding of boats and forced disembarkation in deep waters, seem to account for the increase in deaths at sea. The largest single loss of life last year was on 6 June 2018, when 62 people drowned in the Gulf of Aden off the coast of Yemen.

On the Caribbean, near the sea border shared by Colombia and Panamá, another shipwreck caused the lives of at least 24 people on 28 January. Eight survivors, nationals of the Democratic Republic of the Congo, were rescued off the coast of Capurganá, municipality of Acandí, in Colombia’s northern province of Chocó. According to their testimony, 32 people were travelling on the boat – including 14 children – with the aim of reaching the border with Panamá to continue their journey north. As of Thursday (30 January), the Colombian Navy had recovered the remains of 12 people, including those of seven children. An estimated 12 people are thought to be missing.

On the Río Bravo, where the border brings Texas together with the Mexican States of Tamaulipas and Coahuila, the remains of two young Mexican men were recovered from the river on 28 January. Their families had reported them as missing on 12 January, when they attempted to cross the border into the US. The remains of another man who was travelling with them have not yet been located.

Two train-related accidents were recorded in Mexico. A 30-year-old Honduran man died after falling from a cargo train near Sayula de Alemán, in Mexico’s southern state of Veracruz on 28 January. Another Honduran man was killed near El Derramadero, in Coahuila on the same day. He fell from a train covering the line between Mexico City and Nuevo Laredo, a city on the border with the US.  These two deaths represent the fourth and fifth fatalities from train accidents this month. MMP reported 40 such fatal accidents in 2018. (See chart 3b).

Missing Migrants Project data are compiled by IOM staff based at its Global Migration Data Analysis Centre (GMDAC) but come from a variety of sources, some of which are unofficial. To learn more about how data on migrant deaths and disappearances are collected, click here.