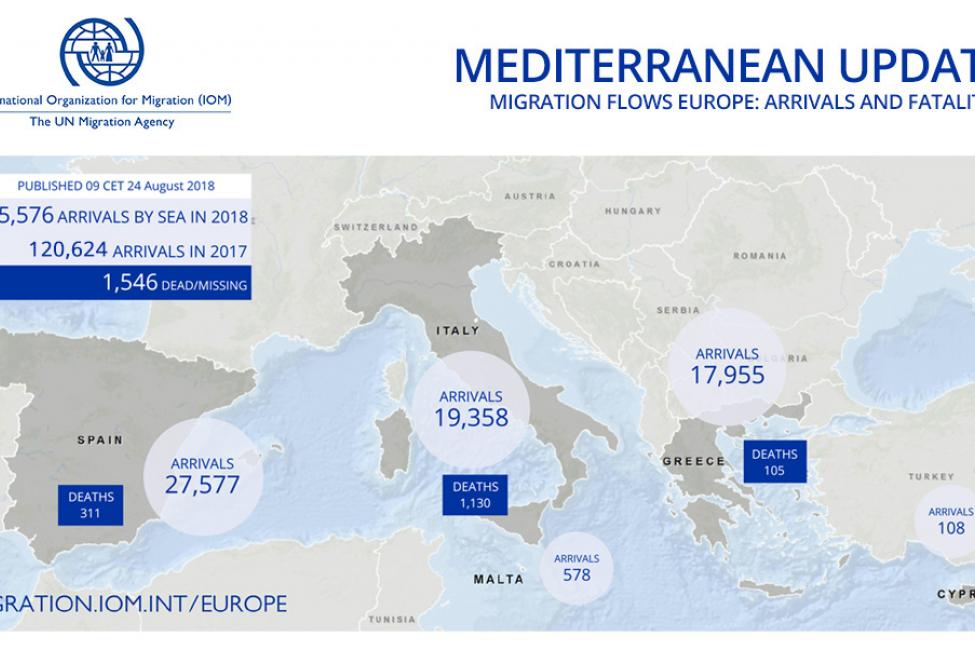 Spain, with 42 per cent of all arrivals through the year, continues to receive seaborne migrants in August at a volume more than twice that of Greece and more than six times that of Italy. Italy’s arrivals through late August are the lowest recorded at this point of a normally busy summer season in almost five years (see chart below).

IOM Rome on Thursday joined UNHCR in an appeal to the Government of Italy to allow rescued refugees and migrants on board the Italian coast guard vessel Diciotti to disembark.

IOM Rome’s Flavio Di Giacomo said several vulnerable people – including 17 persons in need of medical care and 27 unaccompanied children – already have been allowed to leave the vessel on humanitarian grounds. Some 150 passengers – all adults – currently remain on board the Diciotti, which has been docked in the Sicilian port of Catania since 20 August.

While welcoming the decision by Italy to allow some of the most vulnerable passengers to disembark, IOM notes it remains crucial to allow everyone remaining on the vessel to come ashore as their humanitarian needs cannot be fully met on board.

“Migrants arriving from Libya are often victims of violence, abuses and torture, their vulnerabilities should be timely and properly identified and addressed,” added Federico Soda, Director of IOM’s Coordinating Office for the Mediterranean, and Chief of Mission for Italy and Malta.

In recent months, UNHCR and IOM have called for a regional arrangement for rescue and disembarkation of passengers in distress on the Mediterranean Sea.

IOM’s Missing Migrants Project has documented the deaths of 1,546 people on the Mediterranean in 2018. Most recently, an estimated 11 people lost their lives in the Central Mediterranean in two separate incidents. On 20 August, a boat carrying 10 Tunisian migrants capsized off the coast of Djerba, in the Médenine Governorate. Only one survivor was found alive by the Tunisian National Guard, while the remains of six others were retrieved over the next few days. Three people remain missing. On 22 August, the Armed Forces of Malta rescued 100 people and recovered two bodies from a boat found 68 nautical miles south of Malta.

IOM’s Christine Petré reported that late Wednesday night (22 August), 25 migrants (21 men, three women and one child) received food and water, as well as medical and protection assistance as they were disembarked by the Libyan Coast Guard. The migrants had embarked in Azzawiyah on a rubber boat with the majority coming from Bangladesh, as well as from Sudan, Ghana, Niger, Cameroon, Mali and Côte d’Ivoire.

The previous night (21 August), another 138 migrants (111 men, 14 women and 13 children), a majority from Sudan, who had embarked on a rubber boat in Garaboli were returned by the Libyan Coast Guard. Because of the Eid holiday, all migrants were immediately transferred to a detention centre. IOM is following up with assistance in the centre.

So far this year, 12,998 migrants have been returned to Libya.

IOM Spain’s Ana Dodevska reported that total arrivals at sea in 2018 have reached 27,577 men, women and children who have been rescued in Western Mediterranean waters through 22 August. She cited media reports that 200 migrants crossed the fence into Spain’s Ceuta enclave Wednesday, bringing to 4,382 the total number of arrivals by land by irregular migrants in 2018 (see charts below). IOM notes that over this year’s first five months, a total of 8,150 men, women and children were rescued in Spanish waters after leaving Africa – an average of 54 per day. In the 83 days since 31 May, a total of 24,858 have arrived – or just under 300 migrants per day. The months of May-August this year have seen a total of 28,380 irregular migrants arriving by sea, the busiest four-month period for Spain since IOM began tallying arrival statistics, with just over one week left in August.

On Thursday, IOM Athens’ Christine Nikolaidou reported that over three days (20-22 August) this week, the Hellenic Coast Guard (HCG) units managed at least two incidents requiring search and rescue operations off the islands of Lesvos and Kos. The HCG rescued a total 69 migrants and transferred them to those islands.

Additional arrivals to Samos, Kos and Lesvos of some 246 men, women and children brings to 17,955 the total number of arrivals by sea to Greece through 22 August (see chart below).

Almost 16,000 migrants have been registered between January and the second half of August in the countries along the Western Balkans route leading from Greece to Albania, Montenegro and Bosnia and Herzegovina.

Seventy-three per cent of all irregular migrants were registered in Bosnia and Herzegovina, a total of 11,589 in the period between January and 19 August 2018. There are estimated 550 registered arrivals on a weekly basis on average  since March 2018 when an increase in arrivals to the country was observed. Due to the increased border controls with the neighboring EU member states, migrants have limited options for continuing their journey towards Western Europe. This lead to the increase of migrants present in the country, especially in the Una-Sana County in the North Western part of the country. Based on the field reports from IOM staff, there are estimated 5,000 migrants currently staying in different unofficial and official sites in this region.

The remaining 4,148 irregular migrants were registered by the authorities in Montenegro and Albania, mainly in Montenegro where between January and 15 August 2018 reported 2,744 new arrivals. At the end of the second week of August there were estimated 253 migrants and asylum seekers accommodated in the country.

Authorities in Albania registered 1,404 on entry to the country, in Southern Gjirokastra region neighboring Greece. According to the field reports, majority of migrants were returned to Greece, therefore only few migrants decided to stay in Albania and seek for asylum. As of 15 August, estimated 20 asylum seekers and migrants were reported residing in the official reception facilities. Further on, DTM is implementing flow monitoring activities in the north of the country since March 2018. Collected data shows that 810 migrants were intercepted in Shkodra region while trying to exit the country towards Montenegro. Almost all migrants who are intercepted in the Western Balkans have arrived to Europe from Turkey as this is the main departure point for all registered arrivals to Greece. However, available DTM flow monitoring data on arrivals to Italy indicated that 9% of registered arrivals to Italy this year, departed from Turkey, with Antalya, Izmir, Bodrum being the main departure locations. Based on field reports from IOM colleagues in Italy, boats sailing from Turkey disembark in Calabria and Apulia, and some of them even reach Sicily. Majority of migrants who used this route declared being from Pakistan, Afghanistan and Iran. Some boats sail directly from Turkey to Italy while others stop in Greece to embark other migrants. However, North African countries, especially Libya (62%) and Tunisia (17%) are still the first departure points for migrants who seek for better life on the European soil.

In addition to the recent Mediterranean drownings, MMP reported that on the US-Mexico border, the remains of five people were retrieved between 17 and 21 August. US Border Patrol agents recovered the remains of a deceased individual from a water basin near Mercedes, Texas on 17 August. Two days later, on 19 August, two people drowned in a canal near La Joya, Texas. On the same day, the body of a 50-year-old Mexican man was found in a ranch in Dimmit County, Texas. On 21 August, US Border Patrol agents found the remains of another individual in a ranch in Kenedy County, Texas.

The Missing Migrants Project team also recorded two deaths in South America. On 10 August, a 5-year-old girl, believed to be Nigerian, died of hypothermia near the Rumichaca International Bridge, on the Colombia-Ecuador border. In July, a Venezuelan woman died of hypothermia while crossing the Andes into Colombia, on the road between Cúcuta and Bucaramanga near Berlín, in the province of Santander.