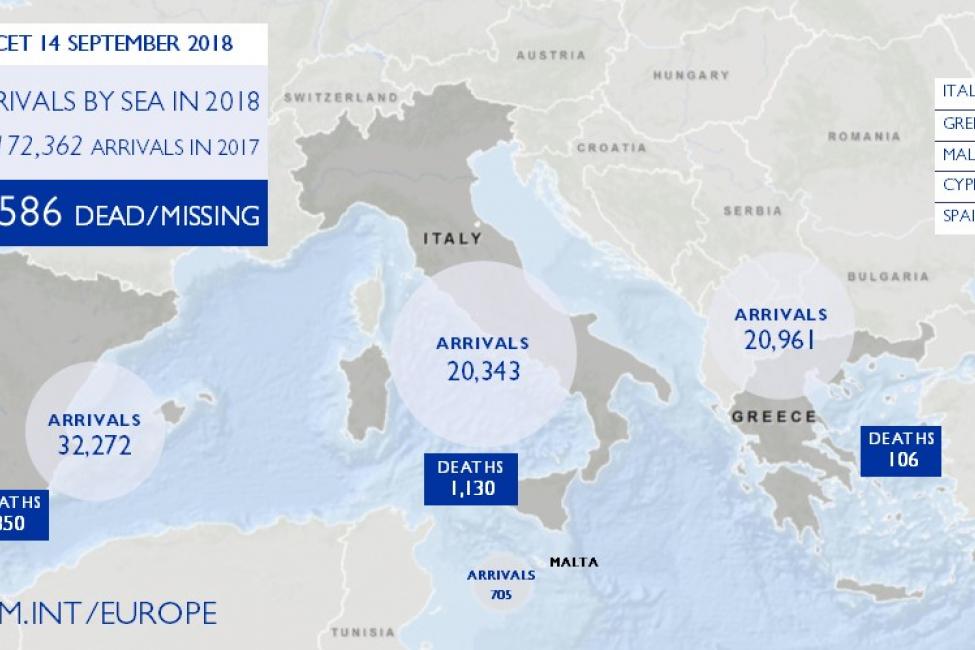 Spain, with over 43 per cent of all irregular arrivals on the Mediterranean through this year, has outpaced Greece and Italy throughout the summer. Italy’s arrivals to date – 20,343 – are the lowest recorded by IOM since 2014, lower in fact, than arrivals recorded by Italian authorities during many individual months over the past five years. The same can be said for Greece, whose totals for irregular migrant arrivals through the first week of September this year (20,961) recently surpassed arrivals to Italy. It is the first time that has happened since the early spring of 2016. IOM’s Missing Migrants Project has documented the deaths of 1,586 men, women and children on three Mediterranean crossing points. Most recently, at least 21 people died or went missing when attempting to reach Spain via the Western Mediterranean.

On 4 September, the remains of nine people from Sub-Saharan Africa washed up on a beach near Marsa Ben M’Hidi, in Algeria’s province of Tlemcen, near the Moroccan border. The distance to the Spanish coast from this area is only 200km.

The following day (5 September), four more bodies were recovered on the neighbouring beach of Saïdia, in Morocco, across the border from Marsa Ben M’Hidi.

On 10 September, the remains of six migrants – among them two women and one child – washed ashore at Driouch, near Nador, Morocco. Their remains were taken to the morgue of Nador’s Hassani Hospital and are awaiting identification.

On the opposite side of the Alboran Sea, the body of a woman was found at Las Salinas beach, in Roquetas de Mar, Almería on 11 September. The body of a young Sub-Saharan African man was retrieved by fishermen near La Almadraba, in the Spanish enclave of Ceuta, on 13 September. Those remains recovered over the last days are not connected to any known shipwreck.

Missing Migrants Project is investigating whether they are connected to reports of two boats that may have gone missing between August 30 and September 3 in the Alboran Sea, as reported by the NGO Alarmphone. Since the beginning of the year, 350 people have lost their lives in the Western Mediterranean.

Along the Central Mediterranean route IOM continues to investigate reports of dozens of lives lost on the route linking Libya to Italy on 1 September. IOM learned through tweeted reports of at least 100 lives lost at sea, but later learned of reports of a rescue in which two corpses were recovered, and 25 more migrants were reported missing. IOM has not confirmed the veracity of either report but hopes to have more complete information in the coming days.

IOM Italy released data Thursday on irregular arrivals from North Africa (see chart below) through nearly all of the first half of September. The 266 irregular migrants arriving through 12 September represent an average of just 22 per day – compared to averages of over 2,009 per day last September and 566 per day the September before that. According to IOM data collected during the current Mediterranean emergency, during peak summer months in 2016 and 2017, daily arrivals to Italy frequently surpassed 750.  Current arrival levels are around 3 per cent of those averages. IOM Italy’s Flavio Di Giacomo also reported Thursday that Italian authorities have released data on irregular migrants’ nationalities through the first eight months of 2018. Leading sender nations through August were Tunisia and Eritrea, both with over 3,00 arrivals this year, followed by Sudan, Nigeria, Pakistan, Iraq and Côte d’Ivoire – all with over 1,000.

The remaining leaders – each with over 800 arrivals – are Mali, Algeria and Guinea. It is important to note that all the Sub Saharan senders (Eritrea, Sudan, Nigeria, Mali, Côte d’Ivoire, Guinea) show sharp drops in total arrivals – in some cases by as much as 90 per cent from this time last year. Only Tunisia shows an increase from levels of 2017 (see chart below). IOM Spain’s Ana Dodevska reported Thursday that 32,272 irregular migrants have arrived by sea this year via the Western Mediterranean; of those, some 9,341 arrived in the 43 days since the start of August, a rate of 217 per day. For the first 12 days of September, irregular migration arrivals on the Western Mediterranean route were running at a rate of nearly 245 per day (see chart below). On Thursday, IOM Athens’ Atigoni Avgeropoulou reported that over three days (10-12 September) Hellenic Coast Guard (HCG) units carried out one operation requiring search and rescue off the island of Lesvos. The HCG rescued a total 71 migrants and transferred them to that island.

Additional arrivals of some 100 during those days to Lesvos, Rhodes and Kos bring to 20,961 the total number of irregular arrivals to Greece by sea in 2018. Moreover, IOM Athens reports, another 12,166 land arrivals have been recorded on the Eastern Mediterranean through the end of August, and an unknown number since 1 September. (see charts below). In the Western Balkans IOM’s Ivona Zakoska writes: Increased sea and land arrivals to Greece and the prolonged stay of migrants in various reception centres and other accommodation arrangements in transit countries have contributed toward an increase in secondary movement through the Western Balkans, specifically through Albania, Montenegro and Bosnia and Herzegovina.

According to available Displacement Tracking Matrix (DTM) flow monitoring data, more than 1,350 new migrants were registered arriving in the countries concerned in the first two weeks of September 2018, which is six times more than the average of 220 monthly arrivals reported in the three countries in 2017.

Between January and September, authorities in Albania, Montenegro and Bosnia and Herzegovina, registered a total of 18,038 irregular entries, a thirteen-fold increase compared to the 1,361 reported in the same period 2017, and eight times the 2,225 registered in the three mentioned countries in the whole of 2017.

According to the available information on nationalities, Pakistan, the Syrian Arab Republic, the Islamic Republic of Iran and Iraq are the most commonly reported origin countries. The distribution of migrants by nationality varies between the three countries on the route.

More than one third of all registered migrants in Bosnia and Herzegovina were from Pakistan, followed by those from the Syrian Arab Republic (18%) and Afghanistan (14%), the Islamic Republic of Iran (11%) and Iraq (9%).

In Montenegro and Albania, Syrian nationals comprised the majority (44% and 55% respectively), followed by those who arrived from Pakistan (18% and 10% respectively) and Iraq (7% and 8% respectively).

Such differences are explained by the fact that migrants in Bosnia and Herzegovina also enter from Serbia. Further on, since March 2018, DTM is monitoring outgoing flows from Albania to Montenegro in Shkoder region. According to available data there were 993 migrants apprehended while attempting to exit Albania irregularly.

Similarly, to the nationality breakdown of registered arrivals, outgoing flows are predominantly composed of migrants from the Syrian Arab Republic (41%) and Pakistan (32%). Between January and August 2018, there were 4,673 newly registered migrants in the reception centres across Serbia. This is almost twice the 2,897 registered in the same period last year, and slightly less than the 5,435 registered in the whole of 2017.

More than a quarter of all registered migrants in Serbia this year declared Afghan origin (28%), another 20 per cent were from Pakistan followed by 14 per cent of migrants from Bangladesh, 14 per cent from the Islamic Republic of Iran and 7 per cent of Iraqi nationals.

In the former Yugoslav Republic of Macedonia authorities reported the arrival of 2,361 irregular migrants, seven times more than the 319 registered between January and end of August 2018, and four times the 547 reported in the whole of 2017. More than half of the overall caseload were Iranian nationals (54%), followed by those from Afghanistan (11%), Pakistan (10%), Iraq (8%), Libya (6%) and the Syrian Arab Republic (4%).

IOM’s Missing Migrants Project has documented the deaths of 2,570 people during migration to international destinations in 2018 (see chart below). Globally, IOM estimates that more than 28,000 migrants have died since 2014.

Besides the Mediterranean, the MMP recorded that on the border between the United States and Mexico, US Border Patrol agents found the remains of a man who had died of dehydration in a ranch near Laredo, Texas on 3 September. That brings to 283 the number of border deaths through mid-September – a slight increase in deaths over the 261 recorded along the border at this time last year.

In Europe, an unidentified migrant died on 9 September when he was hit by a vehicle in the E40 highway, near Middelkerke, Belgium. The main continent of Europe has recorded the deaths of 68 migrants this year, mostly along highways and railroad crossings. Last year at this time MMP recorded just 43 migrant deaths inside Europe.