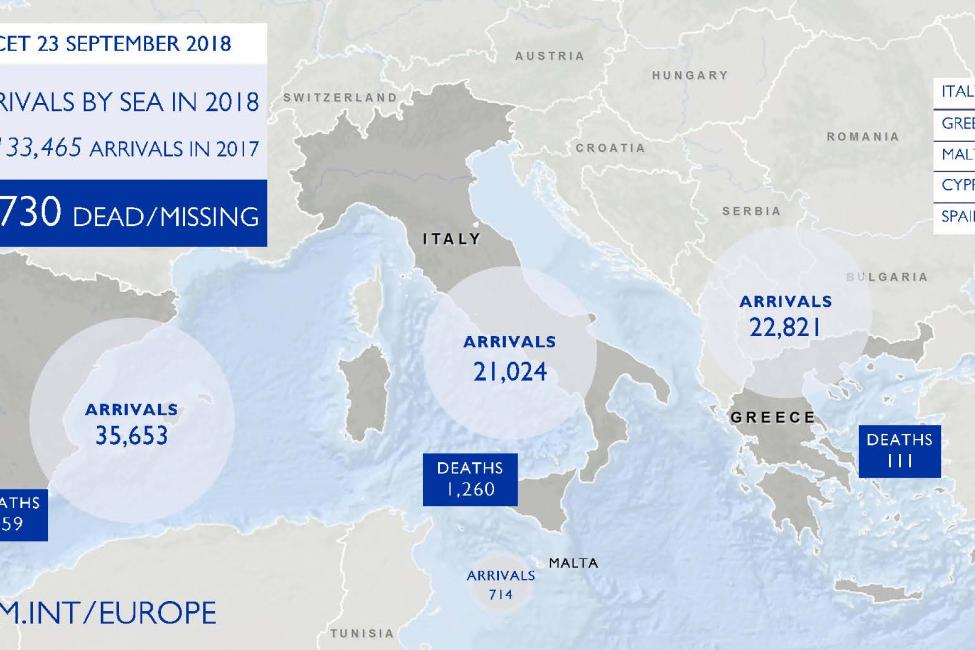 Geneva – IOM, the UN Migration Agency, reports that 80,602 migrants and refugees entered Europe by sea in 2018 through 23 September, with 35,653 to Spain, the leading destination this year. In fact, with this week’s arrivals Spain in 2018 has now received via the Mediterranean more irregular migrants than it did throughout all the years 2015, 2016 and 2017 combined.

The region’s total arrivals through the recent weekend compare with 133,465 arrivals across the region through the same period last year, and 302,175 at this point in 2016.

Spain, with 44 per cent of all arrivals through the year, continues to receive seaborne migrants in September at a volume nearly twice that of Greece and more than six times that of Italy. Italy’s arrivals through late September are the lowest recorded at this point – the end of a normally busy summer sailing season – in almost five years. IOM Rome’s Flavio Di Giacomo on Monday reported that Italy’s 21,024 arrivals of irregular migrants by sea this year represent a decline of nearly 80 per cent from last year’s totals at this time. (see chart below).

IOM’s Missing Migrants Project has documented the deaths of 1,730 people on the Mediterranean in 2018. Most recently, a woman drowned off the coast of Bodrum, Turkey on Sunday while attempting to reach Kos, Greece via the Eastern Mediterranean route. The Turkish Coast Guard reports that 16 migrants were rescued from this incident. On Saturday, a 5-year-old Syrian boy drowned off the coast of Lebanon’s Akkar province after a boat carrying 39 migrants to attempt to reach Cyprus capsized.

IOM Spain’s Ana Dodevska reported Monday that total arrivals at sea in 2018 have reached 35,594 men, women and children who have been rescued in Western Mediterranean waters through 23 September (see chart below). IOM notes that over this year’s first five months, a total of 8,150 men, women and children were rescued in Spanish waters after leaving Africa – an average of 54 per day. In the 115 days since May 31, a total of 27,444 have arrived – or just under 240 migrants per day. The months of May-September this year have seen a total of 30,967 irregular migrants arriving by sea, the busiest four-month period for Spain since IOM began tallying arrival statistics, with just over one week left in September.

With this week’s arrivals Spain in 2018 has now received via the Mediterranean more irregular migrants than it did throughout all the years 2015, 2016 and 2017 combined (see charts below).

The HCG rescued a total 312 migrants and transferred them to the respective islands. Additional arrivals of some 248 individuals to Kos and some of the aforementioned islands over these past four days brings to 22,821 the total number of arrivals by sea to Greece through 23 September (see chart below).

Sea arrivals to Greece this year by irregular migrants appeared to have peaked in daily volume in April, when they averaged at around 100 per day. That volume dipped through the following three months then picked up again in August and again in September, already this year’s busiest month – 3,536 through 23 days, over 150 per day – with about a quarter of the month remaining. Land border crossing also surged in April (to nearly 4,000 arrivals) but have since fallen back, with fewer than 2,000 crossings in each of the past four months (see charts below). IOM’s Missing Migrants Project has recorded 2,735 deaths and disappearances during migration so far in 2018 (see chart below).

In the Americas, several migrant deaths were recorded since last week’s update. In Mexico, a 30-year-old Salvadoran man was killed in a hit-and-run on a highway in Tapachula, Mexico on Friday. Another death on Mexico’s freight rail network (nicknamed “La Bestia”) was added after reports of an unidentified man found dead on tracks near San Francisco Ixhuatan on 15 September.

In the United States, on 16 September, an unidentified person drowned in the All-American Canal east of Calexico, California – the 55th drowning recorded on the US-Mexico border this year. A few days later a car crash south of Florence, Arizona resulted in the deaths of eight people, including four Guatemalan migrants, on Wednesday. Two others killed included one of the vehicles’ driver and his partner, who authorities say had been involved with migrant smuggling in the past.