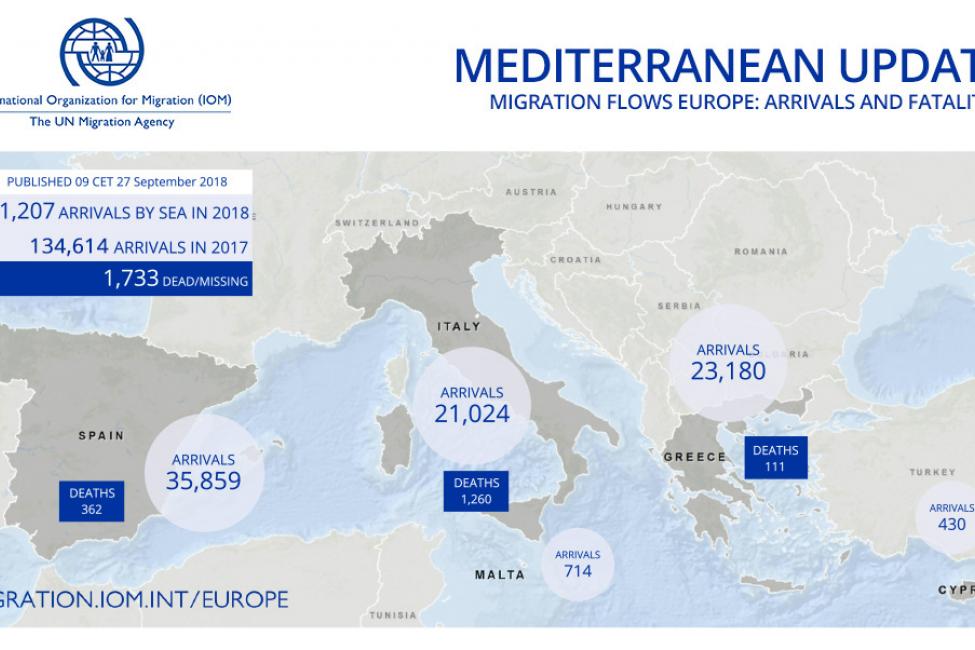 Geneva – IOM, the UN Migration Agency, reports that 81,207 migrants and refugees entered Europe by sea in 2018 through 26 September, with 35,859 to Spain – an increase of 600 to this destination since IOM’s last report on 23 September.

The region’s total arrivals through the recent weekend compare with 134,614 arrivals across the region through the same period last year, and 302,803 at a similar point in 2016.

Spain, with 44 per cent of all arrivals through the year, continues to receive seaborne migrants in September at a volume nearly twice that of Greece and nearly seven times that of Italy. Italy’s arrivals through late September are the lowest recorded at this point – the end of a normally busy summer sailing season – in almost five years (see chart below).

IOM Libya this week reported that on Monday, 24 September, the UN Migration Agency organized its first charter to Ethiopia from Libya’s Zintan airport, with a stopover in Egypt. A total of 137 stranded migrants were on board.

With the current volatile security situation and limited international flights due to the closure of Tripoli’s Mitiga airport, IOM managed a stopover for this charter in Alexandria, in coordination with IOM in Egypt and with the support of the Egyptian Ministry of Foreign Affairs. This was done to enable an additional 60 Egyptian migrants stranded in Libya to return home.

The stranded migrants included 12 women, six children, one infant and seven medical cases. Special assistance was also provided to four unaccompanied migrant children, to enable their reunification with their families. Of the total number, 111 migrants returned from detention centres in Tripoli and Zintan while 24 had been living in urban areas.

IOM organized land and air movements for the stranded Ethiopian and Egyptian migrants in coordination with the Libyan Directorate for Combating Illegal Migration (DCIM), respective consulates and IOM’s receiving missions.

Despite the fact that Mitiga airport in the capital has remained closed since last month due to the eruption of violence and fighting between the different parties to the conflict, IOM has managed to find alternative pathways to continue its return assistance via other cities such as Misrata, Zwara and Zintan.

“It would have been otherwise a challenging mission to assist a smaller group via commercial flights in light of the conflict in and around Tripoli and the closure of Mitiga International Airport,” said Ashraf Hassan, Voluntary Humanitarian Return (VHR) Programme Coordinator. “This charter was made possible thanks to the efforts of the local authorities at Zintan’s airport. The smooth collaboration between the authorities and ourselves ensured a well-coordinated, successful and safe return for the stranded migrants in Libya.”

Before departure, IOM staff conducted proper vulnerability screening, medical assessment and fit for travel check-ups, while facilitating exit visas for the waiting passengers. The migrants at the detention centres received food, non-food items (NFIs) and shoes prior to their final departure. IOM also provided both medical and additional operation escorts to further support vulnerable migrants on logistical matters on their journey.

Fathi was among the Egyptian migrants onboard Monday’s charter flight. After having spent seven months at a detention centre in Misrata and then transferred to Tariq Al Sekka detention centre in Tripoli, he decided to seek IOM’s Voluntary Humanitarian Return Assistance, as he felt homesick and wanted to reunite with his family. “I was thinking about my life back home with my family, when I saw IOM staff visiting the detention centre. I was very happy, and I immediately signed up to go home.’’

The flight departed Zintan airport and headed to Alexandria for the transfer of the 60 Egyptian migrants onboard before continuing towards Addis Ababa. Upon their arrival, all returnees would receive immediate assistance such as food and pocket money to cover their immediate needs including in-country onward transportation cost. The migrants are also eligible for further reintegration support, to start a new chapter back home.

This charter was funded by the Italian Ministry of Foreign Affairs and International Cooperation. Through the current year IOM has overseen the voluntary humanitarian return of 12,372 stranded migrants who have left Libya for their countries of origin. Since 1January 2017 IOM has assisted a total of 31,743 stranded migrants wishing to leave Libya to almost three dozen countries in Africa and Asia.

IOM Spain’s Ana Dodevska reported Thursday that total arrivals at sea in 2018 have reached 35,859 men, women and children who have been rescued in Western Mediterranean waters through 26 September (see chart below). IOM notes that over this year’s first five months, a total of 8,150 men, women and children were rescued in Spanish waters after leaving Africa – an average of 54 per day. In the 118 days since May 31, a total of 27,709 have arrived – an average of some 235 migrants per day. The months of June-September 2018 already have seen a total of 31,232 irregular migrants arriving by sea, with September not yet finished. This is the busiest four-month period recorded for Spain since IOM began tallying arrival statistics on irregular migrant arrivals by sea.

Land arrivals to Ceuta and Melilla, Spain’s two enclaves on the African continent, have totalled almost 4,800 this year; however, after peaking in the month of July, those numbers have dropped significantly over the past 57 days (see chart below). As IOM reported earlier this week, Spain in 2018 has now received via the Mediterranean more irregular migrants than it did throughout all the years 2015, 2016 and 2017 combined (see chart below).

On Thursday IOM researchers in the Western Balkans reported their latest Displacement Tracking Matrix (DTM) flow monitoring data that show more than 3,289 new migrants have been registered as arriving in Albania, Montenegro and Bosnia and Herzegovina between 1 and 25 September 2018. That is about thirteen times more than the average of 220 monthly arrivals reported in the countries concerned in 2017.
Between January and September 2018, authorities in these countries registered a total of 20,415 irregular entries. According to the available information on nationalities: Pakistan, the Syrian Arab Republic, the Islamic Republic of Iran and Iraq are the most commonly reported origin countries. The distribution of migrants by nationality varies between the three countries on the route. Almost half (42%) of the 15,537 irregular migrants registered in Bosnia were registered as Pakistani nationals. Another 41% of the overall registered caseload were nationals of the Islamic Republic of Iran (13%), the Syrian Arab Republic (12%), Iraq (8%) and Afghanistan (8%).

In Montenegro and Albania, Syrian nationals comprised the majority (44% and 52% respectively), followed by those who arrived from Pakistan (19% and 15% respectively), Algeria (19%) in Montenegro and Iraq (15%) in Albania. Such differences in the nationality structure of registered migrants are explained by the fact that migrants in Bosnia and Herzegovina also enter from Serbia and that certain groups of migrants from Montenegro continue not only toward Bosnia and Herzegovina but toward Serbia as well.

Moreover, since March 2018, DTM has been monitoring outgoing flows from Albania to Montenegro in the Shkoder region. According to the available data there were 1,044 migrants apprehended while attempting to exit Albania irregularly. Similarly, to the nationality breakdown of registered arrivals, outgoing flows were predominantly composed of migrants from the Syrian Arab Republic (39%) and Pakistan (34%).

The increase in arrivals is also observed in the former Yugoslav Republic of Macedonia, where authorities registered a total of 2,361 irregular migrants between January and September, six times more than the 383 registered in the same period 2017 and four times the 547 registered in the whole of 2017. More than a half of all registered irregular migrants were from the Islamic Republic of Iran (54%). The remaining nationality groups in the top five are Afghanistan (11%), Pakistan (10%), Iraq (8%) and Libya (6%).

On Thursday, IOM Greece reported that over three days (24-26 September) this week the Hellenic Coast Guard (HCG) units managed three incidents requiring search and rescue operations off the islands of Samos and Rhodes. The HCG rescued a total 118 migrants and transferred them to the respective islands.

Additional arrivals of some 241 individuals to Lesvos and Kos and some of other islands over these past three days bring to 23,180 the total number of arrivals by sea to Greece through 26 September (see chart below).

Land arrivals to Greece this year by irregular migrants appeared to have peaked in daily volume in April, when they averaged over 130 per day. That volume dipped through the following five months. Sea arrivals are peaking in September – already this year’s busiest month, with five days remaining – to 3,985 through 26 days, or 150 per day. The combined total of land and sea through August was 31,361 (Sea: 19,195;  Land: 12,166) or 130 per day (see charts below).

IOM Cyprus’ Dimitrios Tsagalas reported this week that 428 irregular migrants and refugees have made their way by sea to the island, over 120 of them during the period of 17-25 September. The migrants and refugees have been variously identified as Syrian, Kurdish and Cameroonian. The largest group – 65 men, women and more than two dozen children – arrived after being spotted on a boat on 20 September off Cape Greco.

Others have arrived via the Ledra Palace checkpoint in the UN buffer zone in Nicosia. On 25 September 18 people, all believed to be Syrian nationals, arrived in a boat spotted off Ayia Thekla, in the Sotira region. According to media reports, the boat left Tartus in Syria on 24 September. There also have been media reports about a boat with 14 Syrian nationals spotted in the Apostle Andreas region in the northern part of the island. These refugees reportedly were turned back to Turkey.

IOM’s Missing Migrants Project has documented the deaths of 1,733 people on the Mediterranean in 2018. Most recently, three people died trying to cross the Western Mediterranean to reach Spain. A 19-year-old Moroccan woman was shot, and three others were injured on 25 September, after they departed by sea from the Moroccan city of Fnideq with 20 others. Local NGOs have confirmed her death and provided more details about her identity. Hayat (which means “life” in Arabic) was born in Tetouan and was studying law at the University of Martil. She leaves behind her parents, two brothers and a sister.

On the same day, Spanish authorities recovered the body of an unidentified man of Sub-Saharan African origin on Alboran Island, around 90km south of the Spanish province of Almería. A few days earlier, the body of a woman was recovered 1.5 nautical miles north of Punta Almina, Ceuta. This is the second body recovered at sea near the Spanish enclave of Ceuta in recent days. In the past two weeks, the remains of 11 migrants were recovered at various locations on the coasts of Morocco and Spain.

These cases are not connected to any known shipwreck, an alarming trend indicating that shipwrecks may occur undetected and that still more bodies will be found.

Worldwide, IOM’s Missing Migrants Project has recorded 2,744 deaths and disappearances during migration so far in 2018 (see chart below). Beyond the Mediterranean, several deaths in other regions have been recorded since Monday’s update.

In Europe, one migrant drowned in the Port of Calais as he was trying to board a ferry bound for the UK on 23 September. In the United States, the remains of four migrants were recovered in the past week. On 20 September, US Border Patrol officers recovered the remains of two migrants in less than 24 hours on ranch lands near Falfurrias, Texas. A man drowned on the Río Bravo on 25 September; his body was recovered near Peñitas, Texas. On the same day, a 39-year-old man from El Salvador was found dead on the side of a road in Donna, Texas.