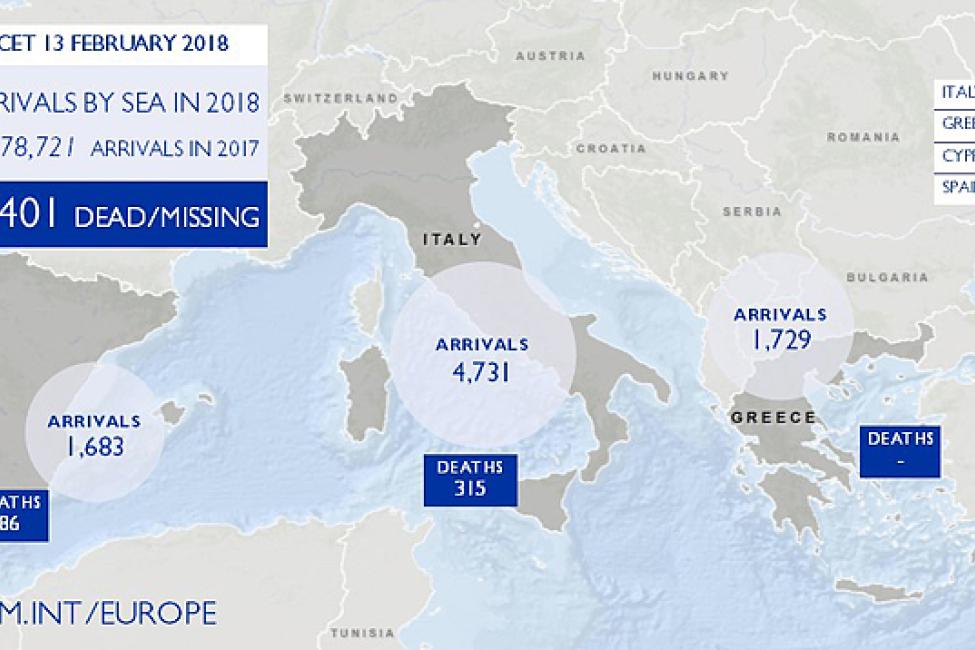 Geneva – IOM, the UN Migration Agency, reports that 8,154 migrants and refugees entered Europe bysea through the first six weeks of 2018. This compares with 12,358 arrivals across the region through the same period last year. On Monday (12 February) IOM Rome reported Italy’s official Ministry of Interior figures indicate some 4,731 migrants arrived by sea to Italy this year, which represents a steep decline compared to the 9,448 arrivals recorded during the same period last year.

After tracking January arrivals similar to those of 2017 and 2016 (see chart, below) through the first week of February, Italian authorities have recorded just 549 arrivals in February 2018, considerable fewer than came in during the same months of earlier years. IOM Greece’s Kelly Namia reported Monday  that over the four days (7-10 February), the Hellenic Coast Guard reported there were at least two incidents requiring search and rescue operation off the island of Lesvos and Samos. The Coast Guard rescued  74 migrants and transferred them to those islands.

Namia reported that during this period a total of 156 irregular migrants arrived in Greece. These landings bring to 1,729 since January 1, for an average of just over 42 persons per day.

IOM Spain’s Ana Dodevska reported that total arrivals at sea in 2018 have reached 1,683 men, women and children who have been rescued in Western Mediterranean waters through 11 February.

She also shared the following data from Spain’s Ministry of Interior for Sea Arrivals since 2015: Over the past five days, 11 migrants died in different incidents in the Western Mediterranean. On 9 February, Spain’s maritime rescue service rescued 82 people and recovered three bodies from two boats during an operation southeast of Alborán Island. The survivors, including eight women, were taken with the remains of the three deceased to the port of Almería.

On 11 February, Salvamento Marítimo rescued 29 migrants, including a pregnant woman, from a sinking boat off Cabo Tres Forcas in Nador, Morocco. According to the testimonies of survivors – who were brought to the port of Motril (Granada) – five people went missing during the voyage. Spanish NGO Caminando Fronteras reported on 12 February that an 11-year-old girl drowned in the Gibraltar Strait while attempting to reach Spain. Additionally, two bodies have been found off the coast of Mostaganem in Algeria over the past few days.

In the Horn of Africa, 25 Ethiopian migrants are missing and presumed dead, after being forced into the water off the coast of Yemen on 8 February. They were travelling on one of four boats that brought over 600 Ethiopian men and women to the coast of Yemen’s Shabwa governorate.

On the Myanmar/Bangladesh border, three Rohingya children drowned on 8 February as they were trying to cross from Mangdaw in Myanmar to Teknaf in Cox’s Bazar, Bangladesh.

On the US/Mexico border, one young man drowned on 10 February crossing the Río Bravo near Reynosa in Tamaulipas, Mexico – bringing to eight the known drownings on the river so far, this year.