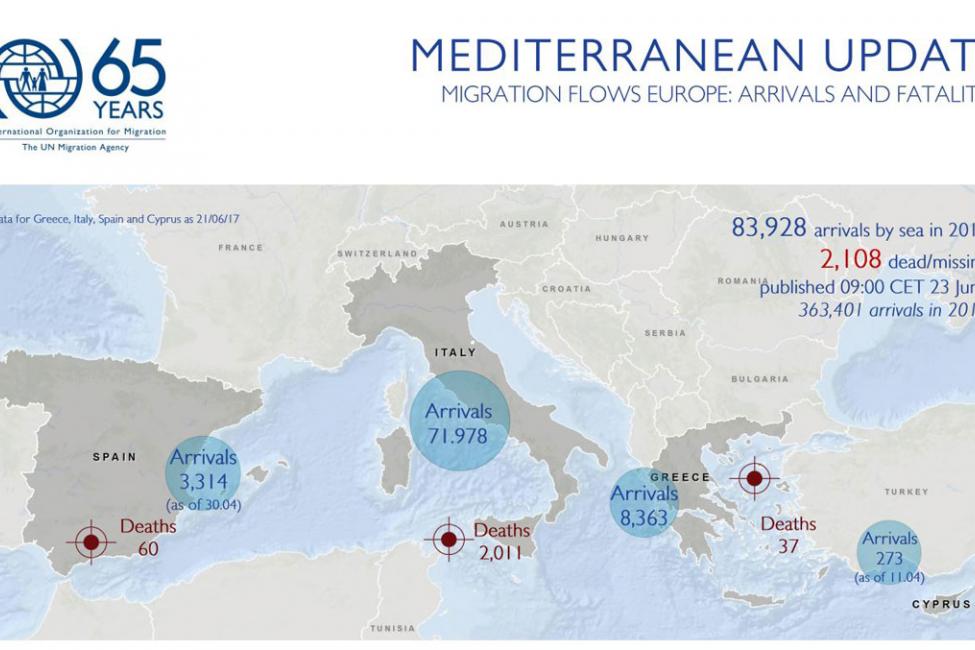 Switzerland – The UN Migration Agency (IOM) reports that 83,928 migrants and refugees entered Europe by sea in 2017 through June 21, with almost 85 per cent arriving in Italy and the remainder divided between Greece, Cyprus and Spain. This compares with 215,997 arrivals across the region through 21 June 2016.

IOM Rome spokesperson Flavio Di Giacomo reported that some 180 migrants were rescued yesterday on the open sea and are being brought to land in Italy. He added more than 2,500 migrants who had been rescued in the past few days (including last weekend) arrived safely and have been transferred to different locations in Italy.

IOM Italy also reported this week that the total number of Syrian migrants registered as having arrived by sea is 1,164 – making Syrians the fourteenth most common nationality. In 2016 1,200 Syrians landed by sea in Italy.

IOM Libya Christine Petré reported Thursday (22 June) that the remains of 18 migrants found in Garaboli were retrieved and buried by local citizens. Two migrants were reportedly found alive and were transferred to Trig al Seka detention centre in Tripoli. On the same day, the remains of five men were found in Tajoura, west of the Libyan capital Tripoli.

As of 22 June, 10,034 migrants were rescued in Libyan waters and the remains of 303 women, men and children have been found along the Libyan coast.

Worldwide, the IOM Missing Migrants Project (MMP) reports that there have been 2,848 fatalities through 21 June (see chart below) with the Mediterranean region accounting for the largest proportion of deaths – over 70 per cent of the global total.

MMP regional figures for today reflect the following inclusions since Tuesday (20 June): two incidents on the US/Mexico border; a train accident in Central America; 110 missing off the coast of Zuwarah, Libya, as reported by survivors rescued by Libyan fishermen last Saturday; seven missing in the Central Mediterranean as reported by survivors taken to Messina, Italy; and five dead off the coast of Sabratha, Libya.  These data do not include the 23 victims newly reported in Libya on Thursday, nor reports of three bodies discovered this week near Falfurrias, Texas.