Migrant Arrivals in Europe Significantly Down Despite Aquarius Controversy 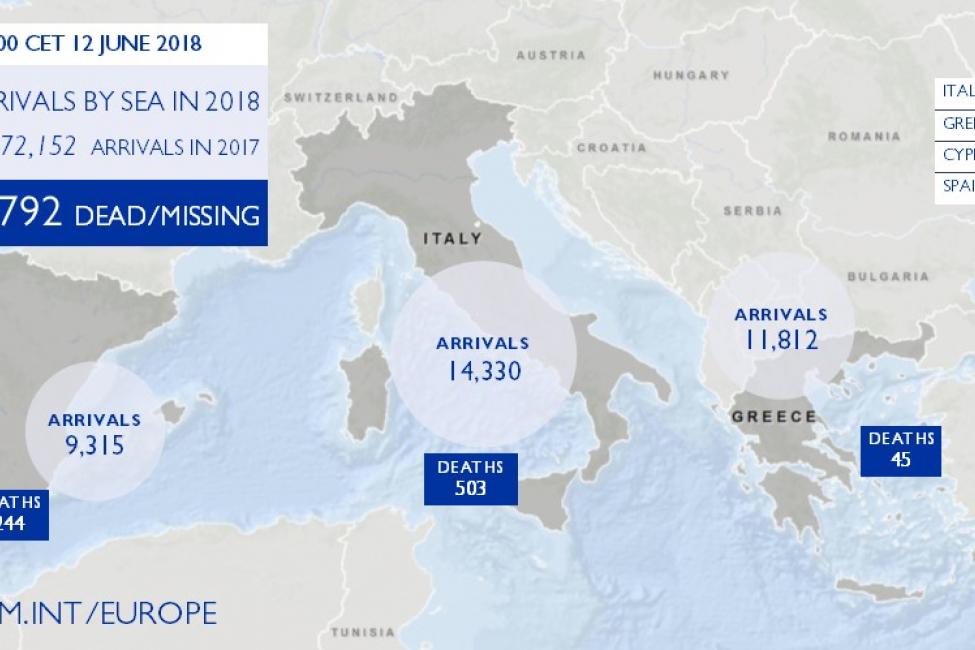 As the Aquarius rescue vessel makes the three-day journey to Spain, IOM, the UN Migration Agency, reports that 35,504 migrants and refugees entered Europe by sea as of Sunday, 10 June 2018.

Geneva – As the Aquarius rescue vessel makes the three-day journey to Spain, IOM, the UN Migration Agency, reports that 35,504 migrants and refugees entered Europe by sea as of Sunday, 10 June 2018. This compares with 73,748 arrivals across the region during the same period last year. So far this month, 2,746 arrivals to Italy, Greece and Spain have been recorded, the majority of which arrived in Spain. The 14,330 migrants, who are registered as having arrived by sea to Italy this year is 76.81 per cent lower than that reported last year in the same period, which was recorded as 61,779.

Over the weekend, over 1,420 migrants were rescued at sea: the nearly 630 migrants on Saturday aboard Aquarius welcomed by Spain, as well as an additional over 790 on Sunday, who were brought to Italy.

IOM’s Director General William Lacy Swing has welcomed the decision by Spain to offer a safe harbour to over six hundred migrants – including scores of children and seven pregnant women – who had been waiting aboard the Aquarius since Sunday (10/06). “Stopping one boat or more in the Mediterranean Sea is not an answer to Europe’s migration challenges. A comprehensive approach to migration governance is needed, combining opportunities for safe and orderly movement, humane border management and countering migrant smuggling and trafficking," said Director General Swing. Read full statement here. In Libya, on Saturday (09/06), IOM provided emergency health assistance, including pregnancy check-ups and treatment for fuel burn wounds, to 262 migrants (196 men, 48 women, 18 children) upon their return to shore by the Libyan Coast Guard. IOM also distributed food and water upon disembarkation, as well as blankets, mattresses and hygiene kits. Some 110 of the migrants had departed from Sabratha in one rubber boat with most coming from Mali, Nigeria, the Ivory Coast, Guinea and Cameroon. The remaining 152 migrants, departed from Garaboli and Zwara in two rubber boats, with the majority from Mali, the Ivory Coast, Guinea and Senegal. IOM continues to provide humanitarian assistance to them in the detention centres where they are now held, including voluntary humanitarian assistance, while also advocating for the closure of the centres. So far this year, 7,114 migrants have been returned to Libyan shores by the Libyan Coast Guard.

Worldwide, IOM’s Missing Migrants Project has recorded 1,417 people who died or went missing while migrating in 2018. In the Mediterranean alone, 792 people have lost their lives at sea since the beginning of the year. Most recently, four people died on the Western Mediterranean route between North Africa and Spain: Spanish maritime safety agency rescued 49 people and recovered 4 bodies from a sinking boat off the coast of Melilla on 10 June. On 2 June, a boat carrying approximately 180 people capsized off the coast of Kerkennah island, in Sfax, Tunisia. As of Saturday, 9 June, Tunisian authorities had recovered 81 bodies, of which 49 had been returned to their families. The bodies of 31 people haven’t been found yet.

There were several other additions to the Missing Migrants Project database since last Friday’s update. In Italy, the remains of a young migrant were found inside a truck in the A57 motorway near Venice on 6 June. The authorities believe that he likely hid in the truck in Greece before it boarded a ferry headed for Italy. On the Greece-Turkey border, 5 people died and 11 were injured in a vehicle accident in the Egnatia Odos highway, near Kavala, Greece. Three Iraqi children, a Syrian man, and another man of unconfirmed nationality lost their lives in this tragic accident on 8 June. On 10 June, a 21-year-old Afghan man died in the Port of Patras after hiding in a truck in an attempt to reach Italy, the Hellenic Coast Guard reported. In France, one migrant was killed after being hit by a vehicle in the A16 motorway, near Grande-Synthe, Calais.

On the United States-Mexico border, the remains of a 49-year-old Mexican man were found in a ranch in Maverick County, Texas on 7 June. He had died of dehydration shortly after crossing the border.

Missing Migrants Project data are compiled by IOM staff but come from a variety of sources, some of which are unofficial. To learn more about how data on migrants' deaths and disappearances are collected, click here.