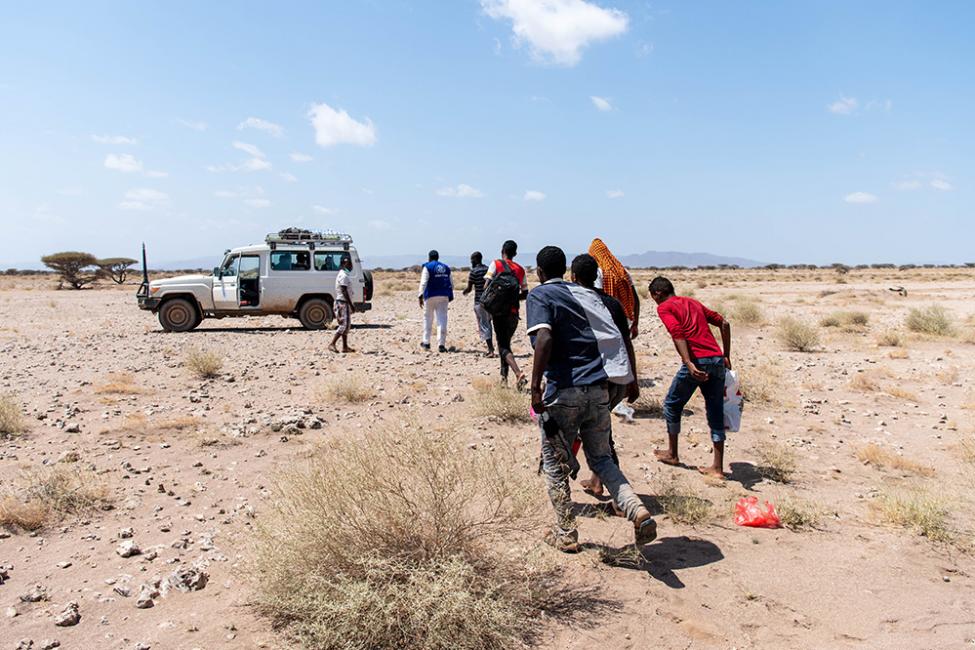 Djibouti – New funding from the European Union (EU) will help the International Organization for Migration (IOM) and partners accelerate assisted voluntary return and reintegration of vulnerable and stranded migrants in the Horn of Africa, a region with some of the world’s busiest and most perilous migration routes.

“The top-up funding will enable the programme to further solidify the last four years of collaborative efforts and learning by partners and IOM towards setting new standards for migrant protection and reintegration,” said Mitsue Pembroke, the deputy regional coordinator of the EU-IOM Joint Initiative for Migrant Protection and Reintegration in the Horn of Africa (EU-IOM Joint Initiative).

The latest funding of EUR 5.95 million raises the total allocation to the EU-IOM Joint Initiative to EUR 64.7 million.

So far this year, 99 migrants have died in the Horn of Africa, while at least another 30 Ethiopian migrants perished in a shipwreck off the coast of Yemen in July, according to IOM’s Missing Migrants Project which tracks migrant deaths, including refugees and asylum-seekers who cannot be accounted for along migration routes worldwide.

The new funding also will enable capacity building for government and other partners and boost migration data collection and analysis to support evidence-based programming. Information and awareness raising will also be supported.

The Horn of Africa has three major international migratory routes – ‘the Eastern Route’ to the Arabian Peninsula, and in particular Saudi Arabia, through either Obock in Djibouti or Bosaso in Somalia; ‘the Northern Route’ through Sudan towards northern Africa and Europe; and ‘the Southern Route’ towards the southern part of the continent, in particular South Africa.

The Eastern Route accounts for the largest number of irregular movements and fatalities in the region.

Ethiopian men make up 72 per cent of migrant arrivals on the coasts of Yemen, according to IOM’s report  A Region on the Move 2020, but many unaccompanied migrant children (UMCs) are also making the dangerous journey. The proportion of UMCs rose from 6 per cent in 2019 to 9 per cent in 2020.

Apart from dangerous sea crossings, dehydration from walking in desert conditions in Djibouti and Somalia is another risk factor.

Since March 2017, the EU-IOM Joint Initiative has supported more than 7,000 migrants in transit and destination countries across the region with life-saving assistance, enabling them to return safely and with dignity to their countries of origin.

Nearly 9,000 returning migrants have been helped to resume their lives in their communities of origin in Ethiopia, Somalia and Sudan, as well as in Djibouti, Eritrea, Kenya, South Sudan and Uganda. Assistance has included the establishment of 42 community projects, with an overall target population of 216,000.

The EU-IOM Joint Initiative has also allowed the secondment of migration specialists to the African Union and the Intergovernmental Authority on Development.

In addition, funding has gone to support a network of one-stop centres, located at key points along the major migration routes, that provide vulnerable and stranded migrants with shelter, food, personal hygiene products, in addition to health and psychosocial assistance.

About the EU-IOM Joint Initiative

Launched in December 2016 with the support of the European Union Emergency Trust Fund for Africa (EUTF), the programme brings together 26 African countries of the Sahel and Lake Chad region, the Horn of Africa, and North Africa, along with the European Union and the International Organization for Migration, around the goal of ensuring that migration is safer, more informed and better governed for both migrants and their communities.