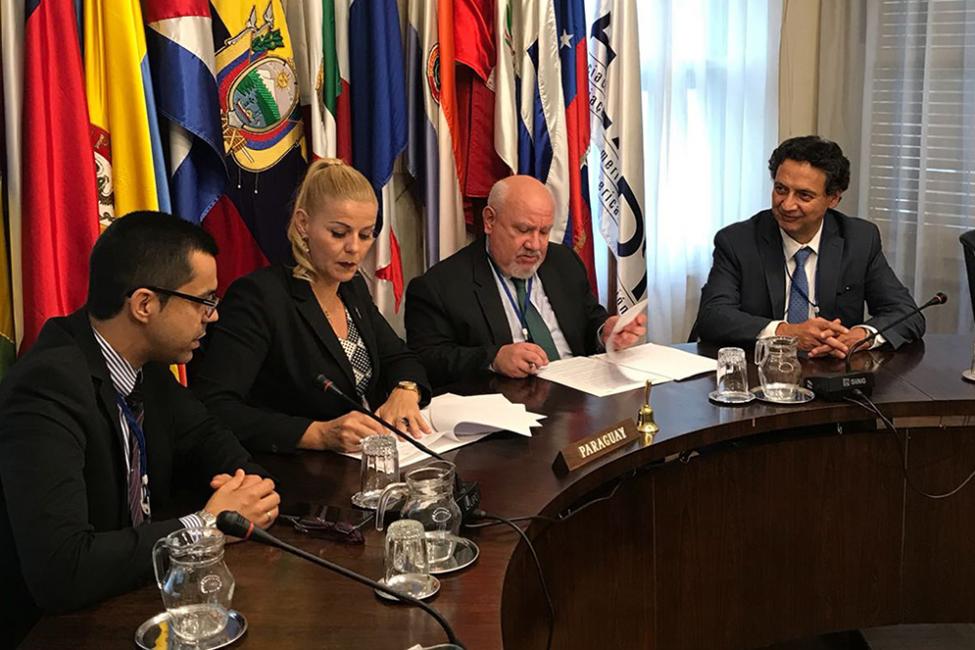 Asunción – IOM, the UN Migration Agency, and the General Directorate of Migration (DGM by its Spanish acronym) of Paraguay, signed a cooperation agreement that will allow the expansion of the Personal Information and Registration System (PIRS) and the Migration Information and Data Analysis System (MIDAS) in the country.

The agreement was signed this week (8/05) in Montevideo, Uruguay, by the IOM Regional Director for South America, Diego Beltrand and the General Director of Migration of Paraguay, Maria de los Angeles Arriola. The document was also signed by the Minister of the Interior of Paraguay, Ariel Martínez Fernández and the IOM Paraguay Head of Office, Richard Velázquez.

Since 2016, IOM in Paraguay and the DGM have worked on the implementation of the PIRS/ MIDAS in several border posts in the country.

With the installation of this system, IOM has contributed to the strengthening of the DGM’s migration management capacity by increasing the regular registration and control of migration movements in Paraguay through periodic reports, access to biometric information, online supervision, access to alerts and keeping travel records of the passengers.

The system allows to have more detailed and complete information on the passengers that cross the borders, thus contributing to safeguarding national security. In addition, with the inclusion of peripheral computer equipment, such as passport readers, fingerprint readers and web cameras, the system allows gathering of more data that may be useful to manage adequate migration policies, based on complete information.

The system previously used by the DGM did not allow the interconnection of databases between the different border posts. It is, however, possible with the PIRS/MIDAS, thus allowing the exchange of information in real time.

In addition, the use of passport readers has allowed the DGM to move from a manual systematization of passenger data, to a digital and automatic data systematization, which allows the minimization of errors in the process.

"The implementation of the PIRS/MIDAS is an important and necessary step for the modernization of the migration control since it contributes to the strengthening of national security and to the optimization of the works of registry of entrance and exit of the country. This all is in benefit of Paraguayans and foreigners who travel in the national territory,” said the Director General of Migration, Maria de los Angeles Arriola.

IOM Paraguay Head of Office, Richard Velázquez, emphasized: "The progress that Paraguay has made since 2016 in terms of collecting migration information for the development of public policies has been very important.” He added, "With this agreement, we reaffirm our commitment to the Government of Paraguay to implement the system in all the border posts in the country”.

Initially the system was installed in 2016 at the International Airports, Silvio Pettirossi and Guaraní, in the cities of Asunción and Ciudad del Este respectively. Later, in a second phase of implementation, it was installed at the San Roque González de Santacruz Bridge of Encarnación and at the International Bridge of Friendship in Ciudad del Este at the end of 2017.

Currently, work is in progress to install the system at Puerto José Falcón, located in the city of Jose Falcón. The system will be extended to the cities of Alto del Guaira, Pedro Juan Caballero, Alberdi, Ita Enramada, Pilar, Teniente Infante Rivarola.