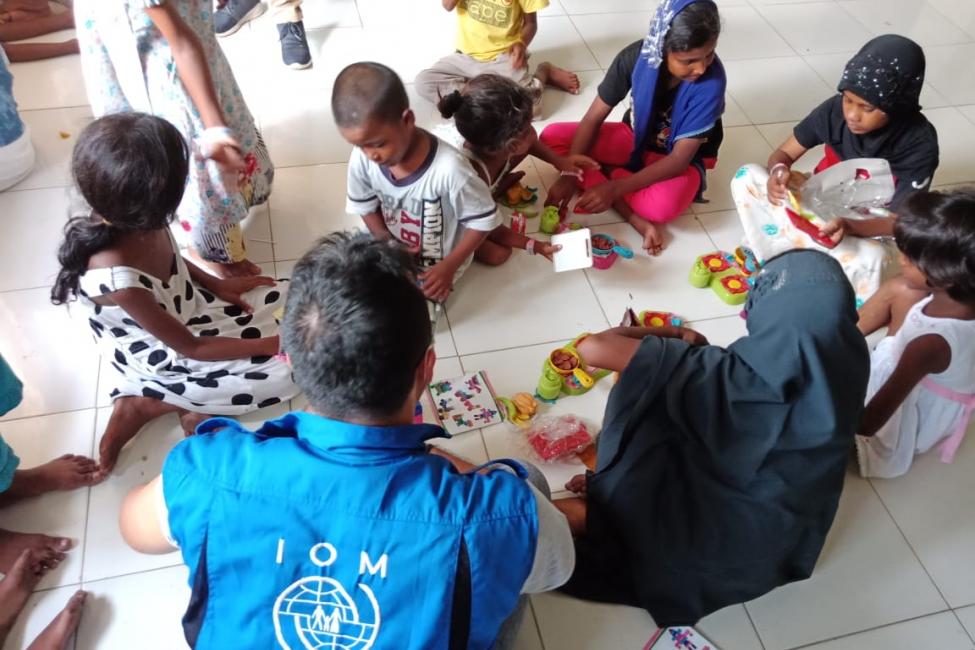 North Aceh, Indonesia – IOM Indonesia continues to provide round-the-clock care to the 99 Rohingya rescued and allowed to disembark in North Aceh last week, as concerns are being raised about another boat currently at sea with an estimated 500 Rohingya on board, according to authorities in Jakarta.

Malaysian officials have also reported at least 300 are on a vessel off the coast of Koh Adang island in Thailand.

No further details are available but roughly 1,400 Rohingya have been stranded at sea during the 2020 sailing season, which typically ends with the arrival of the monsoon in late May. According to various estimates at least 130 have died.

At the centre in Lhoksemauwe, Aceh, where the Rohingya are being housed, the IOM team – a nurse, an interpreter and psycho-social and operational staff – are working alongside other partners to provide much-needed support to the group who have expressed gratitude for the support they have received from the local community after more than 120 days stranded at sea.

“With the hospitality of local people, I am happy,” said a 22-year-old woman.

“Getting food on time, I can sleep without fear. I can also take a shower. But I miss my siblings and mother in Bangladesh and my husband in Malaysia. It would have been better if I could talk with them over the phone.”

A 17-year-old boy said: “Our boat was floating in the sea for over four months. I thought, ‘we are going to die in the boat and my dead body would be thrown in the sea’. But finally, we could land in a country; I am alive. I feel so happy to be alive.”

In addition to food and water, IOM and partners are also providing WASH support through the provision of water tanks and personal hygiene kits. IOM has also ensured that the group has a high level of COVID 19 awareness and prevention information and our medical teams are working in close coordination with government health entities, filling a gap in health care referrals and hospitalization needs.

“IOM teams have been on the ground, working with local community and government, and providing direct support to the new arrivals,” said IOM Chief of Mission Louis Hoffmann. “After four months at sea, and as they recover their health and their spirits, more details have begun to emerge in particular about how they left and the stressful conditions they had to endure to make this journey.”

Hoffmann commended the local community for their role in ensuring that the Rohingya were rescued and brought to land. He also lauded the efforts of the local authorities together with various agencies operating alongside IOM in north Aceh.

“The past several months of the sailing season have resulted in scores of lives lost at sea, as people have sought protection and refuge in the region. The gesture and support from the local community in Aceh, and the coordination that’s been happening across the national government to allow for this disembarkation have been, in a word, life-saving,” Hoffmann said.

During the 2015 Andaman Sea crisis, Indonesia agreed to accept several stranded vessels loaded with migrants on humanitarian grounds. A total of 1,820 Rohingya and Bangladeshi nationals were assisted by IOM in Indonesia during the crisis.

IOM’s work to support the Rohingya in Aceh is being funded by the European Union Civil Protection and Humanitarian Aid (ECHO).

HERE IS THE VIDEO